Microreview [Book]: Night of the Mannequins by Stephen Graham Jones

Night of the Mannequins might be full of shaky anxiety, but its authorial voice is always sturdy. 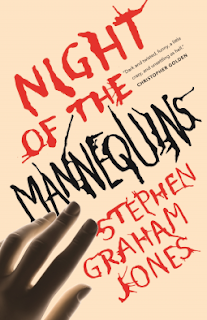 Certain mental illnesses can color your perspective. Things become skewed and distorted. It's akin to having cinema seem more than just a credible imitation of reality, and instead feel like an overwhelming truth. And with a certain viewpoint, seeing an effigy of a human can convince you that you’re looking at a real, live one. But it’s not just what’s around you that becomes distorted—your interiority can become jagged, making you believe things to be true that are preposterous to most. That mindset can make crimes committed not from ill intent, but with a humanitarian bent--good intentions meshed with harmful actions. Real humans feel like simulacrums and irrationality coils around and obscures all else. Night of the Mannequins tackles that serious issue in a bloody, sometimes very extreme way but its intelligence and depth barely waver.

I’m going to be vague in my synopsis, because part of the fun in Night of the Mannequins is experiencing a specific shift in the story. The novel follows Sawyer – a teenage boy – and his friends. The group discover a mannequin in a creek, and take it as their plaything, developing a comical kinship with it, almost treating it like it’s part of their team. After they use the mannequin for a prank in a movie theatre, it walks right out of the theatre, somehow gaining the ability of mobility. That sight gnaws at Sawyer and devolves him into a spiral of desperation, weeping, and the desire to go to overreaching lengths to minimize the damage he fears the mannequin will cause. Then, a slasher-esque story with psychological undertones ensues.

When mental illness is covered in horror, authors sometimes find it easy to label those with stigmatized ailments as categorically evil. Thankfully, Night of the Mannequins doesn’t do that. All the horrors propelled by mental illness are done from characters with the intense compulsion to be utilitarian and as humane as possible. It humanizes mental illness by delving deep into the thought process of how someone could spiral down into a belief that causes harm, through a rationalization of charitableness.

That rationalization is underscored by the novel’s strong narratorial voice. The tone can pinball from humorous, to heartbreaking, to poetic, to horrific, without jarring tonal shifts. Despite the jumble of contrasting thoughts that twist and overlap like a coiled chain, the story never loses focus and barely stretches out into barren patches of inactivity. When the plot does halt at a standstill, it’s to illustrate the racing, repetitive thoughts from a certain character, which is easily apparent, and doesn’t justify making the reader go through the same line of thought again. The character’s recursive, swirly thoughts are established early on, and would be better if they weren’t hammered home.

The side characters are aptly established for a novella-sized length, but because of the skewed perspective of the story, I never really got a sense of who they were. I can’t fault that too much because it’s a side effect of the premise, but I think there are still ways to showcase and protrude their personality forward under an otherworldly lens.

Fiction is often an exercise in having a real author extract kernels of truth from unreality. The more kernels extracted, the more hard-hitting and real those stories become. And if the story is done right, for a little while we almost forget that what we’re reading or watching isn’t real. Night of the Mannequins takes that all-encompassing delusion that we all have forward and shows a perspective that is completely mired in unreality. But just like how most people cheer on the heroes of a book or movie, this character is moved to do what they think is the right thing and cheer on the seemingly right side. Night of the Mannequins could easily be a vapid slasher novella that keeps you entertained but fades from your memory immediately after reading. But Stephen Graham Jones adds nuance to create a pleasing simulacrum of slasher tropes and makes his story all the better for it.

Bonuses: +1 For a clever meshing of B-movie and “arthouse” tropes.

Negatives: -1 For a mixed bag of character development.
-1 For a slightly drawn out midsection.