The Bone Shard Daughter brings a twisting story of a crumbling Empire run on a magic slowly destroying its citizens, with the Emperor’s daughter, an island governor’s child, and a smuggler trying to find their way through an increasingly dangerous world. 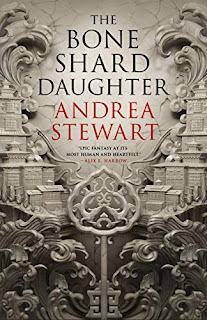 Lin has a problem. She is the daughter of the Emperor, an Emperor who has increasingly isolated himself from others and even the rule of his empire. Instead of making decisions, he has devolved much of his decisions to the animated intelligent constructs he has created. For, you see, these constructs can be as simple or small as a rat-like spy, or with the seeming intelligence of a person. But Lin is the Emperor’s Heir, and both she and her brother Bayan are striving against each other, the decay of the empire, and to learn their father’s magic before all is lost.

Phalue has a problem. As the daughter of a governor of an island in the Empire, she has responsibility, duty and like Lin, is trying to keep it all together. Her father is not popular on Nephilanu island but she is. And then there is Ranami, the woman she loves. When she is kidnapped, Phalue might do anything and everything to save her. That might well include learning to oppose her father and his rule and upend the society on her island.

Jovis also has a problem. She’s a smuggler and a good enough one to be on the Empire’s radar as a threat. She really has no bounds, no ties to anyone or anything, except chasing rumors of a ship with blue sails that might have the woman she loves aboard. Other than that, she has no ties whatsoever in a positive way, but perhaps the underworld organization chasing her. But when the injustice of the Empire keeps forcing her to act, Jovis is very reluctantly forced into a new path.

The stories of Lin, Phalue and Jovis, and come together in the epic fantasy The Bone Shard Daughter by Andrea Stewart. The trio of characters above mostly do not have any connections until later in the book, but their stories, personalities and relationships drive the action in the book. The novel’s focus on character-driven plotting is a real strength of the novel and Stewart takes pains to provide a set of sympathetic characters with real problems and issues for the reader to invest in.

Take Lin. Lin is in a continual race with her brother for knowledge and the ability to keep on top of what her father expects of her, even as the untenability of her father’s Empire and what that means for her and her position. That’s a perfect recipe for drama and putting the screws for Lin to have to act. Lin is indicative of the other characters' plots in that the author knows how to force the characters into changing their circumstances, and in so doing reveal Lin as someone who is strong enough and determined enough to defy her father and strive for herself. Her narrative is the primary one in the book, and Lin feels right, as a character and a driver of the narrative. Too, her story has the most secrets to reveal, about herself, and her world. And the author keeps drawing the reader forward with those twisting secrets as well.

Take Phalue and Ranami. Phalue’s romance with Ranami is a classic template of using a relationship to have a character awaken to the world around them, to see the problems and issues that are undermining her home and existence. What starts off as a simple theft of caro nuts to help local farmers grows by degrees into a larger rebellion against all what Phalue’s father is and stands for. But how do you keep a relationship together under such circumstances? Phalue and Ranami’s story very interestingly explores a relationship under fire.

And then there is Jovis. A smuggler wanted by the Empire, having formerly been a navigator in the Imperial forces? A smuggler who has gangsters after her for non payment? A smuggler who gets a nonhuman companion, Mephi, and learns that she really does have a heart of gold at the bottom of her soul? For me, I kept thinking of Han Solo in the Star Wars verse, but Jovis is not a straight up expy by any means. She has a suite of skills and abilities that are different, underneath that core of resistance to getting involved or tied to anyone or anything. Getting tied to saving children from the Bone Shard required Tithing Festival--she doesn’t want to do it. It’s not her deal at all, and yet she finds herself and again and again getting a chance to make the right choice. And like Lin and Phaule and Ranami's stories, the author does well in twisting the screws when needed. A real strength of the writing is to make you care about these characters deeply, and then plunge them into hard bargains and hard choices.

There are lots of interesting worldbuilding and story beats at work here, too. Lin’s story felt for me a bit like parts of Gideon the Ninth. Lin strives hard to find out the mystery of how to make and construct the bone shard magic of the constructs, complete with mysterious locked rooms, guardians, and conflicts, particularly with my brother. I thought back to the squabbling necromancers in Muir’s book and I can see resonances in style and theme, especially given the cost of the bone shards themselves. With Jovis, we get to see the Empire at large and find some of the intriguing and weird nature of the world--such as the fact that the islands of the Empire apparently move and migrate on their own. We don’t get an explanation as to how or why, really, but the fact that islands move relative to each other ties nicely to plot and circumstance in the novel. And in addition, even more than Lin’s story, we see the costs of the Empire’s bone shard magic on the citizenry. Compare this to Phalue and Ranami, the story of two lovers from very different circumstances, brought together in a plot of rebellion against Phalue’s father. We get intense emotional relationship building between them, and get to see the mechanics of just how the common people feel about the Empire in general and what might be done about its tyranny. The price of colonialism and its costs are excellently explored in their narrative.

One excellent plotting bit is another, infrequent point of view--a mysterious character, “Sand”, on a distant desert island, with a distinct lack of memories about life before picking mangoes. Who is she, really and why is she on this desert island picking fruit? The shortest of the four point of view, the revelation of who she really is and why she is there slowly unfolds throughout the novel There are plenty of other secrets in the novel, and not all of them answered, either. It’s a complex and complicated world, and some bits seem deliberately messy and not tied off with a bow. Given the ending, which doesn’t quite close things off but clearly points to future novels set in this verse, it is clear that Stewart is ramping up conflicts and problems for those future novels.

While there is a bit of roughness in the character beats in a few cases that felt a little discordant, there is a lot to love in The Bone Shard Daughter. I want to know more about the world and how it all works, especially the stuff only hinted at, and to see where her core set of characters, including “Sand”, go from here. More, please!

Bonuses: +1 for intriguing worldbuilding, from the magic system to migrating islands
+1 for an overall strong sense of character driven story arcs.

Penalties: -1 Some noticeable roughness with a couple of the character beats.