A gentle, joyful experience that doesn't shy away from the complexity of its central premise 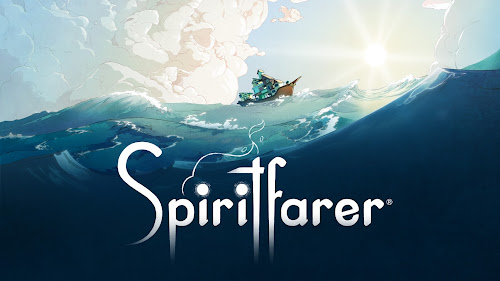 CW: Discussions of death, illness, some references to abuse and trauma, ableism. For a fuller discussion of themes, see the paragraph beginning "Content Note" below.

It took one sentence and two screenshots from someone else in a Discord group to make me realise I needed Spiritfarer in my life. The screenshots were of a set of ghostly characters in a factory, talking about tearing down capitalism and seizing the means of production. The comment was about the experience of escorting their first in-game friend into the afterlife, and letting them go. Anti-capitalism, cute ghosts, and gentle but ever-present exploration of death and loss would have sold me on their own, but then I learned that the entire game was set on a boat and my heart was lost entirely.

Spiritfarer opens with you, Stella, and your cat Daffodil, inheriting the role of Spiritfarer. Your task, from this point is to find lost spirits in the strange realm you've ended up in, and bring them to the Everdoor, the bridge between this reality and the next. Before you do so, you need to guide them through their final tasks, helping them to the point where they're ready to move on. In the meantime, you bring them onto your boat, build them nice things, feed them their favourite foods, and generally hang out as you sail through the odd, fantastic purgatorial landscape in which you've found yourselves: up until they decide it's time to say goodbye. It's a heavy premise, and Spiritfarer treats it with all the respect it deserves, making it clear from the start what sort of game it is going to be, and following through on its promises in a way that feels thoughtful and well-considered.

The quests all feel, on one level, like standard fare for the genre - build something new, learn to collect a new resource, visit a new place, all while trying to help people to untangle their last requests. Despite the initial introduction, however, it quickly becomes apparent that none of the character arcs in Spiritfarer are going to tie up these individuals' lives and motivations into a tidy, complete "life well lived, lessons learned" package before sending them off. Most of your Spiritfarer passengers mean well, and the relationships they build with you (as a silent protagonist, there seems to be an element of projection in this, but it doesn't really affect the power of these moments) are heartwarming and sweet, but most are coming from lives shaped by tragedy and some are downright challenging. All of them have regrets, all of them have aspirations for their time in the Spiritfarer realm which are left largely unrealised, most request help from you that doesn't quite turn out as they hope. None of it matters: at some point, they still have to make the final journey, and that this moment isn't one of gamified triumph is one of the most important elements of the Spiritfarer experience. Death isn't the end of a tidy story arc, but a messy, incomplete process, and that's OK.

One of the most heartbreaking goodbyes is the one to Alice, a grandmotherly hedgehog who joins - bringing a pet sheep with her - and initially sets about being as helpful and demanding as all the other passengers, asking for upgrades and buildings and then requesting a special trip to the setting of one of her favourite stories. When fulfilling that request and escorting her around the a desolate, snow-covered town which she views with total, unmitigated delight from start to finish - Alice's health starts to take a turn. From that point onwards, every progression in Alice's storyline is about her mental and physical decline, and it becomes clear that no fetch quest or story progression is going to reverse the effects of dementia. It was a story that hit close to home, and Spiritfarer manages to strike a balance with it that could easily have gone badly wrong. As it is, Alice's arc is one of the most impactful and bittersweet in a game that's already packed with high quality moments, an incorporation of end-of-life care that's respectful to its characters and the concept it is trying to portray within a game that still manages to do what game narratives need to do.

Spiritfarer definitely delivers on the gaming experience too, helped by the bonds it creates with characters and the way its arcs question some of the underlying assumptions behind resource management and fetch quests. One of the things that impressed me early was the game's ability to create a sense of epic, cinematic challenge without any genuine threat to progress. Many resources are collected through challenge sequences, usually tied to one of the characters - for instance, during my first lightning storm my Uncle Atul teaches me how to capture lightning in a bottle, and proceeds to call down lightning onto the deck of the ship with his flute while I run around trying to catch the strikes. Nothing will happen to me if I don't get the lightning strike lined up - though Daffodil has a hilarious animation every time she accidentally gets in the way of one - but the atmosphere, the soundtrack, and the animation all combine to make a relatively simple platforming challenge into something exhilarating. Tying these challenges to individual characters, and then keeping them open without their presence once they leave, is also a neat way to keep the memories of these past residents in your mind as you progress through the game. For catching lightning, which became a ritual with my favourite character which I kept repeating well after I needed to - finding the minigame after Atul's departure meant confronting his loss all over again, and the game makes you feel that every time.

Because the game is so well thought out from almost every angle, the one or two missteps it contains are a little more obvious. The platforming elements are good but not outstanding, with the controls around when one hits a platform or a zipline and when one falls through sometimes feeling arbitrary. There's some very light Metroidvania elements around picking up new skills (bought with the tokens that your passengers give you as payment for their stay), but the game isn't brilliant at signposting things that are deliberately inaccessible until a new skill is gained. None of this really affected my enjoyment, and some of the late game skills are just so fun to mess around with that it's hard to be annoyed that you've missed a platform you really felt you should have landed on if it means you get to do the wild leaps that got you close again. But for players less experienced or enamoured with platforming, some of these elements may become more irritating, and it definitely feels like the weakest part of the gameplay. As is par for the course in management games, the sheer number of tasks the game requires of you also becomes daunting (In particular, please note you do not need that many sheep) and can get repetitive and boring (though the beautiful animations and Stella's constant grin kept me doing many things well beyond my usual threshhold of annoyance). At a certain point, I basically felt encouraged to let most of the management go, spending the endgame selectively picking up resources that I actually needed, letting my fields be empty, and spending large parts of my voyages sat on the balcony of my by-then ridiculously full boat, taking in the game's music and ambience, rather than feeling everything needed to be all productivity all the time.

I also encountered a couple of frustrations with more story-driven game elements. Two quests rely on getting a group of characters together at one point, then travelling somewhere to continue the quest, but the way one of these gets realised (and a possible glitch in the "asking" mechanic) meant that I was left with an entirely empty "audience" for one scene, undermining the way the character's subsequent reaction played out.There is also one very significant deviation from the core formula with the Everdoor, which works well for the character on one level, but was the only point that had me reaching for the internet to figure out if my game had glitched, because it came so suddenly and felt like a betrayal of expectations that I didn't expect from the game at that point. It turned out to have been an intended mechanic, and one which I came to terms with, but this was the only point where I felt the game didn't have my back when it came to guiding me through its emotionally driven content.

Content Note: Spiritfarer's gentleness shouldn't obscure the fact that there are some heavy themes involved here. As noted above, one character's arc is centred around old age and dementia; another involves child abuse, while others deal with negative family relationships in more general terms. Two of the most challenging characters engage in negative, controlling behaviour over Stella, although as the characters have no power over you in-game (it is, of course, the opposite), it's easier to view this in the tragic context it seems to be intended. Also, one of the characters talks about the effect that disability - specifically, becoming a wheelchair user - had on their life in entirely negative terms. The way this is raised makes it clear that their intention is to discuss how they were objectified and dismissed by the people around them as a result of their wheelchair, rather than it being the disability itself that got in the way of achieving what they wanted to. However, other players may find that this portrayal falls short of offering a sensitively realised disabled character, especially as the character is once again able-bodied in the afterlife. (Update: the portrayal of this character has indeed been raised over Twitter, specifically a second conversation, which I didn't properly catch the implications of during the game. Thunder Lotus has apologised and will hopefully be addressing this dialogue and the character's arc in an update.)

None of these got in the way of my enjoyment of Spiritfarer, and all felt sensitively handled, but in a game that's already trading in on a challenging premise, many players will benefit from a clear sense of what the game is asking from them. And, of course, despite its nuance and careful treatment of the concept, this is a game that portrays a degree of beauty and closure in choosing death: for many of us, this is a concept that needs to be approached carefully and in the right headspace, and I urge all prospective players to take that into account before picking this game up.

All in all, though, Spiritfarer is a game that I adored playing, from its beautiful art and entertaining gameplay, to its immersive and luscious set pieces, to the deep, resonant, heartbreaking arcs of all of its characters. In creating a game around end of life care, Thunder Lotus have taken on an immensely challenging brief and have realised it with impressive thoughtfulness and flair. This is a game experience that is going to say with me for an awfully long time, and I can't wait to see what this studio does next.

Bonuses: +1 every character has their own unique hug animation! +1 thoughtful character storylines that are heartbreaking in just the right way

Penalties: -1 the few awkward moments stand out all the more in what's overall a highly thoughtful package