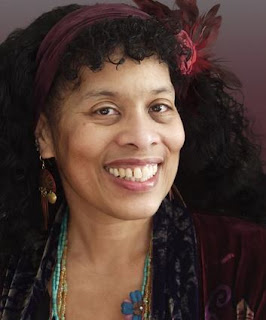 When I started seeing promotional material for Andrea Hairson's Master of Poisons,  there was a turn of phrase that caught my eye: "Poison desert eats good farmland".   Something to know about me is that I live in a college town that is surrounded by farm land. And we're pretty protective of our farm land  and fresh water sources around here.  Anything that harms the land and the water, that harms how we feed ourselves, thems fightin' words. With its sorcery, floating cities, empires on the edge of collapse, powerful storytelling and deadly storms, Master of Poisons is obviously about much more than protecting the land. But, if we don't have land to live on, land to farm to feed ourselves, then what?  Come for the "save the farmland!" basics, and stay for the fact that this book pulls together research and stories that the author has been collecting for her entire adult life.

Of her newest novel, Master of Poisons, Hairston says:

"Master of Poisons is about denial and the empire of lies we’re willing to believe. It’s about decolonizing the mind. I wanted to write myself out of the hopelessness we feel facing devastation. This is a book about the stories we tell and the communities we make to do the impossible. . . .I am an Afro-Futurist in league with Indigenous-Futurists. I want to bring the wisdom of recovered ancestors into conversation with the future."

Not one to limit her artistic endeavors to just ink on a page, Hairston is a playwright and Artistic Director of the Chrysalis Theatre in Western Massachusetts, which has produced everything from scifi comedies to musical workshops, to radio shows and more.  To learn more about Hairston's fiction, essays, and stage work, you can visit her website at andreahairston.com, and follow her on twitter at @AAHairsto.

After learning about Master of Poisons, I had about a million questions for Hairston, from her inspirations for this novel, to her worldbuilding methods, how music and language plays into her storytelling, to her work on the stage. She was able to take some time out of her schedule to answer many of them.  Let's get to the interview!

NOAF: On a Tor.com post announcing the book, you talked about how you "wanted to write myself out of hopelessness we feel facing devastation". Can you tell us more about this? Was writing Master of Poisons emotional for you, because of the feelings of hopelessness? (as someone who lives in a small city surrounded by beautiful farmland, the idea of farmland dying makes me want to cry!!)  Andrea Hairston: Some days a wave of despair inundates me. I feel like a brief speck of dust, struggling to survive the whirlwind, the hellfire. Writing is like prayer. Writing challenges me to feel the world, to find myself in relation to the dirt, the people, the rain, the bees, all living things.   That’s how and why I wrote Master of Poisons. My emotions are fuel for activism, not a drain.  We all use our emotions as fuel to create and sustain the changes we want to make, have to make. So, when writing, I don’t feel alone. I don’t feel helpless, hopeless, useless. I know that what I do matters. What we all do matters. 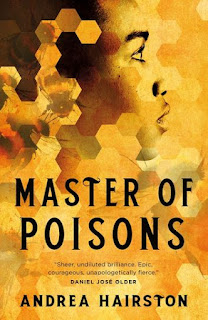 NOAF: What were some of your inspirations for the novel?   AH: The films of Guillermo Del Toro—he shows us the other worlds, beautiful and terrible, in our world. Frans De Waal’s books on animal emotion and intelligence—De Waal asks are we smart enough to know how intelligent animals are or wise enough to sense how much they feel? The plays of Pearl Cleage, Alice Childress, Anna D. Smith, and Tess Onwueme—these women recovered lost history, reinvented the present, and reached to the future. The novels of Octavia Butler, Michael Ende, Ursula LeGuin, Nalo Hopkinson, and Tad Williams. They made me feel at home in Science Fiction, and Fantasy.

NOAF: I love these kinds of epic, lush, complicated worlds, how did you create and design the Arkhysian Empire?

AH: I tried to write a novella, tried to squeeze the story and the world into 40,000 words or less and it just didn’t work! The characters demanded backstories, geographies, their own particular languages, histories, and cultures. The conjure system demanded a full cosmology. Each language had words that didn’t translate, that had to be explained by stories, myths, and experiences. Nobody ate the same food. Even the trees and rivers wanted to tell their story!

NOAF: What kind of research did you do for this novel?   AH: I’ve been researching this book since the ninth grade so that’s a very long time! I read history, cultural studies, novels, poems, plays. I love going to museums-- and looked at art, maps, sculptures, clothing, pottery, weapons, fabric, tapestries—all sorts of material culture. All praises to the Smithsonian Institute, particularly the Museum of the American Indian and the Museum of African American History and Culture.  I’ve learned several languages. Learning a new language offers a particular way of seeing the world. Truly, every language makes a different world.  Decades of doing theatre and performance was also good research. Theatre is great practice for getting inside characters and worlds that aren’t your own. I play balaphon –a West African Instrument with wooden keys and gourd resonators. The polyrhythmic West African music transports me, changes me. Like speaking a particular language, playing music offers me a portal to a new realm.  NOAF: What is your writing process like? Are you a pantster or a plotter?
AH: So I do both! It’s a polyrhythm. I plot and then fly off with my muse, and then I settle in and plot and then fly off again until I find the end and then I can get the beginning to work.  NOAF: Without too many spoilers, can you tell us if there was a particular scene that was your favorite to write? Was there a scene that was more difficult to write than you expected?  AH: I loved writing stories from the point of view of the animals, of the non-human characters in the novel. These were some of the hardest scenes to write, but also the most fun. I’m allergic to bees and becoming a swarm of them was thrilling.  NOAF: You are the Artistic Director of the Chrysalis Theatre, a cross cultural performance ensemble, and you teach theatre and playwriting. How has your experiences in live theater and playwriting informed how you write short stories and novels?   AH: Doing live theatre means you have to rehearse and rehearse yet be ready to improvise with whatever comes up during the performance. Writing for theatre, I’ve rewritten lines after the show has opened. Performers wanted to kill me, but if the lines I handed them were better than what they’d been struggling to get behind, they’d cuss and fuss and then change. So I am a champion rewriter. I revise and revise until I get the story I want.  I love dramatic storytelling—finding the action, the mystery that propels they story. As I playwright, I love finding the voice of each character, the idiom of their thoughts, the idiom of their world. I bring all that into my novels.  NOAF: How is telling a story on the stage different than telling a story on the page?  AH:On stage you have actors, sets, lights, costumes. A novelist has to conjure all that setting in the minds of the reader. No designers or performers to the rescue! No music to underscore or illuminate intentions, motivations, mood. In the theatre, the audience can breathe the same air as the performers. They can taste the actors’ hunger and joy, feel the music of the actors’ voices in their bones. Sitting in your seat, taking in the play, you sync up heartbeats with the rest of the audience and send your energy up on stage to support the performers as they reach beyond themselves. But playwrights don’t write the interior landscape of a character. Word by word, the novelist maps that often complex and always intriguing interior and invites the reader on an intimate journey from self to other. Hours can go by and lost in the book, in the setting and music that the writer has conjured, the reader forgets everything else.

NOAF: Thank you so much, Andrea, for this enlightening interview!