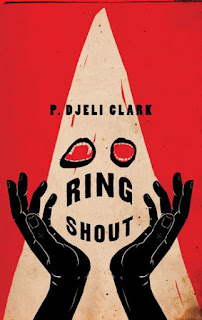 Hatred. Racism. Marches in the streets. Violence.  Standing tall and doing what you need to do.

I might be describing America right this second, while at the same time describing the America of 1922, of P. Djèlí Clark's novella Ring Shout, available Oct 24th from Tor.com Publishing.  In this dark fantasy historical novella, the film maker D.W. Griffith is a sorcerer, whose 1915 film Birth of a Nation cast a spell that forced our darkest thoughts to the surface. The Ku Klux Klan (and it grosses me out to even type those three words) gain power and have their own plans.  The hatred they feed on, it turns them into literal monsters.  And when monsters rise, so do monster hunters.  In prohibition Georgia, Maryse Boudreaux has a magic sword, a best friend whose a sharpshooter, and enough internal demons to keep anyone up at night.

Anyone can write a novella about a girl who kills monsters with a magical sword. But it takes someone of Clark's skill to write Ring Shout. He makes it personal, he puts it in your face, he doesn't pull any punches. Visceral body horror, internalized hate, America's legacy of dehumanization. How he managed to cram all of this into less than 200 pages is it's own magic trick. You can read an excerpt of Ring Shout here.

Clark is the Nebula, Locus, and Alex award winning, and Hugo, and World Fantasy nominated author of the novellas and short stories The Haunting of Tram Car 015, The Black Gods Drums, The Secret Lives of the Nine Negro Teeth of George Washington, among many other short stories and short novels. His short fiction and essays have appeared in  Apex Magazine, Beneath Ceaseless Skies, Fireside Magazine, Fantasy Magazine, Strange Horizons, Lightspeed,  and Tor.com.  He is a founding member of Fiyah Literary Magazine. His first full length novel, A Master of Djinn, was recently announced. When not writing, he works as an academic historian, studying comparative slavery and emancipation in the Atlantic World.  You can learn more about Clark and his work by visiting his website or his blog, or by following him on twitter.

Mr. Clark was kind enough to talk with me about the music behind his new novella, the novella's long (and then fast) journey to publication, how the novella got personal, and more. Let's get to the interview!

NOAF: You mention on your blog that this story was in your head for a long time before you wrote it down. Can you tell us about when and why you decided to write the story down? And while you were drafting it out, did were there any scenes or characters that ended up completely differently than how you had originally imagined them?

P. Djèlí Clark: Yeah, the story was definitely with me for a while—mostly in dreamt up scenes and characters with a smattering of a plot. Visuals or a song could send me daydreaming for a minute. As I’m prone to do, it’s only when I have a full sketch of a story in my head that I start jotting down notes. That was in early August 2016. I sat down and wrote up Ring Shout from start to ending, on the Notes feature on my iPhone. Then I put it down and went and lived the rest of my life. It wasn’t until April of 2019 that it started to become “a thing.” I was sitting in a DC café, on the phone with my editor Diana Pho about a book contract for an unrelated completed full-length novel. The book world being the book world, it probably wouldn’t come out until 2021. My novella The Haunting of Tram Car 015 had just been released and that meant there’d be this big gap before I was next published. Diana asked if I might be interested in doing another novella in between—that is, if I had any ideas. I pitched two concepts, one of which was Ring Shout. It ended up in the contract.

Then came the real trouble. I had nothing written but a set of notes from almost 3 years back and a head full of ideas. I had until about September to turn it into a working story. Planned to get it done that summer. But nope. Academic work and copyedits on the unrelated full-length novel pretty much devoured my writing time. Finally, I got started on August 30, 2019. Two days before it was due. Had to ask for an extension. Then somehow, in the next four weeks, got it written. By that time whole new characters had been added, scenes had changed, and elements of the overall plot had been rewritten—so that it only resembles in passing those original notes from 2016. But hey, that’s the writing process. 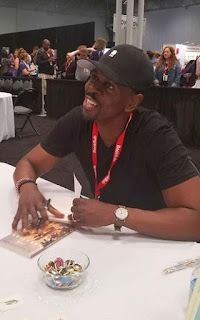 NOAF: You also mentioned that “music is integral to this story.” Were there any songs in particular, that got you into the mindset of the story? If Ring Shout had a soundtrack, what might be on it?

PDC: Well, first actual ring shouts. I listened to a lot of those: recorded versions from the early twentieth-century, modern day re-enactors, even attended a live performance. It was those more than anything that kept the story alive. On a long drive, if I was by myself, I’d just play them over and over again and imagine the world I intended to build. I think I started doing that at least since 2015. But like I said there were also visuals mingled with the music. Scenes from Beyonce’s Formation video and the whole sound of it set my synapses firing. When I actually started writing, by chance I was listening to Lupe Fiasco’s album Drogas Wave, and the first five songs on there were a big influence—particularly with Maryse’s sword. In the original draft version there were lyrics from a range of artists: Beyonce, Stevie Wonder, Gregory Isaacs, Marlena Shaw, UGK, Outkast. Then my editor informed me about copyrights, and it was all cut. But yeah, the soundtrack would definitely include stuff like that.

NOAF: You don't pull any punches. Ring Shout is about hate, the Ku Klux Klan, and hate consuming the world. There's racism, racial hatred, body horror, and people (possibly including readers) facing their own demons. How hard (or easy) was this story to write?

PDC: It took some work. Dealing with the Ku Klux Klan, that part was maybe easiest. The whole idea of monstrous Klan members came from narratives I’d read by ex-slaves in the 1930s WPA, some 20 years ago. I’d also grown up in the South long enough to hear tales of the Klan and racial violence. Taking that and melding it into a fantasy, making it the external evil to be confronted—that was cathartic. Dealing with the inner demons the protagonist faces, about hate on an internal level, that was the hardest hill to climb. That took some soul searching and self-confrontations. That got personal. NOAF: Talk to us about Maryse, Sadie, and Chef. Who are they, and what makes them such compelling characters? PDC: Maryse is our main protagonist. A sword-wielding heroine out of a fantasy novel. She’s good at fighting monsters, less so at facing her own demons. And she’s got a choice to make. Chef is the Harlem Hellfighter, returned from WW1 to end up on another battlefield, and carrying her own scars. Maryse and Chef I knew were characters before I had names for them. Sadie came later. Brash, foul-mouthed, and deadly with a rifle, she’s the added bit of chaos I thought the story needed. I think, I hope, what makes them compelling is they each have backstories/personalities that make them distinct. That can lead to friction; but as a team, as friends, when they close ranks they’re damn formidable. NOAF: More than a few reviewers have mentioned they wish the novella was longer, that they could spend more time with characters they loved, especially watching Maryse wield her sword. Were there any scenes that were cut from earlier drafts? Do you have any plans to write more of these characters, or in this world?

PDC: Be careful what you wish for! I’m a habitual over-writer. Every novella or novelette I’ve written started as a short story that got out of hand. With Ring Shout, at least I was aiming for a novella. Even so, there were lots of smaller scenes, longer interactions, character developments, dialogue, etc. that had to be cut, all to keep it under the magic 40k. The final draft I got in was something like 39,980 words. Every copyedit I’ve done since, has been me trying to get things I’d cut snuck back in by trimming prose here and there and not going over 19 more words. Pretty sure I’ve made my editors nervous! Plans to write more in this world? Don’t know yet. But I like to leave the door open.

NOAF: Who were some of your favorite writers and artists, when you were growing up? What about their work made you decide to become a writer? PDC: Well in SFF, Madeleine L’Engle was a definite influence when I was younger—and there’s an ode to her, of sorts, in Ring Shout. But I didn’t decide to “become a writer” until later in life. Well into my late 20s. Before that, it just wasn’t a path I saw for someone like myself, with my particular identity and background. It was coming across writers like Octavia Butler or Tananarive Due that compelled me to think maybe I could do this—maybe I had a voice to add to genre. NOAF: What are you working on now? Any new or current projects that you can tell us about?

PDC: A secondary world fantasy novella—about an assassin who is given a seemingly impossible, perhaps existential, assignment. Also, she’s quite undead.

NOAF: Thank you so much! Ring Shout looks incredible and you've also got me all intrigued about this undead assassin.