Microreview: In the Black by Patrick Tomlinson 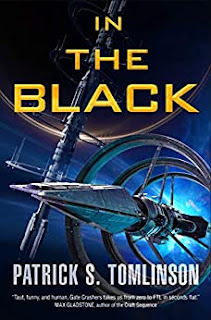 Captain Susan Kamala  of the Ansari has a problem. Sure, she’s the captain of a class name ship in the CCDF, and she’s worked hard to get that position. But now a second defensive recon drone has “failed” in the 82 G Eridani solar system they are patrolling, and it does look like the Xre aliens are up to something. The seventy year old cold war between the two species may yet turn hot once again, with Captain Kamala on the grill.

Thuk has a problem. Sure, Thuk is the Derstu, the chosen leader of the Xre warship Chusexx, new and fresh, and it is probably a ship better than anything the humans have. But being Derstu is not quite like being a Captain, and Thuk has to see to the crew, as well as the orders from above. Poking at the humans, testing their defenses is a tricky thing to navigate. It's enough to want one to molt their shell. And so when the poking at the human defenses provokes a confrontation, that shiny new ship might get its real shakedown in a shooting match with a human warship.

Tyson Abington has a problem, too. Sure, he’s the CEO of Ageless, Inc. Sure, he has a kickass AI, Paris, which helps him keep on top of running one of the corporations that dominate Human Space. But his company’s colony over on a planet around Teegarden’s Star has a very nasty virus, and news of that when it gets out to the public is sure to hit stock shares. And there are intimations and rumors of other things, other threats to Ageless  in the offing. The corporate sharks are circling, and Tyson is getting the sense that these are moves for high stakes--stakes enough to threaten not just him, not just his position, but worse, his entire corporation.

Their three stories may start, or stop, or even hasten interstellar war in Patrick Tomlinson’s In The Black.

The beginning of the novel, the dedication of the novel, is to David Weber, Walter John Williams, Marko Kloos, and James S. A. Corey. The novel stakes out right away that this is squarely pitched at readers of, and playing in the Military SF Space Opera quadrant of the galaxy of SF. The novel is traditional enough and so well within the boundaries of that subgenre that if Mil-SF doesn’t interest you, this is, full stop, not going to be the novel that is going to give you the most in your reading bang for the buck. This is the novel where Tomlinson decides to see what he can do with a storied portion of SF, but it is not transcendent of that subgenre.

So what do we have here?


The social worldbuilding and the setup intrigued me. The corporate dominated Earth and how the Corporations have taken us to the Stars and run planets and fleets feels somewhat like a variation on the Corporate future of Martha Wells’ Murderbot series, but with the dials turned much more heavily to a militarized and military focused presence in space. I somehow get the sense that the Xre-Human war started off much like the Kzinti and Humans in Niven’s Known Space--the Xre thinking the humans were going to be easy prey and the Humans, caught on the backfoot, nevertheless got to parity and a cold war.. The Xre are much more crafty than the “Attack before they are ready” Kzinti. Tomlinson’s characterization of aliens, as seen in his previous novels, often shows far more nuance and craft than some of the stereotypes seen in Niven’s Known Space. Frankly, I would rather face a Kzinti force than a Xre force any day if I were given the choice between the two. Tomlinson avoids the twin pitfalls of “starfish aliens” that are incomprehensible and “rubber forehead aliens” who really are just humans with a dye job. The Xre are winningly described and characterized and by the back portion of the novel, their actions are comprehensible.

That leads us to the characters that Tomlinson populates his world with. There are archetypes, standard models of characters, basic variants that one finds in a lot of Military SF, Space Opera or not. Tomlinson subverts this from the get go with Captain Kamala and the crew of the Ansari. Kamala is no Smurfette on the ship--the ship, and indeed most of the fleet is crewed by women, because women handle the rigors of space better. It’s a poke in the eye of mediocre Mil SF which has Manly Men doing Manly things in Space, backed up with a logical reason as to why the crew of this ship, and most ships in fact, is mostly women. Tomlinson’s captain and crew are professional soldiers, with quirks, and full fledged personalities. This extends to the Xre, and to Tyson and the characters around him as well. This is not a novel of deep character arcs and development. However, Tomlinson gives a good dynamic range and inner life  to his characters, human, alien and also the AI Paris. Like his previous novels, Tomlinson understands character, especially the absurdity of characters’ lives, and that is a real joy to his writing. And there are other fine notes of dry humor, another staple of Tomlinson's writing that leavens the proceedings. I was expecting the Packers humor, but not the poke at a sit down restaurant chain, just to name two bits.

But it is the nuts and bolts of the Military SF that the novel really focuses on, and where for the most part it shines brilliantly. The FTL is the Alcubierre drive, frame dragging FTL with interesting limitations and restrictions. There is no Ansible (which means that the transmission of information between solar systems has to be by ship, which proves to be something that parts of the plot turns on) There is a definite sense of a cold war arms building up and testing on both sides. Like the 1970’s and 1980s as America and the USSR developed better weapon systems of various kinds, a Balance of Terror, there is a corporate cast to the weapons development, making profit motives an interesting tweak to how the Military tech development and execution proceed. There is plenty of space action as the opposite sides square off, and Tomlinson delivers what Mil-SF readers are looking for in terms of well described action and adventure. At the same time, there is an not so explicit criticism of the corporate military industrial complex (complexes if you count the Xre too) and a real sense of the potential costs of war and who war ultimately benefits.

My major beef with an otherwise high quality novel is the ending. The novel builds up, introduces mysteries, conflicts and sequences, and comes to a conclusion that really isn’t one. There is a final Mil-SF battle and set piece confrontation that is really spectacular, but there is a frustrating lack of finality to this novel, providing no off-ramp for readers who don’t want to read a second novel (or, worse, if a second novel should never happen). I was hoping for something more self contained along the lines of, say, Gate Crashers. I do like the world, the tech, the action and the characters and I would read a sequel, but I was hoping for something a little more self contained. Hopefully there will be more books in the series, so as the cliffhangery bits of this novel won't itch quite so much.

Bonuses: +1 for an excellent cast of characters
+1 for excellent Military SF action beats right down the center of the pitch.

Penalties -1 for not sticking the ending.