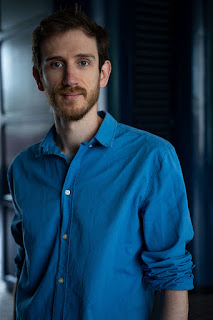 Nicholas Bowling is an author, stand-up comic, musician and Latin teacher from South London. He graduated from Oxford University in 2007 with a BA in Classics and English, and again in 2010 with a Masters in Greek and Latin Language and Literature, before moving to his first teaching job at Trinity School, Croydon.

Carter Beats The Devil by Glen David Gold. It’s a fictional biography of the stage magician Charles Carter that weaves his story in amongst the real vaudeville characters of the early 20th century. Houdini & co. It’s unbelievably fun. Somehow it manages to be a hilarious, page-turning romp whilst also feeling quiet and reflective and humane. It also gets quite dreamlike and surreal in places, but it’s done so seamlessly you don’t really question it. Like a magic trick! Right? I just thought of that. I’m particularly enjoying it because I’ve recently aborted my SECOND attempt at reading Dune. At the risk of alienating your entire readership, I just can’t get along with it. Is it just me, or is it (and the pun is absolutely intended here) just very dry?

I don’t really have my finger on the pulse of what books are coming out when, and I seem to spend my life doggedly trying to catch up on the billion-or-so books that have already passed me by. I’m forever excited about the third Kingkiller book from Pat Rothfuss. I write and read children’s books, too, and I’m looking forward to Lucy Strange’s Ghost of Gosswater. Isn’t Katherine Rundell writing a book for grown-ups? I read that somewhere, and it set me all aquiver. The book I’m really itching to read is Charles Portis’ Gringos, but that came out about 30 years ago. I can’t begin to explain how much I love Charles Portis. Gringos is the only one of his I haven’t read, and it’s out of print, so tracking down a copy has become, appropriately, the kind of frustrating, futile quest that you’d expect to find in a Charles Portis novel.

More reasons for people to think I’m a complete jerk – I really want to re-read Infinite Jest. I know it’s unfashionable, and I know it’s become (undeservedly, I think) a touchstone for pretention and hipsterdom and clever-white-male-ness, but I got completely obsessed with it. It’s one of maybe three books I’ve ever read that has completely and permanently re-wired my brain. So funny and so sad. So good at articulating consciousness and self-consciousness. It really stayed with me, and I know I barely scratched its surface on the first read-through. I also want to have another go at Station Eleven, but I’m slightly afraid to – my memory of it is like some intoxicating fever-dream, and I’m afraid that will all evaporate if I read it again.

I started re-reading His Dark Materials recently and for some reason found the voice and the style really off-putting. That made me quite depressed. I devoured it when I was younger, and now I feel like I’ve got this grown-up critical eye that’s way too “thinky” and has effectively closed off the story to me. (Which I suppose is also quite appropriate, given the themes of the book.)


5. What's one book, which you read as a child or young adult, that has had a lasting influence on your writing?

Kurt Vonnegut’s Breakfast of Champions showed me how you can be silly and serious at exactly the same time. That you can write movingly and insightfully about depression on one page, and then do a doodle of a bumhole on the next (if you’ve not read it, that is a genuine thing in the book). The stuff I write for grown-ups almost always has this tragicomic, absurd vein in it. And Vonnegut loved sci-fi, too. I like how fast and loose he plays with genre.

It’s called Alpha Omega. It’s about a school in the near-ish future where the kids start getting horribly ill, due to various entanglements with virtual reality, Big Pharma, a cursed Druid burial site, and a man with no face who definitely isn’t Mark Zuckerberg. Or perhaps due to none of that. It’s scary and sad and funny (I think?), and hopefully captures some of the absurdity of the world as it is at the moment. It wasn’t meant to be a cheesey “Covid tie-in” novel, but if you’re already nostalgic for the days of enforced quarantine, then this is the book for you.