There’s a lot to love 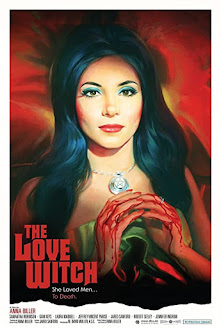 The Love Witch is a movie shot in 2016 that looks like it was shot in 1972. Supposedly, it was *the last* film shot on 35mm film and edited on a negative without using a digital intermediate. As a big film nerd, this all makes me way happy, but what writer and director Anna Biller did with this film far outpaces a simple stylistic exercise.

The eponymous love witch is Elaine, who is attempting to recover after the end of a marriage, and has — as she puts it — been reborn as a witch practicing love magick. But her magic is maybe a little too effective, as the dudes she sets her sights on never really seem to be able to move on from her. This failure to move on takes several forms throughout the movie, and Elaine seems both a little confused by this effect, but also ambivalent. It’s not really her concern if a romantic plaything can’t move on.

This is where gender dynamics come into play. I’m not the best reviewer to discuss this, but let me say that the gender dynamics in the film are complex and nuanced. Elaine articulates the notion that women should be subservient to men, and give them sex all, all, all the time. She tries to convince other female characters in the film of this. But Elaine doesn't really practice what she preaches. Instead, she seeks out men for *her own* sexual and relational gratification. We hear the abusive voices of her father and her ex-/late husband demanding greater physical perfection from her, and we watch her sexually engage with men only to come away still wanting, while the men collapse in weepy heaps in her wake.

For me, this is where the aesthetic beauty of the film comes into play. And please understand, this is a BEAUTIFUL movie. Anna Biller not only wrote and directed it, but also designed the sets and costumes. She and cinematographer M. David Mullen purportedly worked out blocking and lighting schemes from 1970s giallo movies in order to better mimic the look of those films. It’s one thing to mimic the look of old film with a plug-in, or even to shoot on the same medium, but to fully mimic it down to the nuts and bolts...well, something else happens there.

By perfectly copying the aesthetic of a bygone generation of films and doing so in the context of a new work that handles gender, narrative, and thematic content differently, Biller is setting her film up explicitly in dialogue with those earlier films. Giallo and independent Technicolor horror movies brought us a number of female heroines, but when fifty years later it’s plausible that a woman might yet be attacked in a bar because someone calls her “witch,” the narrative takes on an additional layer of meaning.

That is maybe too esoteric. At brass tacks, we have the following: Samantha Robinson as Elaine is probably as beautiful as any human has ever been in a movie; the production design is sumptuous and layered; there are evocative references to films like The Seventh Seal that make my film-nerd heart happy; and the narrative leaves room for ambivalence and competing interpretations of Elaine, her goals, and her accomplishments.

In the end, this is kind of everything you want from an independent film — a strong narrative voice, bold visual choices, and a thoughtful re-examination of genre conventions.

Bonuses: +1 for Samantha Robinson’s highly stylized performance; +1 for literally every single thing in front of the camera lens, because nothing is wasted

Penalties: -1 for a certain lack of narrative integrity that makes a couple of plot developments feel pretty mushy

POSTED BY: Vance K — Emmy Award-winning producer and director, cult film reviewer and co-editor of nerds of a feather, flock together for lo these many years now.
Posted by vkotrla at 12:00:00 AM