A fun book, but anticlimactic in its collapsage 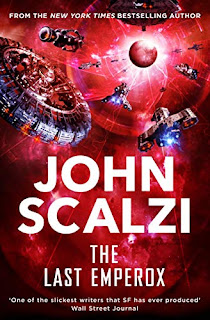 (Note: While writing this review, I found it trickier than usual not to go into spoiler territory, and there's a fairly significant discussion of the trilogy ending ahead. I'll try and keep it as oblique as possible but spoiler sensitive readers will want to read the book first (spoiler free review: it's... fine.))

It is a well-accepted fact that some authors don't work for some readers. Even within our favouritest of favourite genres, there are books that just pass us by by people whose style, or storytelling focus never clicks. I am now ready to accept that John Scalzi is one of those authors for me but, here with yet another Scalzi book I yet again have no strong feelings about, I can't help coming out of the Interdependency - a series about entertaining people coming together against political intrigue and space battles to save the day, it should be perfect - feeling particularly frustrated that it has evoked no strong feelings of interest or engagement.

The Last Emperox picks up where the last book in the trilogy left off - with an interstellar empire whose means of faster-than-light travel, a mystical phenomenon known as the "Flow", is closer than ever to collapse. Given that this interstellar empire literally calls itself "The Interdependency" and is almost entirely scattered across planets and habitats which aren't capable of independently supporting human life, this is a catastrophic event, and it's being made even more challenging by the squabbling elites who are more interested in making a profit off the collapse than in actually trying to save the people. In his review back in April, Joe notes that this backdrop is pretty on the nose for the compounding crises we're living in, and while there's certainly plenty to differentiate The Last Emperox from "our current political climate... in space!" (the hereditary monarchy being one of them) the device of having overwhelming problems which the characters have to find energy not just to survive but to push back against definitely feels... timely.

Enter Emperor Grayland II - also known as Cardenia Wu-Patrick - the young, unexpectedly competent and radical new leader of the Interdependency, who has spent the last two books dodging assassination attempts and trying to convince people that, yes, the Empire is in fact collapsing, with the help of her scientist-buddy-turned-boyfriend Marce and sweary ally Kiva Lagos. She also has the uploaded memories of all past Emperoxes (Emporex?) and the ancient king-in-a-spaceship-body they picked up in their last adventure. On the other side, we've got Nadashe Nohamapeton, fresh off her second failed assassination attempt and now engaged in a last-ditch coup attempt against the Wu family as a whole. At this point in the crisis, the political elite of the Interdependency have accepted that their world is changing, and the main decision they have to make is whether to act in the collective interest to save as many humans as possible (Cardenia's strategy) or to collect as much profit and political power for themselves as they can before leaving for the one safe, habitable planet that will remain after the Flow collapses. Aside from Cardenia and the Lagoses, almost everyone we meet among the political class is going for the latter option, and Cardenia lacks the political leverage to get them to act in a way that will save billions of lives. Plus, trying to deal with all that is hard when you're just trying to keep yourself from getting assassinated on the day-to-day, and also maybe squeeze in some quality time with your smart scientist boyfriend once in a while.

The Last Emperox is a lot of fun. It has characters who are enjoyable to be around, and a style which really brings the best out of them. Marce and Cardenia have a lot of opportunities to be sweet together, and Kiva's sections are deeply entertaining, showcasing the sweary captain-turned-political-leader's unique brand of cunning and resourcefulness. As a main antagonist, Nohamapetan could be less two dimensional, but the different ways in which she and Kiva respond to the same unpleasant living situation makes for an entertaining sequence. The bulk of the book (and these are not chonking volumes) is made up of their smartass dialogue and equally smartass inner voices as they banter, snark and swear their way through encounters with each other - and this is stuff that Scalzi is very, very good at. Full snark marks. It is possible that you will spend so much time enjoying this snark that you'll not be too bothered when you get to the end of the book and go "wait, weren't we going to see the Empire collapse?"

But for me, for all its fun and wit, I struggle to accept the fact that the Interdependency fails to deliver on the goalposts it actually sets up. Instead of being a plot about saving humanity, it becomes a plot about accumulating the power to do so. Probably. Hopefully. We think so, but we don't know. People have done shitty things with power before, but the distribution we end up here seems... OK. On one level, this plot brings in some nice pieces of history and background that have been set up across the trilogy, but it's also done in a curiously apolitical way, relying more on a deus ex machina technological device than an actual political triumph. Does it hit emotional beats? Sure. Does it complete an arc? Well, it gels with Cardenia's overall goals and arguably Kiva didn't really have an arc so much as a general drive to survive colourfully and entertainingly. For Marce, and for the entire concept of The Flow and what it meant for human society (you know, that whole "Interdependency" thing) the closure provided in The Last Emperox doesn't really answer many questions, just handwaves them off by tying up the political plot, and then draws the curtain just when success might happen. Plus, as a political triumph, it entirely relies on our read of the specific character it relates to: and yes, it works, because we are invested in the character, but it's not a particularly interesting answer to the question of cooperative action (you know, that whole "interdependency" thing rearing its head again). To be fair, the series where it does means that it escapes having to grapple with more potentially grim scenes that might throw off the tone of the series - this is no Expanse, the mistakes have bodycounts but not on the scale that it could be - but it feels like a "well, OK" sort of ending compared to the scale of the premise.

And that's ultimately how I feel about the entire Interdependency trilogy. It's enjoyable, its fun, it's diverting, with an author at Scalzi's level I've no doubt it does exactly what he intends it to do. There's always room for more popcorn-y sci fi adventures from authors who are thoughtful about what our spacefaring future might look like. If I were picking this up on a best Hugo ballot, I'd be just fine with reading it (see also: it's short) - but I'd also be quite annoyed at whatever it is in here is passing me by. Overall, though, while this might be your sort of space opera, I have to leave it with a shrug and an acceptance that this was probably never going to work out.

Penalties: -2 Unsatisfying closure, doesn't pay off on the promise of its premise