This is is science fiction shining a light on the world around us. The heart of these stories is in the lives lived through the adversity of a failing society. 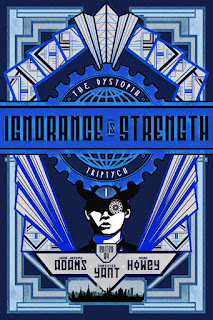 Six years ago John Joseph Adams and Hugh Howey edited the ambitious Apocalypse Triptych, three anthologies taking readers into stories set before, during, and after the apocalypse in their relative anthologies. It was a spectacular reading experience. Now, with Christine Yant this triptych of editors has an intensely (and sometimes uncomfortably) timely set of anthologies following the same model, focused on the idea of dystopia.

Ignorance is Strength is the first volume of the Dystopia Triptych, borrows its name from George Orwell, and is damned uncomfortable reading. This isn't prescient science fiction, this is is science fiction shining a light on the world around us. It feels particularly American, but the United States is in the midst of a dystopian fall and the best of these stories come across as oh too real. This isn't an anthology of despair, however.  These heart of these stories is in the lives lived through the adversity of a failing society - though everything fails in a different way.

One especially poignant story is "The Truth About the Boy", by Adam Troy-Castro - which has powerful echoes of the response to the elementary school shooting at Newton, Connecticut and the vile denials by some that the shooting even happened and the claims that those children were actors. Adam Troy-Castro takes that idea farther with active campaigns and harassment against the parents of such murdered children, though perhaps he also reflects reality.

Many of those same themes are worked with in Merc Fenn Wolfmoor's anthology closing story "Trust in the Law, For the Law Trusts in You" - which is similar only to a point. Wolfmoor's story takes the (likely) idea that the United States will do nothing to actually curb school shootings or to address gun violence in any meaningful manner but instead will introduce virtual reality to school because maybe there can't be a school shooting if there is no in person school. That's a nightmare idea on the surface, but Wolfmoor extends that idea further and it's a chilling tale, though at least for me Troy-Castro's story is the more effective one.

My initial focus on the two school shooting related stories and the different descents that brings to America is not reflective of the rest of the anthology, at least in terms of story content. Seanan McGuire's "Opt-In" tackles the social economics of human organ harvesting and the effects of poverty on the desperation to earn enough money to take care of one's family when there are functionally no legal options. There's a slight distinction, but I'm a little surprised this isn't a Mira Grant story but then it doesn't veer into the horror that Seanan McGuire does when writing as Mira Grant. As with the best of McGuire's stories, "Opt-In" is a punch in the gut.

Other stories work with the prison economy, employment, artificial intelligence, the future of learning, climate change, and all the ways we can fuck up our world and our society and just make things worse. Not every story works perfectly and I fully recognize stories that don't work as well for me (Violet Allen's "Mister Dawn, How Can You Be So Cruel?", for example) might well be the favorites of other readers. The best stories for me are the ones that punch me right in the heart, so Adam Troy-Castro and Seanan McGuire earn those honors as well as stories by Tobias Buckell, Darcie Little Badger, and Karin Lowachee. When Ignorance is Strength is humming, there is nothing better.

Since this is a triptych of anthologies with linked stories, I'm afraid of where some of these stories will go in Burn the Ashes and deeper into the heart of the despair of dystopia. The best of the stories here are so searing that taking the next step is a frightening proposition. I can't wait.

Baseline Score: 8/10
Bonuses: +1 I'm a sucker for dystopian stories. +1 That Adam Troy-Castro story was soooo good (and uncomfortable)
Penalties: -1 There are always stories which don't land. -1 One story only tenuously fit the theme (it fit, but aliens)

Nerd Coefficient: 8/10 - well worth your time and attention