Author Jim C. Hines sold his first short story in the late 90s, and he's been going strong ever since. He cut his teeth on more anthologies than I can count, along with having short stories published in Fantasy Magazine, Clarkesworld, Andromeda Spaceways Inflight Magazine, Oceans of the Mind, Podcastle, and elsewhere.  His first full length novel, Goblin Quest, was published in 2006, and Hines took over a large chunk of the humorous and heartwarming fantasy from there as the writer of the Jig the Goblin series, the Princesses series, the Magic Ex Libris series, and his current Janitors of the Post-Apocalypse series. All this while editing anthologies, speaking at events, and writing short fiction.

His fiction will make you laugh, it will make you think, and some of it will make you cry.  In 2012, Hines won the Hugo award for best fan writer, for his blog work that (among other things) interrogated how women have been portrayed in cover art.    I've been lucky enough to meet Hines in real life, and he is kind, brilliant, humble, observant, and always knows the right thing to say.  (Jim, are you secretly Doctor Who?)

Hines' newest novel, Tamora Carter: Goblin Queen (Available Sept 15) is a middle grade book that starts with roller derby, and then the goblins show up. The novel promises to be an enjoyable read for anyone who is young at heart.  Always the kind of guy who wants to try something new (because why not?), Hines did a Kickstarter to fund the book, and fully funded in less than 24 hours.   You can read the first chapter of Tamora Carter: Goblin Queen here.

You can learn more about Hines' work at his website JimCHines.com , or by following him on twitter, @jimchines.

Hines was kind enough to chat with me about his new novel, the adventure that is Kickstart, writing Smoosh the Cat, and the pure joy that is writing goblins. Let's get to the interview!

NOAF: What was the inspiration behind Tamora Carter: Goblin Queen? What can you tell us about this story?

Jim C. Hines: Tamora Carter: Goblin Queen is an anti-portal fantasy. In your traditional portal fantasy, your heroes go through a door (or wardrobe, or rabbit hole, or mirror, or whatever) into a magical world and have Adventures. Tamora is a girl whose best friend disappeared into that other world, and she got left behind. But then things start leaking back through into our world, starting with a pair of goblins who show up at the skating rink when Tamora gets out from roller derby  practice.

Basically, I wanted to mess around with the idea of the portal fantasy. Maybe humans aren’t always the heroes rushing in to save other worlds…

And I really wanted to write about goblins again. They’re just so much fun.

JCH: I don’t know that I have a favorite for this book. Gulk the goblin was a lot of fun, because he’s an unapologetic coward, but he’s also inspired by Tamora, and he loves parts of our world – like Pop Tarts. Tamora’s various pets were great too. They all have such fun personalities. Smoosh the cat is just gross (and based on a cat I had growing up). Her sheepdog Appa just wants to play with everyone, and doesn’t understand why the goblins keep running away. . .

JCH: Every book I’ve written has both. There are scenes that make you want to rip out any hair you might have left, but then there are the ones that feel so right, where everything comes together and you’re just sitting there grinning as you think about it. Those moments make all of the frustration worth it. One of the fun ones was the first time Appa gets to “play” with the goblins. It wasn’t a particularly Earth-shattering scene, but it felt like such a perfect embodiment of the tone I wanted, the sense of fun and chaos, and Tamora’s cleverness when it comes to dealing with potential dangers. 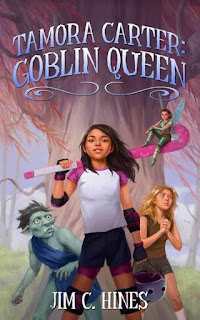 NOAF: Why did you choose to use Kickstarter to raise the funds to print and publish the book? I imagine that self publishing on Amazon would be a lot less stress than running a Kickstarter. (but also, less fun?)

JCH: Partly, I wanted to try Kickstarter because I’d never done it before. I’ve been very fortunate in my writing career so far, but I really want to try to branch out a bit more. To “diversify my income streams,” or something jargon like that. Writing is how I make the bulk of my living, and I want to make sure I can keep doing it. That means trying new things.

I also wanted to be able to cover up-front expenses, the biggest of which was hiring a good cover artist.

NOAF: I think it's fair to say that your Kickstarter to fund Tamora Carter was wildly successful, as you hit your goal within 24 hours, and ultimately raised more than four times the dollar amount you'd set as your goal. Were you surprised at how quickly the goal was reached? What were some things that helped your Kickstarter be so successful?

JCH: I was both surprised and thrilled at the response. With this being my first Kickstarter, I had no idea what to expect. Especially since I was launching it in the early months of a pandemic.

I tried to keep my initial goal reasonable, in part to make sure we reached it. Kickstarter is all-or-nothing, so if you don’t reach your goal, the project essentially fails.

I think what helped the most was that I’m established enough as an author to have fans who both trust me and enjoy my work. The vast majority of supporters were people who have read my stuff and were excited about seeing something new. Plus, you know, goblins and roller derby make everything better, so that helped.

NOAF: Doing a Kickstarter takes buckets of time, and a metric boatload of mental energy. Would you do it again? And if yes, is there anything you'd do differently?

JCH: You’re not kidding! It’s basically all of the work that goes into self-publishing, plus a month of fundraising, followed by all of the reward fulfillment. I’m still working on getting books printed so I can mail them out to supporters. COVID-19 and other assorted 2020 chaos has caused some serious delays at the printer, which is frustrating.

Would I do it again? Probably, if I had the right project. One nice thing about the Kickstarter was that we raised enough up-front money for me to hire a very skilled artist (Leanna Crossan) to do the cover, and then we reached the stretch goal where I could commission her to do three interior illustrations as well.

I was advised to look into fulfillment services that help out by organizing and mailing out the rewards for you (for a percentage, of course). I'm not sure whether or not I'd try that next time. I'm a bit of a control freak, and I like being able to sign and personalize everything myself. But ask me again how I feel after I've mailed out 300+ personalized books . . .

NOAF: I've been following your work for some time now, and I know you're always working on something, always playing around with story and character ideas. Do you have any current projects you can tell us about?

JCH: I just turned in Terminal Peace, which is the third book in the Janitors of the Post Apocalypse trilogy. So my next project is to catch up on sleep and everything else I've put off while I was working on that final rewrite.

Writing-wise, I'm not sure yet. My agent has been shopping around another middle-grade book, so I'm waiting to see what comes of that. Whatever I do next, I’m leaning toward making it a standalone. Probably fantasy. But we'll see what happens.

NOAF: Thanks so much Jim!