The Birdverse's first standalone novella is a gentle, thoughtful treat 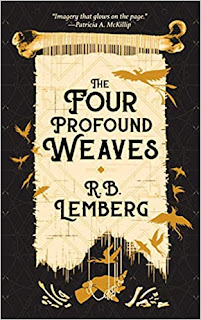 I am a big fan of everything I've read from R.B. Lemberg's Birdverse series, particularly their Nebula-nominated story "Grandmother nai-Leylit's Cloth of Winds". So naturally, on learning that there was going to be a new standalone novella continuing that series, I was already sold, particularly as it focuses on the living grandparent of that story. The Four Profound Weaves stands well alone, but "Grandmother nai-Leylit's Cloth of Winds" is a story that's very much worth reading. If you want to experience that story fresh, I'd suggest going to check it out before proceeding with this review, as the following will contain mild spoilers.
The Four Profound Weaves opens in the Snake-Surun' encampment, almost directly after the events of "Cloth of Winds". Having been physically changed into a masculine body that reflects his gender identity, Aviya's grandfather has fulfilled one long-held wish, but things are still far from easy. His people, the Khana, have a strict social segregation and separation of roles between the genders, and while he had been playing the role of a "rebel woman", engaging in work like the creation of artefacts which was supposed to be restricted to men, our protagonist has little frame of reference for being a Khana man. He fears that a return to his people would be impossible in his current form, and has missed even the cultural events which would enable him to take on a true new name. Surrounded by a culture whose social acceptance of "changer" (trans) identities leaves little room for empathy as to why nen sasaïr (the interim identifier he chooses to go by) can't just embrace his transition and "go sit with the men", his search brings him back into the orbit of Uiziya, a Surun' woman he met during his journey forty years ago and who has been contemplating challenges of her own. Uiziya's aunt is Benesret: once a great weaver of the Surun', now an ancient exile who has spent decades weaving magical cloaks for the Birdverse's assassin cult, trying to master the ability to weave from bones. Uiziya and nen sasaïr both seek out Benesret for their own reasons, and are both left disappointed but with a joint mission: to retrieve another lost magic weave, this one crafted from song, from the fascist ruler of the city where nen sasaïr grew up.
At the centre of The Four Profound Weaves are, unsurprisingly, four profound weaves: magical artefacts created from fantastic substances, with divine resonance and enormous skill required to master them. The more common magic in use is that of "deepnames", gained and used by characters in specific configurations for various effects. The deepname magic system feels at once inscrutably mysterious and straightforwardly practical, and characters have different strengths and abilities depending on their configuration in a way that supports their characterisation and struggles. In nen sasaïr's culture, deepnames are also gendered, and his configuration is one which prioritises power and therefore reads "feminine" in a society where men are kept protected to maintain connection to sacred song. While we only meet the Surun', the Khana, and the Iyar - the culture which runs the city in which the Khana live as a minority - the care put into developing each culture makes them feel like part of a much larger, more diverse whole.
Once nen sasaïr and Uiziya get underway, the plot of The Four Profound Weaves is relatively simple: the two attempt a deal with Benesret, return to Iyar, and (despite complications) figure out how to overcome the Collector's plotting and leave with what they need. What makes the story so good are the different but interlinked emotional journeys each goes on along the way. For Uiziya, whose meeting with her aunt turns into another betrayal, there is a need to move on from her past and re-establish her faith in her own abilities, while also untangling more of the Collector's motivations. Uiziya is drawn into his attempts to get his hands on a weave of bone, and the awful lengths to which he has gone to assemble the materials for one; the balancing of the loss and death she witnesses with the pull to deepen her craft is compassionately and compellingly told.
Nen sasaïr's journey is even more interesting, particularly as this may be the first book I've read which deals with a man exploring freedoms and desires as they relate to his gender identity, and forging a path that remains true to both. Like Uiziya, his journey involves questioning events from his own past, particularly his own spouse Bashri nai-Leylit, who he loved but who constantly entreated him to keep his identity secret and limit his queerness to the "rebelliousness" acceptable on the margins of Khana society. Nen sasaïr's return to the Khana quarter of Iyar is heartbreaking, but less straightforwardly so than he expects - because, of course, nen sasaïr is not the only trans man the Khana have ever seen, even if their society doesn't accommodate "changers". As his relationship with Uiziya, and unfinished business of his own with the Collector, links the pair's conclusions together, The Four Profound Weaves sets up a satisfying end that doesn't provide all the answers or right all past wrongs, but offers a convincing way forward for both of them which stays true to the queer narrative.

If you've not experienced Lemberg's prose before, you're in for a treat with this, as the style brings the meditative story of nen sasaïr and Uiziya to life in a way that's readable and yet really makes the most of the rich fable-like qualities of the story being told. I can wholeheartedly recommend this novella and this series as one that's well worth spending time in, packing fascinating, complex worldbuilding and a thoughtful engagement with queer identities into a deceptively short package. I look forward to further adventures in the Birdverse soon!

The Math
Baseline Score: 8/10
Bonuses: +1 A thoughtful combination of worldbuilding and narrative that makes room for exploring queer identities
Penalties: None - The Four Profound Weaves does what it sets out to do in a way that I can't fault on any axis.

Nerd Coefficient: 9/10
POSTED BY: Adri, Nerds of a Feather co-editor, is a semi-aquatic migratory mammal most often found in the UK. She has many opinions about SFF books, and is also partial to gaming, baking, interacting with dogs, and Asian-style karaoke. Find her on Twitter at @adrijjy.
Reference: Lemberg, R.B. The Four Profound Weaves [Tachyon Publications, 2020]
Posted by Adri Joy at 12:00:00 AM