How to End a Game of Thrones

The year was 2006. My fiction reading list was maybe 60% science fiction but 0% fantasy. It had been this way for years, after my love for second world fantasy died on a hill called The Wheel of Time. Subsequently, I had internalized normative cultural discourses that devalue fantasy unless packaged as “magic realism.” Former NOAF contributor Jemmy, however, had other ideas.

At that time we were working for the same company, our offices strategically located in a neighborhood famous for its second-hand bookstores. We would often visit them during our lunch hour; without fail, Jemmy would pester me about this fantasy series that he claimed “changed everything.” But I was resistant, that is, until he bought me a copy of George R. R. Martin’s A Game of Thrones and I relented.

So I read the first chapter, and then the next, and then the next. Within a few days I had devoured A Game of Thrones in its entirety, proceeding to devour its sequels, A Clash of Kings and A Storm of Swords. I couldn’t get enough, so I moved on to other series; I was most definitely back on the fantasy train.

I have issues with those 3 books, some quite serious, but for my money the worldbuilding, character development and punctuated narrative moments are as good as any in the genre. Furthermore, despite their heft, these books feel meticulously planned, tightly plotted and rich with narrative detail. Most importantly, they revived my interest in fantasy and led me to discover a range of authors I otherwise might not have read: Andrzej Sapkowski, Gene Wolfe, Elizabeth Bear, N.K. Jemisin, Steven Erikson, Kate Elliot, Django Wexler and many others.

I like to think of those first three books as a complete trilogy with an ambiguous ending. It’s a coping mechanism that helps me deal with the fact that the next two books - A Feast for Crows and A Dance with Dragons - are such disappointments; a single, bloated novel in two 1,000-page installments; a failed attempt to “get to Mordor” that aptly demonstrates the importance of a good editor in no uncertain terms. And it helps me deal with the fact that Martin may never finish the series.

When Game of Thrones launched in 2011, I was excited. Early indications suggested HBO would go all out adapting the series. Like many fans of the book series, I hoped this it would serve as a catalyst for Martin to finish the series. Instead, it has finished the story for him. But more about that in a bit.

The initial season was a masterful adaptation of the first novel, which is far tighter in both narrative and geographic scope than its sequels. Many of the actors looked and felt exactly like their written counterparts; some – like Jorah Mormont and Tyrion Lannister – were an improvement. 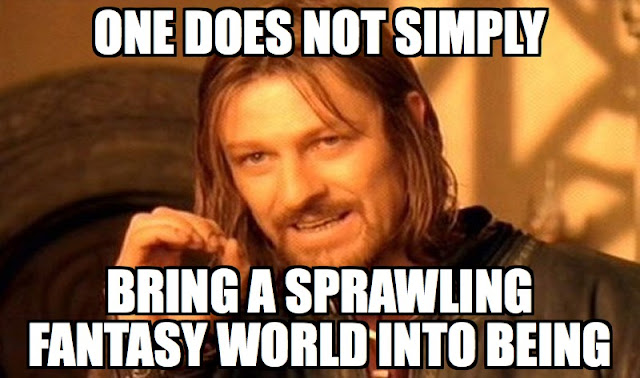 The second through fourth seasons captured much of what made A Clash of Kings and A Storm of Swords effective as novels, though they also amplified the shock value of their punctuated moments. In truth, there’s nothing in the show that isn’t also represented in the books, but the show frequently makes explicit what is relayed secondhand or merely suggested in the books. To put it another way, the books already make it clear how common murder, rape and torture are in this world, but the show positively revels in it. The effect is to cheapen their impact; we are frequently shown how grim and dark this world is, but little or no time is spent on exploring the implications and consequences of all the grim darkness. Not in any meaningful way, at least.

On the other hand, the show pulls off a fairly remarkable feat: adapting a sprawling fantasy epic for a medium that can do plot and character, but routinely struggles with the kind of myth- and world-building that are essential to second-world fantasy.

As with the books, though, things degenerate once the moves on to interpreting A Feast for Crows and A Dance with Dragons. Though mercifully eliminating the horrid Quentyn Martel storyline, nearly everything else that made those books a tedious slog is recreated for television (only now with more rape and torture!). The low quality of storytelling from these books mars seasons 3 and 4, and (in my view) outright ruins seasons 5 and 6.

In season 7, Benioff and Weiss officially moved past the source material altogether (though apparently with some input from Martin). Like many fans, I was deeply skeptical of their ability to right the ship. In fact, I probably would have quit the series if I hadn’t been worried that this was the only ending we’d ever get. Only, I found the experience oddly liberating – for the first time since season 2, I wasn’t comparing the show negatively to the books, even to the books I didn’t care much for.

Season 7 has its share of head scratchers - most notably, Jon Snow’s incredibly stupid plan to risk half the elite warriors under his command on a commando mission to bag a wight to show Cersei (who, predictably, is unmoved). But it was dirty fun.

The narrative decisions in season 8 are better, but nearly all require more exposition than they are given. Danaerys becoming the “Mad Queen” is a perfect example: history is replete with individuals who begin as idealists and end as ideologues; who through struggle come to believe the ends justify the means; or who believe the justice of the cause confers infallibility onto its avatar.

By the season finale, It is clear Danaerys has become all these things - only we haven’t made that journey with her. Rather, it happens so fast that you’re left wondering if it was something Tormund said, or that time Jon didn’t want to kiss her. It would have been much better, and much more believable if we’d had a few more episodes of developing paranoia and anger. 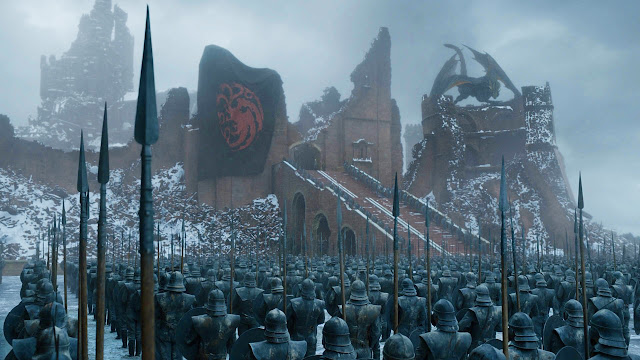 The season finale is, in a word, polarizing. Long-anticipated series finales often are, and several times I’ve been on #TeamKvetch (e.g. BSG). But I found this denouement quietly gratifying.

Bran becoming king is a bit weird, until you realize the whole point is to devalue kingship. And I was neither here nor there on Arya the Pirate (though what a great spinoff that would make). On the other hand, I Ioved Sansa asserting the independence of the north - regardless of the fact that her brother sits on the proverbial Iron Throne. Jon rejoining Tormund and Ghost felt equally appropriate, as did Brienne honoring Jaime in the annals of the Kingsguard - a touching act that almost helps you forget that bizarre moment when their friendship became gratuitously (and unnecessarily) sexual.

My favorite moment, though, comes when Tyrion waits for the new Small Council - which includes Brienne, Sam and new Lord of Highgarden and Master of Coin Bronn - and nervously keeps adjusting the chairs. It’s a tiny detail, but one that speaks volumes to the endurance of hope.

I don’t know if Martin will end his books the same way, or if he will ever end them at all. I certainly hope he does. But if he doesn’t, then at least we have this - a poignant and cathartic end to the journey we started so long ago.
Posted by The G at 5:58:00 AM