Kameron Hurley’s The Light Brigade steps lively into the tradition of Starship Troopers and The Forever War to provide a compelling look at a future conflict. 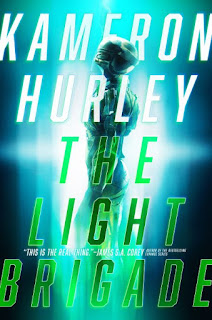 A future world where Corporations dominate the globe, have in effect become the superpowers that rule a rather tired Earth. For the lower classes, those who are not citizens, it’s a rather rough and precarious life. Dietz (who never gets a first name, and in a bit of ledgerdemain their gender is kept relatively unstated and understated) goes from a future and poor Sao Paulo, to fighting Martians on Mars, in what was once Canada, and far beyond. There’s just one problem: The lightspeed technology to move soldiers around has a strange effect on Dietz, and in short order starts to learn they are experiencing her future all out of order. Worse, thar futuie is a dark one in which the war they signed up for is far more terrible than they can imagine.

Dietz’s story is the central pole upon the twisting time travel story of Kameron Hurley’s The Light Brigade.

When I interviewed Hurley about the novel (read it here at NOAF), I wanted to be careful about being too spoilery about events when I asked her questions about the novel. I may have been overly cautious with my questions, for fear of revealing too much of the interesting things she does, plot and character wise with her protagonist. But if you took Starship Troopers, with its “Service means citizenship”, add in a large amount of The Forever War with its temporal displacement of its main character, stir in Slaughterhouse Five, with its meditations on the cost, and even the futility of war with a main character not sure when or where they are at any given time, and marry that to Hurley’s style and prose, you get The Light Brigade.

There is talk in some SF circles of “The Genre Conversation”, where a book can be said to be a reaction to, or a response to, a previous novel or a type of novel. It’s a slow and patient process, given the speeds of publishing, so you wind up seeing it in waves and changing battlefields. Tolkien’s reissue leads to Tolkien imitators, leading to Portal fantasy, turning around into the reaction of Grimdark to the greenshoots of Hopepunk, and Genre Beyond the Great Wall of Euripe. The New Wave gets the 70’s Ecological and feminism followup, which is reacted to and extended by Cyberpunk, which then leads into the New Space Opera, The Consolidation of the 90’s, and to the current era marked by concerns of freedom, endless war, surveillance, distrust, a more global perspective, and Climatepunk.

Hurley’s novel takes from Starship Troopers and The Forever War, as mentioned above, but is firmly in this new era as well. None of the action in the novel takes place in the United States at all, something that might have been nigh unthinkable 10 years ago, but now is much more in the light of the times. The corporate as opposed to governmental directed wars seems to harken from the days of Cyberpunk as well as current concerns. Dietz’ uncertain identity (which becomes a theme of the novel on a couple of levels) also feels rather contemporary, Rather than being explicitly trying to respond to any of these works, they are instead grist for Hurley’s mill to tell Dietz’s story The themes that emerge from The Light Brigade are the ones that come from the military side of Hurley’s oeuvre (going all the way back to God’s War)--war is brutal, uncaring, terrible things are done even by people trying to do right, escaping the cycle of violence once started is harder than it sounds. And perhaps even more resonant now than when God’s War first came out, in this age of “Fake news:”-- the first casualty of battle is always, always the truth. That comes to dominate the back end of the novel in a palpable and reasl way.

Hurley's writing in the novel is at its absolutely best with the camaraderie, often strained, between Dietz and those they serve with. The time out of joint problem puts an interesting inflection and strain on the relationships, giving them an extra bit of complexity. Especially, for example, when Dietz is dealing with someone they have already seen die. The combat scenes, too, are top notch, showing in vivid and brain-burning detail just what war is, and what it can do.

I’ve noticed, though, in some of Hurley’s works a, for me, not quite satisfactory sticking of the landing. The journey, the process, the getting there of her novels is sometimes stronger than the actual endgame. It is something that I found in this novel, disappointing given the twisty time travel plotting that works up to the point where the tangle of timelines and plotting becomes clear and explicated, but what comes thereafter was not for me quite as strong. It’s a heck of a journey to get to that endgame, though, a page-turning extravaganza that at it’s best, hits the notes and beats that Hurley’s fiction has in spade ever since God’s War:. Blood, battle, and brutal women

Best of all, for readers who do not want to get invested in another series and the concordant issues in the writing and reading of same, The Light Brigade is a one-volume complete story. This makes it a really good way to get a sense of Hurley as a writer in a single and self-sufficient volume. It’s a valuable thing in this day and age to take the measure of a writer at one go. The Light Brigade gives a comprehensive look at the strengths and talents of one of the most interesting writers in SF today.

Bonuses : +1 for a strong thematic story of war and its costs, personal and otherwise
+1 for a contained and complete story

Penalties : -1 for a bit of wavering in the endgame of the plot