I cannot fathom that Free Comic Book Day is behind us and we are already well into May.  The San Diego Comic Con news has been steadily dripping and it sounds like Conan is officially confirmed for a return. With the new format of his show, fans were speculating that he might be ending his run at SDCC and it is a great day for SDCC attendees that he is returning to San Diego. Even before he brought his show to SDCC he has long had a memorable presence in various off-site ventures. 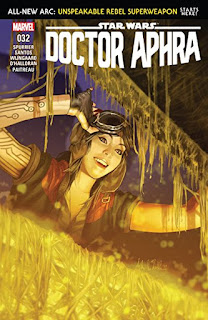 Pick of the Week:
Doctor Aphra #32 - We have a new arc for Aphra and it does a great job shining some light on her childhood and what is currently motivating her and her quest for ancient artifacts. We are also introduced to Vulaada, a young woman who Aphra has taken under her wings. The two are seeking an artifact that will fetch them 200,000 credits when Aphra discovers a rare Jedi weapon that is likely worth millions. This attracts a lot of attention and Aphra is confronted with someone she hasn't seen in a long time who thought Aphra is dead. I won't name names, but you can likely figure out who she meets that is going to make this arc a must read.

The Rest:
Star Wars Age of Rebellion: Boba Fett #1 - I don't envy anyone who has the responsibility of producing content on Boba Fett. The mysterious bounty hunter who captivated audiences in The Empire Strikes Back, has long been a fan favorite and some people who claim to be Star Wars fans are a bit critical of content they don't like. It brings me joy to report that this is a fun title that features Boba Fett riding in on a robot horse, tracking down fellow bounty hunters, and reminding us why he is so freaking cool.  I definitely look forward to watching Boba Fett track down additional bounties in what will hopefully lead up to his capture of Han Solo.

Star Wars Adventures #21 - This week we are treated to another delightful pair of stories.  The first story features Han, Luke and Chewy when they are dispatched on an important mission to purchase supplies.  Tempted by an opportunity to gamble some of the credits, Han puts the entire mission at risk. The second story features the cutest little alien and her attempt to pulling off a heist after hearing about an impossible mission.  I hope you managed to pick up the FCBD issue of Star Wars Adventures and enjoy these fun little stories set in the Star Wars Universe.