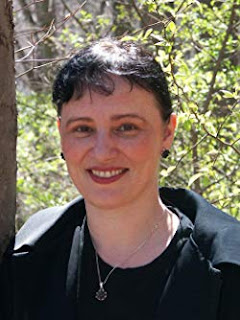 Anna Kashina writes historical adventure fantasy, featuring exotic settings, martial arts, assassins, and elements of romance. Her "Majat Code" series, published by Angry Robot Books, UK, received two Prism Awards in 2015. She is a Russian by origin, and a scientist in her day job, and she freely draws on these backgrounds in her writing. Her newest novel, SHADOWBLADE, has been released by Angry Robot Books on May 7, 2019. You can find her online at https://annakashinablog.wordpress.com/ or on twitter @annakashina

Today she shares her six books with us.

Uprooted by Naomi Novik. I just started it, but I am already spellbound. Books with fairy tale themes are my weakness, and this one has such a different take on it. I actually picked it up in a store while I was waiting for someone, and from the very first page, I couldn’t put it down. This almost never happens to me, and when it does, I treasure the experience.

I constantly wish I could read more. Between my day job, writing, and kids, reading becomes a guilty pleasure I have to get excuses for, rather than a normal activity. I really need to think of changing this somehow.

Now that I have picked up Uprooted, I will definitely read Naomi Novik’s other work.

The Orchid Throne by Jeffe Kennedy. I am a big fan of her work, which is in the same genre as mine – historical adventure fantasy with elements of romance. Every Jeffe’s book is a treat, highly recommended to any fan of the genre, and I just can’t wait to read her newest novel. It’s the first in a new series, upcoming this September from St. Martin’s. I am excited!

Terry Pratchett’s Witches Abroad. Coincidentally, it is also based on fairy tales ☺. I absolutely adore Discworld novels, and among those, the novels about witches and the night watch are my favorite.

I tend to re-read Witches Abroad every once in a while. It’s my comfort reading, and every word is just so brilliant.

There are close seconds among the Discworld novels, and I could easily add more to this list. I have a special shelf for them, and when I don’t have time to re-read them, I just tend to come and stare at them lovingly.

At a risk of sounding nerdy, I want to mention War and Peace by Leo Tolstoy. It was my required reading in middle school, and I devoured it at the age of thirteen or so. While I did find the detailed war scenes boring, I loved everything about the “peace” parts, the depiction of the Russian high society, the characters, the interactions, the love affairs. Oddly, I didn’t think of it as a serious book (probably because I also tended to skim over the more philosophical passages), but more like a very entertaining sitcom.

When I picked up War and Peace as an adult, I was looking forward to the same enjoyment, to reliving the fund I had as a child. But it felt as if I was reading a completely different book. The characters seemed flat, depressed, predictable, and boring. The war scenes became more interesting, simply because I could now appreciate the intricate research that went into them. But, I simply couldn’t get into it. I put it aside fairly quickly and never returned to it again.

I had an opposite experience with Tolstoy’s Anna Karenina, which started to make sense to me only as I grew up. I actually find it really cool that the same author can evoke such opposite effects with two different books.

J. R. R. Tolkien’s The Lord of the Rings. Having grown up in another country, with very limited access to books – especially by foreign authors – it was the first fantasy I ever read. I fell in love with it. One my favorite things about this book is the worldbuilding. I am a very visual reader, and Tolkien’s hauntingly vivid settings stayed with me all these years and influenced the way I approach worldbuilding in my own books. When I close my eyes I can easily see the scenery from his books, even after many years. The way he describes forests… My novels are nothing like Tolkien’s, but this trilogy taught me so much about building and effectively portraying a world.

My latest book is Shadowblade, coming in May from Angry Robot Books. It is an adventure fantasy, featuring elite blademasters, fancy sword fights, and romance. It tells a story of a young girl, Naia, who overcomes enormous odds to become one of the top blademasters in the empire, and then is thrown into an elaborate political plot where she would need to apply her entire skill set to get at least a chance at survival. It’s set in a medieval world, visually fashioned after the Middle East, and it was enormously fun to write. I hope the readers get the same kick out of it as I did when I wrote it.

There are two reasons why it’s awesome. First, the cover. It features one of the best art pieces by Alejandro Colucci, and it is not only beautiful, but also the exact reflection of the book. If the cover speaks to you, this is probably the book for you. And yes, it’s also really silky. If you see it in a store, you’d definitely want to hold it and caress it. You know how people always say not to judge a book by its cover? Not the case here. You should totally judge it by its cover, which is absolutely irresistible.

The other awesome thing is that I believe Naia’s story delivers an important message. She is a young girl who starts out of a very bad situation and fights her way to the top – just because she never gives up. This is the motto I live by.

And yes, there are the sword fights. I tend to feature skilled warriors in my books, and I always wanted to write a novel that describes some of the behind the scenes work that goes into training someone to fight like this. This was one of the reasons working on Shadowblade was so much fun.