Microreview [Book/Stage]: The Half-God of Rainfall by Inua Ellams

Unexpected journeys in godhood and sports 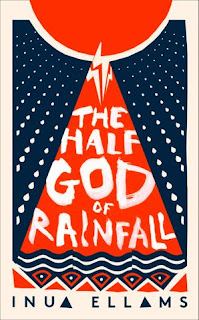 The Half-God of Rainfall has been an exercise in the unexpected for me, though perhaps it shouldn't have been. First, I'd been rather dense in picking up that this book, by poet and playwright Inua Ellams, is in fact a story in verse. On that discovery, I had the standard concerns about whether I was really qualified to read this book I'd committed to review, or whether daring to have an opinion on some words that sometimes rhyme is inherently beyond me as a prose reviewer. Then I calmed down and opened it up. Lots of pages later, I get to the last line and think "Cool, now time to review something new and interesting that expands my horizons beyond the world of prose". However! No sooner do I start starting said horizon-expanding review when a google search teaches me that The Half God of Rainfall is not just a poem by a playwright, but a poem that is about to be staged in London. In the spirit of "why broaden one horizon when you can broaden two", what follows is therefore my thoughts not just on The Half-God of Rainfall in its written form, but of the performance that brought it to life in the Kiln Theatre, Kilburn in May 2019. 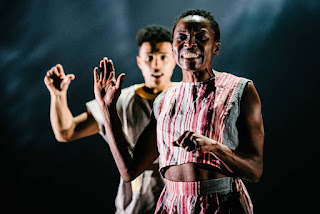 The Half-God of Rainfall is a story of ancient deities and their impact on the lives of mortals, told through a distinctly modern lens. Its hero is Demi (Kwame Odoom), the child of Zeus and a mortal woman. His mother, Modupe (Rakie Ayola), was given the protection of Osún, the Òrisà of rivers, only to have that protection fail due to a contest between the Òrisà's God of Thunder and Zeus, with a mortal of the winner's choice as a prize. Demi, half-god of rainfall, is born immediately from his mother's rape and grows up knowing both her love and grief, and his own uncontrollable powers. We meet him by the side of a basketball court, barred from play because of his tendency to literally flood the land when he cries, at the moment he turns his ability to "make it rain" from a literal ability into a figurative one and begins his rise to the top of world-class basketball - and attracts the notice of both the Òrisà and the Greek pantheon.

The language of Half-God is gorgeous, full of rhyme and flow that demands to be "voiced", even if you're just talking in your own head on a packed train carriage. On the page, it's subtle and fluid, and the transformation and feeling of "discovery" as each of those rhymes and lyrical moments appears in sound is one that I delighted in. Running through this is an exploration of dialect and narrative mode, from lines of dialogue that feel lifted from classical translations or myth retellings to more modern vernacular, like the exploration of "Nigerian tongues round American accents" on the children's basketball court. It makes for a rich reading experience that translates as well as you'd expect to stage, where it falls on just two actors to play out this range of voices and to differentiate the revolving set of gods and mortals of these various pantheons for the audience's benefit.

Demi's journey from crying child to vengeful young man happens quickly, and it feels like his character gains most going from page to stage, allowing us to follow as he goes from from excited child to confident, self-assured demigod to an inevitable path to hubris and downfall. Of course, it's inherently a bit absurd to watch a tall adult man play a child on stage, and like Philip Hamilton, the other major example I've recently seen, our amusement at Demi's character is abruptly cut short when we realise he's grown up to match his actor's physicality, and we have to start taking his ambitions and their possible destructive results seriously. Because Kwame Odoom doubles as other characters, most notably Sàngó, Òrisà of thunder, who is definitely not powerless (although he spends much of the story claiming he is), the ability to sell Demi's youthful journey is even more impressive.

While the title is ostensibly about her son, it's Demi's mother Modupe who (intentionally) steals the show. Unlike the older myths it riffs off, where women are included simply to be owned and use by men and to suffer without agency, this narrative galvanises her as a woman whose life has been shaped by male violence and impunity, but never taken from her. Despite all their powers and schemes, the male characters all ultimately end up as fuel for her arc, rather than the other way around. It's interesting to contrast the text, which puts her at the head of a chorus of similarly wronged women who were assaulted at the hands of Zeus or other men who used their power to take what they wanted from the women around them, and the stage show, which with just a single woman centres far more explicitly on Modupe's individual rage. It's reflective of Modupe's relative isolation throughout the entire play: because of the way the character doubling falls out, Rakie Ayola plays a lot of secondary characters at the point they intersect with Demi, as well as being the Zeus and the Osún to Odoom's Sàngó. It means that, at pivotal moments where Modupe interacts with these characters, she's in fact alone on the stage, her protectors and her attackers all embodied within the same actor and our reactions to them all seen through the lens of her telling. It's powerful stuff which puts her firmly in charge of her own story as far as the audience is concerned, even while she grapples with the higher powers who act on her life in the narrative itself.

In poetic form, Half God of Rainfall took very little time to put me under its spell; on stage, it takes a little longer, with deceptively light-hearted initial scenes at the start; it's not until the gods take to the stage that the production really gets to show off its actors' talents and the versatility of its storytelling mode. Once you're hooked, however, it's a riveting and immersive experience, with production values to match - an abstract but depth-y lighting backdrop sets the scene for both mortal and godly realms, and a stage which resembles the cracked earth of the original basketball court becomes something more by the end. The non-linear narrative is easy to follow, although the time period between Demi's birth and the moment on the court is a bit blink-and-you-miss-it in both mediums. That said, criticising an epic poem for starting in media res and not quite explaining all the facts about getting there would be a serious misunderstanding of the genre, and the emotional facts are sort of all we need to know about Demi and Modupe's relationship before his rise as the Rainman.

The inevitable constraints of time and space are such that, for most of you reading this, it's not going to be possible to check out the Kiln's staging of this fascinating work - though if North London is in your radius before May 17, I urge you to check it out! - but for me it was an unusual opportunity to experience a text that already pushed me out of my comfort zone in a new way. Anyone interested in explorations of myth and epic form with a focus that goes beyond the well-trodden world of European legend would be well served by checking out Ellams' work, and if you ever get a chance to see it staged? Even better.

Bonuses: +1 Expanding my horizons, and the horizons of epic poetry in general, in the best possible way

Penalties: -1 Gods exist outside of time, but this stage production does not... sorry, future review readers.