The big news this week is that Joe Hill's NOS4A2 debuts this weekend on AMC. The story follows a special young lady who ends up tracking down Charlie Manx, an evil being who appears to be immortal and traps people in Christmasland.  I read the book many moons ago and the series looks to be amazing. The first episode is on June 2nd at 9pm. 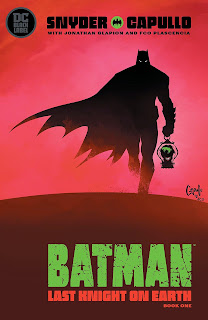 Pick of the Week:
Batman: The Last Knight on Earth #1 - Reunited and it feels so good! Scott Snyder has paired up with Greg Capullo for a limited Batman series. Batman has awoken from a 20 year coma only to learn that his entire life has been a dream. The characters he has been fighting all of these years in Gotham are his caretakers in Arkham Asylum and he is the person who killed his parents in Crime Alley all of those years ago.  Clearly this is not truly the case, but Batman has to fight his way out of the Asylum and is on a quest to learn the truth. My favorite scene involves Bruce confronting his captors and learning that the cowl was merely a device added to a straight jacket to help with his electrotherapy.  Watching Batman in a straight jacket with a cowl fighting in Arkham is truly memorable.  I am curious to see where this is headed and thrilled to read a book written by Snyder and drawn by Capullo.

The Rest:
Star Wars: Darth Vader Dark Visions #4 - This mini-series of one shot issues veers off course a bit as its focus is more on a rebel who is dealing with issues from his past that prevents him from potentially taking out Vader early on in his rise to power. While it highlights the power of Vader and the Empire, it also humanizes the rebel forces and serves as a reminder that everyone has their flaws.

Stranger Things: Six #1 - This series focuses on an earlier resident of Dr. Brenner's lab who is know as subject Six. She has just joined the program after her parents recognized that she has special powers. There is something holding her back, but she is starting to have visions of the upside down. While it doesn't quite capture the nostalgia of Stranger Things, I am hopeful with the direction this prequel is headed.

Daredevil #6 - A new arc of Daredevil is here and I am not entire sure what to think of it. Daredevil hasn't been seen for months and Matt Murdock is working as a parole officer. The Owl is gaining power and a frustrated Mayor Fisk is reaching his breaking point. This issue feels like the calm before the storm that is going to force Murdock out of retirement despite the fact that he says he has never been happier. What poor tragedy is Murdock going to face that will bring him out of retirement? While there wasn't any foreshadowing in this issue, I fear for Foggy's well being.