The Ten Thousand Doors of January uses an in-book book, and a discursive method to tell an ornately beautiful story about the power of Doors and stories. 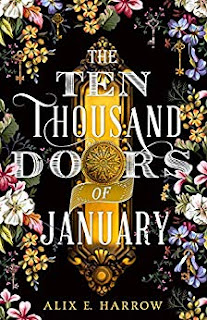 January Scaller lives a peculiar life. The daughter of a man who travels the world on behalf of a rich and powerful man interested in curiosities, her education is idiosyncratic, peculiar, and she is rather sheltered. The appearance of a Door (and that is a capitalized door), and later, fatefully, a book called “The Ten Thousand Doors” changes January’s life forever, revealing truths of her heritage, her origins, what happened to her mother, and her own power.

This is the story of The Ten Thousand Doors of January by Alix Harrow.

The novel is a rather slippery fantasy to try and get a hold of. Is it a Portal fantasy, as the back matter and the title suggests? Yes, and no, the Portal aspects of the fantasy are not the central theme. Is it a coming of age story, of a young woman coming into herself? Yes, but there is much more going on with theme, history, theory and thought on it. The book is, however, a fantasy about the power of stories, and where stories come from, and how stories, for good, and bad, accurately and inaccurately, shape us and mold us, and make us what we are--and sometimes, if we find the right story, what we want and need to be.

The novel starts gamely enough, introducing us to the protagonist, who briefly encounters one of the world-spanning Doors. This brief look into another world taken away, the novel shows the course of January’s life as she is given the titular book. The Ten Thousand Doors is a Book of Gold¹ for January. Large portions of the book are taken up by text of this book within the book. What seems to be a conceit at first at reading what seems to be a scholarly work (there are even footnotes) slowly pulls back to reveal the true nature of the book, and January’s connection to the book, to the story within the book, and why and how the book came to her.The book unlocks January in other ways as well, propelling her from her life in Locke House into a wider world, into wider worlds. This is a novel about the power of story and how stories and books can shape who we are and who what we want to be. What is an implicit theme in a lot of books where reading is important to a protagonist,  is explicit and face forward, here

The plot in the book is a constant state of unfolding and reassessing what has gone before, as revelations as to who January is, who here parents are, and their relationship to the story in the book unfolds more and more. The author takes a patient approach to these revelations, allowing the reader a chance to try and work out what is going on before the text makes it explicit and unmistakable. Looking back, the clues are all there right from the beginning as to the true state of affairs, but the joy is stepping through the many doors, and seeing the unfolding of the story as a whole. The author seems to be writing for the moment when a reader, with a new revelation on the page, connects the dots back to a prior event and realizes what really occurred, and its provenance for the protagonist and her world.

The writing is beautiful and evocative. The portions in the present, with January’s story and coming of age, are wonderfully invoked. From sensory descriptions and evocations of place in all senses, to word choice and rhythm, January’s story renders very well. And at the same time, the rhythm of the book within the book is distinctly different and equally well done in it’s pitch and tone. The author manages the feat of having two very different and distinct voices of writing style within the book, braiding them together as the book within the book braids with the main plot of the novel.

If the book has a major weakness, it is in its unconventional approach and focus. That sort of focus, without a large drive forward means that it lacks a bit of the punch on the more basic levels of plot and action. The novel’s focus on the things it does very well means that the plotting of the main line of those beats itself doesn’t come off as well as when the novel is discoursing on story, or exploring what it means to unlock a story. This is a novel to savor in and think about stories and Doors and what has happened already, and what it means now,  much more than turning the page to find out what happens next. It’s a novel that invites and encourages reflection backward more than looking forward, which does rob the novel a bit of momentum that it could sometimes use. This is, I find, is a book for people who have already found their Book of Gold and are seeking to unlock many more Doors.

For those readers, however, this book is a jewel. The Ten Thousand Doors of January is an excellent debut, whose words about story and the power of story suggests that the author may have many more stories beyond this one to tell us. I for one would like to read them.

¹Book of Gold is a term from Gene Wolfe, a Book that unlocks the world of literature for a reader. In this book, the Ten Thousand Doors of January unlocks January’s entire subsequent life.

Bonuses : +1 for beautiful, deep writing, both in the book within the book and January’s story
+1 for contemplatively interesting thoughts and explorations of the nature of story

Penalties : -1 the plotting of the antagonists and their action is pale comparef to the richness of January’s coming of age story