Ode to GoT Nihilism


When a genre accumulates enough history, traditions, tradition-conscious fans and demolition-ready clichés, a certain kind of work will emerge: something that takes everything a little further, makes it a little more believable and makes everything that came before look a little silly.

That's what happened to superhero comics in 1980s with Watchmen (by Alan Moore & Dave Gibbons, 1986-87) and Dark Knight Returns (by Frank Miller, 1986), and now it has happened to audiovisual epic fantasy. Or, well, to be fair it probably happened almost a decade ago in 2011 when we first found out that unexpectedly decapitating the show's protagonist is indeed possible and not all dwarfs in fantasy have to be small fake Scots who are heavily invested in the mining industry.

For those in the audience who had read Martin's books there was nothing unexpected in Ned Stark's death (or any of the other Stark deaths), of course, but majority of the millions of viewers (including me) has never read a single line of Song of Ice and Fire.

So, Game of Thrones is finished. What are we left with? 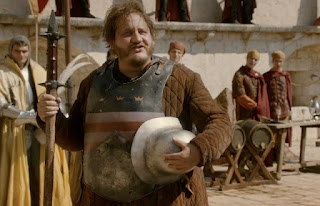 A monumental piece of work that all future fantasy shows will probably be compared to, whether that makes any sense or not. Just as any morally complex superhero work interrogating its genre and history will always be measured against Watchmen, any piece of fantasy television that tries to look beyond the Manichean moralities of Tolkien is going to be evaluated with Game of Thrones at the back of everyone's head.

Whereas Watchmen was "the superhero story to end all superhero stories" (which it of course didn't do), Game of Thrones maxed out everything in the epic, post-Tolkien fantasy: more characters, more exquisitely constructed world, more nihilist politics and royal succession play-offs, more mysterious religions, more brutal battle scenes (nevermind the goofy military tactics in season 8), more sex and incest. It's a "fantasy TV show to end all fantasy TV shows", in the sense that all future fantasy entertainment will be informed by GoT on some level.

Watchmen seemed like the ultimate takedown of superhero lore. Wholesome, child-friendly superheroes were exposed as reactionary superjerks, alienated superhumans or in the very least a bit unstable people with unorthodox sex drives — that is basically the history of superhero comics in 1987-2019. I can safely predict that going forward, heroes in epic pseudo-medieval fantasy shows will have to make difficult and morally grey choices, suffer brutality and brace themselves for some complex, deadly scheming.

For me, the special ingredient of the show was always the nihilist outlook, something quite nonexistent in pre-GoT audiovisual fantasy. Despite all pompous talk about honor, gods or good and evil, there's no getting around the fact that political power grows out of the barrel of a gun (or it's medieval counterparts), as Mao Zedong opined. Nobody is safe and cruel things happen to people who don't deserve them. These themes will probably be developed further in post-GoT shows. Hopefully they'll be a little more thoughtful than the bulk of "edgy" 90s superheroes and choose to emulate other aspects than just tone-deaf brutality and sexual violence.

One can perhaps make the case that it was in some sense visionary to butcher children, soon-to-be mothers, old women and animals on-screen in the most popular and most expensive TV show of all time to underline that nobody is ever safe. However, I was more impressed with less bombastic lessons of nihilism, like Littlefinger's plot (in season 4, I think) featuring Ser Dontos Hollard, the fat lord who Joffrey wanted to kill but Sansa Stark saved by making him the court fool in some earlier season. Dontos's thank you speech to Sansa about his house's demise is heart-breaking — we think we know the character and sympathize with his bleak circumstances — but later it turns out that it's all part of an elaborate hoax put together by Littlefinger.

Playing with characterization and audience expectations, it's the small details like this that made the show really memorable for me. Sadly, poignant details cleverly playing with the characterization and audience expectations are exactly what was missing from the final season. What also seems to have disappeared somewhere along the way is the show's nihilist attitude altogether. Sure, Daenerys becomes a cruel despot in the end, but that is easily fixed with a knife through her heart, and justice and harmony prevail.

What in seven hells is that?

This was supposed to be a world in which Hollywood morality is challenged and everything is complex and precarious. I really feel we would have deserved an end in which all the good lords and ladies of Westeros are ready to stab each other in the back to get just a little more power. Instead, all we get from the final minutes of the great struggle for power is the phrase "Uncle, sit down" — like the democratic presidential primaries needed any more weaponizable pop culture quotes at this point.