An action packed lost heir story with a refreshing focus on autonomy and consent. 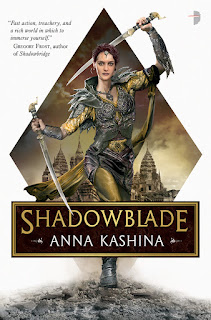 Another day, another book with a lady with a sword on the cover. In the case of Anna Kashina's new novel, we are treated to two swords! Winning a place in my heart over the "just a knife on its own (or maybe a snake)" cover trend, the promise of a lady with a sword, especially one striding so impactfully towards the reader, is one that's hard to resist even for an action-agnostic reader like me. Who is this lady in comfortable footwear and a practical haircut (and subtle but unmistakeable decorative boobplate, but let's gloss over that for a minute)? She's holding one of those swords like I would hold the one supermarket bag I'd accidentally put all the heavy tins into, but despite that she seems to know what she's doing, and I'm excited to learn exactly what she's got going on.

This, we soon learn, is Naia. Naia has been training to be a member of the Jaihar, a stratified order of elite warriors who are drawn from orphans and other children pledged to them at a young age, and trained from birth in various martial and mystical arts. Naia is uncannily good with a blade, but has apparently made a lot of enemies in the lower camp where she's been trained, and is on the verge of being kicked out for a mysterious insubordination incident: she's attacked an instructor and has curiously little defence for herself. Luckily, fate intervenes, as the head of the Daljeer, scholarly order shows up looking for a young woman at just the right age to impersonate a mythical princess from the murdered Challimar dynasty. After a few tests demonstrate that Naia's natural abilities significantly surpass the training she's been given so far, she's given a second chance in the upper camp with the Jai, and put on a path to engage in political machinations which, we note in an aside, she might actually be born to do...

Naia's training and her mission to impersonate Princess Xarimet divide Shadowblade neatly into two halves. The first half, in which Naia goes from near-outcast to prodigy of the upper camp, sets out an interesting and refreshing take on the concepts it is dealing with. Although Naia is set up as the only person who can set out on the particular mission she is being trained for, and that she could be more than the impersonator which the Jaihar officially want her to be, Shadowblade returns again and again to Naia's agency and her own desire to learn and train with the Jai. The Har section of the camp where she has come from is defined, at least in the limited views we get of it, by brutality and bad eggs, with the incident that almost led to Naia's expulsion soon revealed to involve her stepping in to protect a servant almost being beaten to death. The Jai, the elite warriors, instead come across as being defined by respect for each other and for their students. It's fascinating to watch Naia go from being beaten down and undervalued to training with people (mostly men - unfortunately this is a pretty dude-heavy story, with only two living women of particular note) who respect her, encourage her to reflect on her performance and identify her own weaknesses. There's a constant prioritisation of consent in Naia's narrative which could so easily be absent from a story like this, especially once the romantic tension with Jai master Karrim starts.

Naia's training goes by in a series of montage-like chapters which take us through multiple years of weapons training, understanding her own weaknesses, and learning more about her Chall heritage from Mehtab, a mysterious woman from the Daljeer order who quickly becomes one of Naia's most trusted tutors. She also introduces her to the magical in-universe reasons for decorative boobplate, which involve iron-calling properties that throw off everyone wielding conventional weapons, and... that bit is fine, I guess. The building up of trust and agency in the first half of the book plays right through into the political action of the second, where a fully trained Naia is sent off on her mission to challenge for the Empire's throne in the wake of the old Emperor's death, removing the unpredictable son who has seized it in favour of a more pliable - though uninspiring - candidate favoured by the Daljeer. The deeper threat to Naia comes from a slightly different angle and builds up into a climax which really pays off the themes of consent, autonomy and learning to trust one's own judgement and surround oneself with people who respect it. There's not much that's surprising about how this plays out - the twists are well signposted in the narrative and the general thrust of what's going to happen was fairly easy to see unfolding - but this is a narrative that's more about the "how" than the "what", and the unfolding of Naia's victory not just within the terms of her mission but against those in the background who are setting her up to be a pawn.

Shadowblade is a book which seems to know exactly what it's doing and what it wants to prioritise, and how to make the other elements of the story work towards that goal. The focus is on delivering an action-packed story true to its blade-twirling hero, and that means the political plot, the empire's history with the Chall and the betrayal of a generation before which led to Naia's coming into the Jaihar are all just fleshed out enough to carry her story. There are vaguely Asian, desert-culture trappings to Chall and Zeg which aren't really fleshed out, but there's honestly not much recognisable "culture" in Naia's sheltered corner of the world - we could be anywhere, and I'm fine with that. The lack of women in Naia's world outside Mehtab is odd and frustrating despite the narrative attempts to wave it away, but there's a core of central characters who, with the exception of a few interchangeable seniors, are all distinct and interesting with believable quirks and motivations. Shadowblade leaves itself open, though not in need of, a sequel and it will be interesting to see whether some of these worldbuilding aspect get explored further in future instalments.

Action-driven novels are hit and miss for me but this one was satisfying on a level that I wasn't expecting it to be. While Naia's world is not the deepest or most fleshed out you're likely to visit this year, this entertaining, driven story does what it sets out to do while centring consent in a way which most narratives of this trope have no time or space to do. If the confident, blade wielding woman on the cover of Shadowblade is calling to you, I recommend you pick up her story and give it a try - it does what it says on the tin, in ways that I'd like to see a lot more of in future. Just, maybe we can go with plot relevant full body armour next time, please?

Bonuses: +1 Weaves consent and autonomy into a destiny driven story; +1 Satisfying action with a great payoff


POSTED BY: Adri is a semi-aquatic migratory mammal most often found in the UK. She has many opinions about SFF books, and is also partial to gaming, baking, interacting with dogs, and Asian-style karaoke. Find her on Twitter at @adrijjy.
Reference: Kashina, Anna. Shadowblade [Angry Robot, 2019].
Posted by Adri Joy at 12:00:00 AM