Game of Thrones: The Wheel Turns On 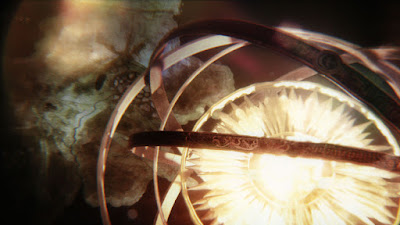 And so, after eight years of TV, and longer for those who have been reading the books, we know who gets to sit on the Iron Throne (or, uh, not) for the next generation of Westeros' future. After laying waste to Kings Landing, Danaerys Targaryen is killed by her lover-nephew; the ticking time bomb of Jon Snow's heritage suddenly gets stopped by a show of very selective influence from Dany's remaining loyalists, and our remaining heroes fail to scrape together enough other named characters to hold a crisis meeting on what should happen next. It turns out that the best option is apparently for Bran Stark to take the Iron Throne and to rule over six of the seven kingdoms, allowing his sister to secede with the North and fulfil the long-held dream of independence for that coalition of regional accents. The Dothraki and the Unsullied then sail away without a fuss (collectively deciding to crash Missandei's home, which I'm sure is a great place for a frustrated and aimless military force to just show up), Arya disappears off in the other direction, and Jon Snow goes back to the wall to be the last Targaryen again. At least, to the internet's delight, he gives his direwolf a proper pat. 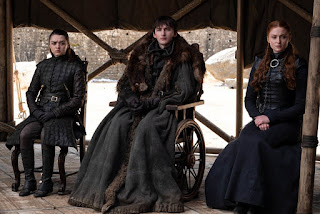 After all the battles and the deaths, and the point of no return in the previous episode, the last scene before the "epilogue" stars a bunch of mostly-men, many of whom are literally appearing in this scene for the first time having silently replaced more memorable and now more dead main characters, as they silence the only remaining person of colour in the cast, laugh down the idea of democracy, and award the "best story = best claim to the throne" prize to Bran, a character whose trajectory has been so slow and dull that it was cut from an entire season without causing anyone any disappoint whatsoever. Somehow, despite lampshading the fact that Tyrion's dwarfism precludes him from having the popularity to rule, neither Bran's disability nor his chronic lack of statesmanship, trustworthiness and personality raise any eyebrows, and the scene does a decent job of making him seem like a rational, safe choice. This is mostly achieved by drawing attention to the fact that he's not interested in the actual ruling business and is going to leave that in the "safe" hands of his small council (which includes Bronn, whose only other scene this season was to rock up and threaten some people with a crossbow, because somehow Bronn is the kind of character for whom indifference to altruism and the value of human life is endearing rather than deeply disturbing). Also, he's a man, which given the arc of this season probably helps, even if none of the characters make specific reference to it.

If you're reading this thinking that I don't sound very impressed by the whole thing... good catch. What's harder - impossible, I think - to really get to grips with is whether that sense of deflation, where the send-off of our remaining faves is supposed to stand in for a full wrap-up of the narrative, is itself a fitting narrative choice. After all, in many ways this ending brings us back to where the story opens. When Ned Stark is drawn to Kings Landing, it is around fifteen years since the heroic events of Robert's Rebellion, and we are thrown not into the righteous upheaval of those events but into the decline of the peace made afterwards, as King Robert struggles in an unpleasant political marriage while surrounded by people who are better at playing the game than he is. Robert and Ned's heroic revolution, freeing the Seven Kingdoms from a mad King's failing dynasty, is immediately shown to have created something not much better than what it replaces, and soon the entire continent is in even worse disarray than when the Rebellion began. It's hard to see how a story whose opening is one big subversion of a righteous takeover could end satisfyingly with another righteous takeover, no matter how good the claim to rule might be. The reign of Bran the Broken is a weird choice that doesn't seem to really reflect Westerosi political values, and my reading is that that makes its own sort of sense: this is not a happy ending or a final throw of the political dice, just an in-the-moment choice that brings this particular period of upheaval to a subversive, questionable close. 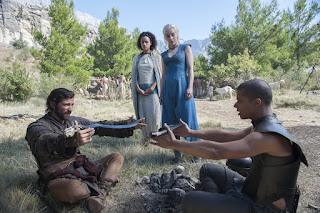 In making this the climax of the story, of course, Game of Thrones has to discredit the opposing arc: Danaerys' eight-season long quest to "break the wheel". Now, clearly there have always been tensions in Danaerys' strategy: her absolute belief that she is the rightful ruler of Westeros, a land she's basically never set foot in, because of her family heritage, doesn't feel like a natural fit with her equally strongly held idea that traditional heirarchies should be abolished (not that she's the first to hold such contradictory opinions by any means). The show's handling of race and imperialism as she conquers her way around around Essos doling out crucifixions and roastings is a subject that needs far more space to unpack than I have to dedicate here. That said, the change that Danaerys has advocated for over her complex eight season arc - and the way that change has been taken up and championed by more interesting and criminally under-utilised characters like Missandei and Grey Worm - doesn't automatically get thrown out of the window the second Danaerys herself goes beyond the point of audience sympathy.

No, it takes the death of Missandei, and the removal of Grey Worm's own conscience and agency in the final episodes, to bring us to a scene in which, for a second, Tyrion's silencing of his perspective - while a nameless white male lord laughs away the entire concept of democracy and the humanity of the poor - feels like an OK thing to have happened. Go sit in the corner, Grey Worm, and think about how you shouldn't have killed those Lannister prisoners, and then we'll let you come and talk when - oops, nah, we just decided everything without your faction's voice. It's rushed and contrived but Game of Thrones manoeuvres its final act into a position where the weight of characters who want to maintain status quo, or a near version of it, is just strong enough for us to sign up to their perspective without realising what that means for the other characters we may have been rooting for, in however problematic a way.

And so the wheel turns on, unbroken. The Unsullied and the Dothraki sail off for Naath, the wildlings return north of the wall - the gate closing ominously behind them despite there being, you know, no Night King any more and also a big hole in it over on the east side. A few people rise, and a few who had risen fall back down again, and the lives of the vast majority of Westerosi continue well off camera. The attempt to make things better by doing away with the old system has failed, and the lesson is that the old system is really the only thing we've got, and all we can do is keep trying to make it work despite the cracks that have already appeared. The wheel turns, unbroken, and that's what this series we've all just spend the decade watching leaves us with: change isn't going to work, so let's find the people least likely to fuck us over in this broken system.

To which I can only say: Dracarys. 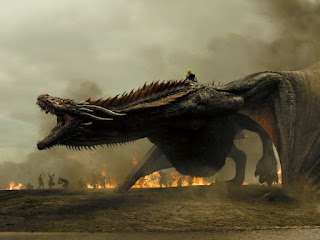