The Undefeated uses the life history of a journalist to tell the story of impending fall of a galactic civilization in an oblique, interesting manner. 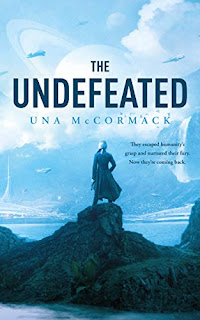 There are many ways to tell a Space Opera story. Big space battles with fleets of ships using their silicon ray weapons to destroy the enemy. Or perhaps a story of diplomatic intrigue, where the main character journeys to the heart of an Empire , using words as a weapon to direct, and divert the fate of worlds. Or even have an Opera company tour a bunch of worlds in a spacecraft of their own.

Una McCormack’s The Undefeated goes for a subtler, more oblique approach, by using the life story of a famous, award winning journalist, Monica Greatorex,, whose journey back to her home planet braids with not only the story of her planet’s annexation into the Commonwealth, but of the enemy who seeks in turn to overthrow that Commonwealth.

It’s a very subtle story that McCormack chooses to tell here, in a very muted palatte that provides a more literary and measured approach to a space opera verse than what you might expect from the premise, or the cover. Greatorex’s return to the planet of her origin, which is shown to be going against a tide of refugees and people fearful of the mysterious returning enemey is a slow and stately opening that holds out a few mysteries to keep the reader going--who and what really are the jenjer? Why is Greatorex returning to her home planet, now? What does all of this do with her career, with the conflict, with the fate of the Commonwealth.

Once she is on the planet, the narrative picks up, and firmly splits into two timelines. In the present, Greatorex returns to her now abandoned  hometown, in the backcountry of the world, a town of leisure and money that came across like a high-end tourist town in a distant place, like a West Yellowstone, Idaho, or a Taupo, New Zealand. Torello might also parallel well to a Jackson’s Hole, Wyoming, since it is explicitly stated that only the wealthy come to it.

Her arrival in Torello  brings that other timeline to mind, showing her growing up in this town, and seeing events from a child’s perspective and from deducing things in her present-time stream of thought. The story from her childhood is one of colonialism and societal conquest, as the Commonwealth, seeking to destabilize Sienna and have the independent planet fall into its orbit and control. This narrative works as counterpoint to the present, when all who can flee the planet, can, and also reveals the role Sienna has played in the burgeoning enemy threat. In addition, we get the full biography of how and why Greatorex became a famed award winning journalist and completes her story.

All this makes the novella high on introspection and parallel themes, and very low on other meters that space opera are generally measured on. The worldbuilding is done with a light hand. I would have liked to have learned a lot more about Sienna, and Old Earth and other places, but McCormack uses words sparingly and carefully. Much like Greatorex, the author uses weapons carefully, like weapons, to greatest effect. The Earth she describes, though, reminds me, in the vaguest sense of Karl Schroeder’s The Million, and I think there is definitely a class argument that McCormack is advancing here, with the main character herself very aware as an adult of her power and privilege--and how that power and privilege are, in the end, not lasting things.

I do wish a few things had been fleshed out a bit more, especially in the setting. Greatorex, we come out of the story completely understanding from start to finish. The world, and even the enemy, are a little underwritten for my taste. I’d have liked for a little less economy of words. The other thing to note is that this is definitely not a space opera story if your expectations are for the big wide canvas that space opera provides. Even given its limited environment and “sets”, this is a highly insular and introspective story that is used to illuminate a couple of larger stories we thereby get a very limited viewpoint on.

That is part of the frustration and genius of this novella. It crisply tells Greatorex’s story, that tells the Space Opera story, but it is a looking through the keyhole into a world I want a larger viewpoint on. The ending of The Undefeated  makes this a crisp and complete story in one volume, I don’t see any real need or structure to continue this story structure. For readers who want a complete and concise story in one volume, this is definitely a story to sink into, get to know a life, and get out of, all the while pondering the essential sociological question it raises.

Penalties : -1 for expectation management issues--the story is far more introspective than the the genre, the cover or cover copy might lead you to believe., -1 for some bits of the setting slightly underwritten for my taste

Nerd Coefficient: 7/10. An enjoyable experience, but not without its flaws

POSTED BY: Paul Weimer. Ubiquitous in Shadow, but I’m just this guy, you know? @princejvstin.
Posted by Paul Weimer at 12:00:00 PM