My prep for San Diego Comic Con continues as I secured tickets to one of the bigger events, Funko Fundays, that was my son's favorite part last year. While the stress of that is behind me, there is a lot of work to do to ensure that our final hurrah goes off without a hitch. If any of my fellow nerds are prepping for SDCC I hope things are going well for you. 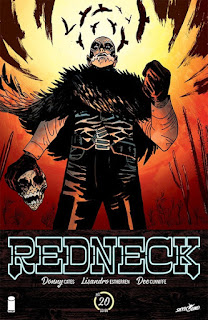 Pick of the Week:
Redneck #20 - Donny Cates appears to be taking this series straight towards more bloodshed. We learn that JV and July are seeking the help of Carrona to save Bartlett.  It turns out that Carrona created Bartlett a long time ago and is a powerful vampire well versed in Mexican vampire magic which I hope is a real thing. Carrona is willing to help, but it will cost the vampires the system that was put in place that banished a lot of demons to Mexico and would potentially unleash them on the rest of the world. Cates teases a couple of other new characters and it is clear that the upcoming war is going to be violent.  I am digging the new arc and love that Cates took this series south of the border.

The Rest:
Star Wars Age of Rebellion: Jabba the Hut #1 - I can't help but wonder if this title was an excuse to give the fans a little bit more of Boba Fett.  While it was interesting to see how Jabba manipulates those around him, there is something satisfying about a Boba Fett on the offensive and not flying into the mouth of the sarlacc. Getting an inside look at Fett working directly for Jabba was entertaining as was watching an army of Jawas fighting with their own battle droids.  I love the thought of the Jawas fixing a bunch of old droids from the Clone War days to help them with confrontations on Tattooine.  I am not sure if this is an ongoing series or not, but I would pick up the second issue as this was chock full of entertaining nostalgia.

Bone Parrish #9 - We are nearing the end of this series that features the street drug ash, made from dead bodies and the factions that are competing to control the supply. The cartel makes a power move destroying a lab and the Winters appear to be close to losing their power in the ash game. I returned to this book after taking some time off and need to go back to see how we reached this breaking point and the impact that the visions are having on the characters. Cullen Bunn remains adept at delivering books with a unique horror twist.