The best Saturday of the year is nearly upon us!  This year it is extra special, because in addition to being Free Comic Book Day it is Star Wars Day!  May the 4th be with you all. I hope you all get the chance to make it out to your friendly local comic shop (FLCS) and pick up some free books for you and your family.  To find a participating store near you click here.  In my annual tradition, I will share my top five picks for FCBD in no particular order. 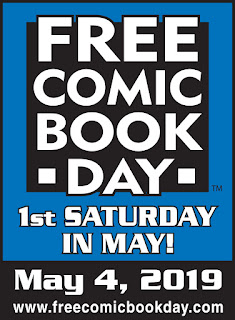 Grumble vs. The Goon - This title has the creator of Chew, John Layman's, official stamp of approval and I am immediately interested. This crossover comic takes the characters from Grumble and puts them in the world of The Goon. Grumble features a hustler who was turned into a pug, partial demons, and a threat from evil forces that threaten the fabric of existence. I will admit that I have not read any of this series yet, which is why I love FCBD and the opportunity to check out something new.

Star Wars Adventures - I have really enjoyed this all-ages series and am thrilled that a new group of fans will be able to check out this series on Saturday. The FCBD version features a story in which Han and Chewie race against pirates as they hope to find one of three droids that are the key to finding a legendary treasure. This series has a lot of heart and humor and you should definitely check it out.  I also think that since FCBD is lined up with Star Wars day comic book stores will force you to take this title.

Starburns Presents - If you are looking for a strange collection of stories that include a beer drinking Sasquatch, an alien planet called Wrestletopia, and the granddaughter of Satan himself, look no further from this title. Rated Teen, this is not recommended for all-ages, but based on previous work from Starburns it is guaranteed to entertain.

Ghost Hog - Another all-ages title that I hope to check out is this title from Joey Weiser. This series centers around the ghost of a young boar who is navigating the afterlife after being gunned down by a hunter.  Initially fueled by rage toward her killer, she quickly learns that there is a mountain demon that she must confront.