Thanks to a work trip I managed to work on my New Years Resolutions.  On my flight to the Boston area I managed to watch Aquaman and it was delightful. It was definitely a new tone that was much needed in the DC Universe. It is clear that James Wan had a lot of fun with the character and I thought that Jason Momoa was brilliant as the titular character. It invoked a lot of the tongue in cheek humor that Chris Hemsworth breathes into Thor and I look forward to watching it with the family in the near future. 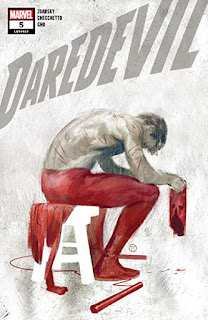 Pick of the Week:
Daredevil #5 - Daredevil has reached his breaking point and there is something incredibly humbling watching the Man without Fear struggle with his own identity. Following his skirmish with the Punisher, Matt unknowingly dons a Punisher t-shirt as he attempts a suicide mission trying to take down a gang on his own.  Whiskey is his go to pain medicine and he is in desperate need of an intervention to get him on the right track. He still is struggling to deal with his internal demons after he accidentally killed someone.  Watching him struggle with what is right and wrong and what role superheros play in the big picture paints him as someone overtly human. This introspective arc has been extremely rewarding and I am looking forward to how he can get his groove back.

The Rest:
Gideon Falls #13 - We are learning more and more about the power of the Black Barn and the entity that possessed Norton Sinclair.  The Black Barn has opened up a connection between alternate realities, and the priest is attempting to track Sinclair to kill whatever it is that has possessed him. The change in pacing in this series has really ramped up the fear factor in this series and the shift is welcomed. Jeff Lemire and Andrea Sorrentino spent the first arc building up to a climax and have delivered in a big way.

Captain America #10 - Cap remains behind bars after being framed for a crime he didn't commit. There is a certain novelty of Steve Rogers imprisoned with those he put behind bars, and the humor is not lost on the creative team of Ta-Nehsi Coates, Adam Kubert, and Frank Martin as we are treated to Steve playing poker in jail with the likes of Bane. I will admit that I don't know anything about Thunderball, but apparently he used to be a bad dude that is looking to atone. This makes him a good candidate to hatch a scheme from the inside to help bust Rogers out of jail. Unfortunately this is likely to free some other individuals as well.