ComiXology has a big announcement planned for June 1 and it is likely related to a new original comic or comics. It has been dubbed as epic and includes some prominent artists and authors. I am very curious what this announcement entails and will tune in via Twitch as it is the platform they are utilizing. Rumor is it might be related to Fortnite, but it is only a rumor. 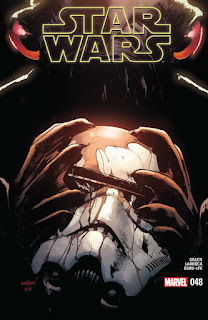 Pick of the Week:
Star Wars #48 - This arc has taught me more about the Mon Cala and given me a lot more respect for the great Admiral Ackbar and his people. The wild plan that Leia concocted finally fell apart. The king is dying and the impostor they sent to the senate had his identity blown when we learned that the Empire had already infiltrated a good portion of the Mon Cala. In a desperate attempt to salvage the mission Leia gets a recording of the king moments before he dies that should inspire the Mon Cala to join the rebellion, but the fight against the Empire is never easy. This arc has been a high point in the series and a reminder that there are so many good stories to tell in this universe.

The Rest:
Hit Girl #4 - Mark Millar delivers on the ultra-violence that has been oddly lacking in Kick-Ass, but the visual style is not my scene and I don't feel a connection to any of the characters yet. It isn't that this is a bad book by any means, it just doesn't appeal to me and I planned on dropping it until I learned that Hit Girl is venture to Canada. Joining her in Canada is Jeff Lemire and I can't wait to see what he has planned for this series.

Doctor Aphra #20 - This series took a very interesting turn as we learn about the life in prison Aphra is leading. I have really enjoyed the elaborate space prisons, and the facility Aphra is in is a group of broken space ships that are held together and towed through space. The ship that tows the floating prison uses the prisoners as mercenaries and if they fall too far behind their droid captains they explode. In this issue she starts to set the scene for her eventual escape, and it will be interesting to see how she manages that. It apparently pays to have droid connections.