Well it looks like James Gunn has broken all of our hearts once again. In a risk of writing about Infinity War spoilers, Groot's last word in the film is "dad" as he talks to Rocket. Excuse me for a minute, but I am freaking bawling my eyes out. I didn't think a film would affect me like the second Guardians film but Infinity War proved me wrong.  Ouch. 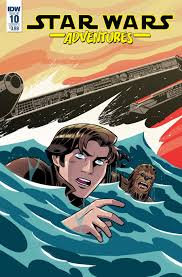 Pick of the Week:
Star Wars Adventures #10 - I may sound like a broken record, but if you are a Star Wars fan then this series is worthy of your time. This issue features a collection of stories, including a short story on a young Han Solo navigating the complicated life of smuggling. In addition we are treated to a Lando story and reminded that Star Wars is ultimately a story that resonates with generations and a story that can be shared of readers of all ages.

The Rest:
Southern Bastards #20 - Roberta spends this issue hunting coach Boss down following their last encounter.  Southern Bastards always finds a way to up the violence factor and this issue does not hold back from the co-existence of the extreme violence and high school football. This series took a more serious swing following its initial arc and it is a series that holds value to both true crime and sports fans alike.

Darth Vader #16 -  In an issue packed full of flash-backs, Charles Soule does a phenomenal job outlining some of the faults that the Jedi possess. Vader is an absolute terror in this issue and reminds us all why he is such a formidable foe.  His use of force-specific powers underwater are worth admission alone. He quickly reminds us of his brutal force and why his is truly to be feared.