I'm not sure if you've heard the big news this week, but Brian Michael Bendis signed an exclusive multi-year deal with DC.  A staple for various Marvel titles since 2000, Bendis' impact on the Marvel universe is immense. He helped lauch the MAX imprint and put Jessica Jones in the spotlight, and was one of my favorite authors for Daredevil and others. DC sales have lagged behind Marvel in recent months, so the move isn't too shocking. I feel that DC is still figuring out where to go after the New 52, Rebirth, and the issues on the big screen (Wonder Woman is the exception). Congratulations are in order for Mr. Bendis.  DC landed a great talent and I am curious to see the impact. 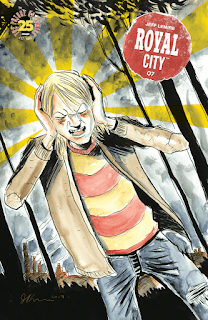 Pick of the Week:
Royal City #7 - It bears repeating, but this series hearkens back to older Jeff Lemire titles Sweet Tooth and Essex County.  Essex County even gets a nod on the first page of this issue and it brought a huge smile to my face. Lemire gives us a sneak peak back when Tommy was still living. We learn that he has some irregular patterns in his brain, and are given some hints as to why some of the other characters are currently hearing him over the radio waves. There is still a lot to unpack in this series, but it is one of the rare series where all of the characters are real and I am able to connect with each one. Lemire excels at writing parental and spousal relationships and this series reflects that. Definitely a phenomenal series that would be a good gateway book to bring in non-comic book readers. Really breaks the mold in terms of what normally graces the pages of a comic book.

The Rest:
Daredevil #595 - Kingpin has been elected Mayor and Daredevil is not too happy. One of Mayor Fisk's first tasks is to restrict the authority of the masked vigilantes roaming the streets. This is part of the Marvel Legacy series and it oozes the classic tension that exists between legal authority and superheros. Despite Murdock successfully arguing his case in front of the Supreme Court, Fisk is not backing down and is using his resources to build up cases against Daredevil and his buddies. Interesting start to a new arc and a definite throw-back that fits well with the legacy framework.

Birthright #28 - Is Joshua Williamson pulling a fast one on us? After painting a pretty one sided picture of Lore, the evil overlord who Mikey is trying to save Terrenos from, just healed his greatest foe and is shows us his vision of peace in Terrenos. This was a twist I didn't see coming and I am very interested to see how this pans out over the next two issues in this arc. It seems that there is a lot more to this story than I initially thought. It has been an up and down ride for me personally, but I definitely want to wrap up this arc before making my decision to continue the series. Very interesting development this week.