Come for the madcap gonzo writing, stay for the wrenching emotion. 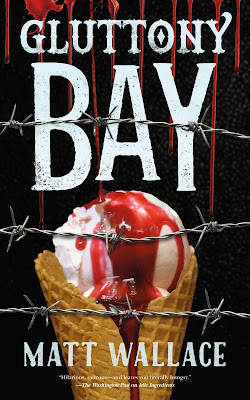 When Mariah Carey sang "Emotions" in 1991, I can only imagine that it was because someone traveled back in time and handed her a stack of Matt Wallace's Sin du Jour Affair novellas. I'm not suggesting that this is the most likely explanation for the inspiration behind her song. I just think it wouldn't be unreasonable for her to kick even one royalty check Matt's way as an acknowledgment because he definitely had me feeling emotions.

It's been clear for a couple of books now that Wallace was setting the stage for a conflict that will upend the world and lives of everyone who works at Sin du Jour.  I've been fully on board for the full Sin du Jour experience since Envy of Angels and with each book Wallace draws the reader deeper and deeper to the point that these aren't characters, they're old friends. They're old friends who are completely whacked out and perhaps slightly cracked out, they've got scars on the surface and unfathomable depths lurking underneath and we slip into their stories with ease like a well worn pair of pants.


"Mo got to be in a battle between demon clans from hell. He got to go to Hollywood and party with celebs and he was almost burned alive except three tons of vanilla frosting fell from the ceiling. A fucked-up merman puked all over him in front of dragons made of fire and a bunch of Japanese dudes made of gnomes. He met an angel. He got to meet an actual, real angel. He got to know there was more out there than anyone else ever knows."

There is no doubt that Matt Wallace will deliver an absurdly gonzo story. See the above quote that somehow perfectly encapsulates the previous five books in six sentences better than I could in six paragraphs. This is a given. It's just a question as to what seasoning he'll use as the delivery vehicle for telling a deeply emotional story that is becoming more and more personal for me the farther along in this series.

We're entering the stage where nobody is really safe and it's flat out terrifying and I found myself actively cursing at Matt Wallace several times throughout Gluttony Bay. Come for the madcap gonzo writing, stay for the wrenching emotion.

Gluttony Bay finds the Sin du Jour crew in open conflict with the powers-that-be who finance them and set up their extra-super-special catering work. Well, more specifically, Allensworth (the representative of said powers) is in conflict with Lena and Bronko because they are not falling one hundred percent in line with every one of his plans and that's not something he will tolerate for long.

As such, this is the first novella not directly centered around a catering job, though food remains a central through line, increasingly so late in the novella.

I so often focus on the absurdity Wallace threads throughout each story when talking about Sin du Jour because it's easy to point at something so epic and absurdly awesome and use that as a selling point for the novella. Early on, that was enough. But with each passing novella it is clear that Wallace's skill at storytelling is more than on point. Everything here is so tightly and perfectly plotted that it's easy to miss just how smooth of a ride Wallace is taking his readers on and how strong the craft behind all this glorious crazy is. Ultimately, Gluttony Bay (and the entire series) would't work and wouldn't resonate so strongly if Matt Wallace wasn't crushing it with everything behind the scenes.

Wallace has set up the relationships between Lena, Darren, Bronko, Ritter, Hara, Moon, Cindy, and everyone else on the line and in Shipping & Receiving so perfectly that the joys and disappointments and the raw pain are so visceral in Gluttony Bay and I can only imagine how poignant the ending of the series will be.

Gluttony Bay is a perfect representative of the Sin du Jour series, laced with razor edged humor and absurdity and filled with a delectable story that builds to something bigger and more emotional than any individual bite would have suggested. Gluttony Bay is fantastic. Gluttony Bay is wonderful.

Bonuses: +1 because there's this oracle of a  clown that could probably scare Pennywise into submission due to his method of divination.


POSTED BY: Joe Sherry - Co-editor of Nerds of a Feather, 2017 Hugo Award Finalist for Best Fanzine. Writer / Editor of the mostly defunct Adventures in Reading since 2004. Minnesotan.