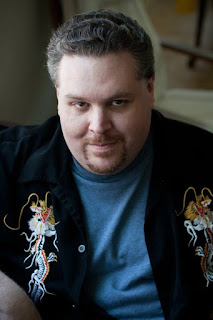 Matt Wallace is the author of The Next Fix, The Failed Cities, the novella series Slingers, a lucha-libre buddy-cop novella called Rencor: Life in Grudge City, and the absurdly good Sin du Jour novella series from Tor.com Publishing.

I'm in the middle of The Stars Are Legion by Kameron Hurley, which I already think is her best work to-date. It's exciting as hell watching an author fully become themselves in a novel, and that's what Legion is to me. I adore Hurley's Bel Dame Apocrypha series and her Worldbreaker Saga, and she did a lot of striking and original stuff with both, but they're still anchored in the familiar waters of their genres. Legion reads like the next level of all of that, Hurley writing exactly who and how and what she wants to write without any concern for what's come before in the field. It feels free and new and horrifying and I fucking love it.

Tor.com just announced Brooke Bolander's first book, The Only Harmless Great Thing. I'm super stoked for that. I think Brooke is one of the freshest and most unique voices out there right now, but she produces at a very slow pace (a lot of great writers did and do). Every story is a straight-up iconoclastic gem, but you're immediately like, "MORE!" So a whole book of hers, even if it's a short one, is like discovering gold. I can't wait. I'm also eager to read River of Teeth by Sarah Gailey, who is another author coming at SFF like a coked-up spider monkey from angles you've never seen before. The next novella in Cassandra Khaw's Persons Non Grata series, A Song for Quiet. The first novella, Hammers on Bone, was one of my favorites last year. Null States, the sequel to Malka Older's Infomocracy, which I thought was one of the best and smartest novels of 2016. There's just so much amazing shit out there right now in SFF. We should all be making so much more money than we do.

I kind of want to reread Our Town, which is obviously a play, but who the hell has time to go to an actual physical theater. But I've been thinking a lot lately about being present. Time just seems to evaporate. My fiancée and I are both so busy with our careers and what free time we have is spent thinking about and planning for the future that we really have to work to be in the moment and enjoy and experience what's happening right now. And being present is obviously one of the big themes in Our Town. I've also always found something wonderfully sinister about the Stage Manager. I end up writing a lot of weird fanfic about him in my head.

When I was a young punk dreaming of becoming a screenwriter I read William Goldman's Adventures in the Screen Trade books religiously. I thought he was the guy that had it all figured out and the screenwriter I wanted to be (after all, he's responsible for one of the definitive statements about the movie business, "Nobody knows nothin'."). When I got older, started actually working in the entertainment industry, and became a little more aware, I reread Goldman's books and realized that while he is clearly a very nice, extremely talented guy, he's also, professionally, an incredibly timid, even cowardly star-fucker and not at all who I want to be. I'm much more a Devil's Guide to Hollywood by Joe Eszterhas screenwriter now. It's also still one of my favorite all-time novels, but Dune has not aged well. Both its style and a lot of its tropes have become bracingly difficult for me. But it's still an epic novel in which the political, economical, ecological, and spiritual fate of the entire known Universe is decided in a knife fight. I mean, c'mon.

I read Lost Souls by Billy Martin (writing then as Poppy Z. Brite) when I was 13 or 14 and it completely changed my perception of prose writing. I wanted to create sights, sounds, and smells that practically dripped off the page the way he did. I wanted to describe my worlds with the same kind of vivid language. And the characters and their relationships just broke my fucking heart. I think I grew up a lot, as a person and as a writer, when I read that book.

My latest is Idle Ingredients. It's the fourth book in my Sin du Jour novella series about a catering company in Long Island City that plans and executes events for the world of the supernatural co-existing with our own. It's funny, foodie, and fucked up, full of chefs and mercenaries and magic and monsters. Each book is named for and shot through with the theme of a deadly sin, and each story centers around an event the crew is hired to cater. The first book, Envy of Angels, had them tasked with preparing an angel for a demon banquet and having to scramble to avoid killing and serving said angel. The second book saw them planning a royal Goblin wedding that goes horribly awry. There's also a big overarching plot that unfolds throughout the series in true serial fashion that changes all of their lives and the company forever. I'm really proud of the series and I'm really lovin' writing it. We've got three more books coming after Idle Ingredients (seven deadly sins, seven books). The next one, Greedy Pigs, which is probably the most timely and topical of the series, drops May 16th.