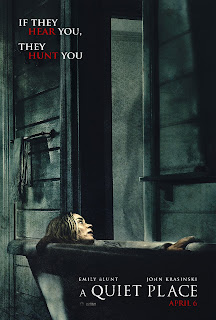 What are the sounds of our daily existences? The phones ringing, our laughs, the music we listen to, steam from espresso machines, cars, the slam of doors—all these things that we learn to either block out or give into. What is the world like without them? What if sound is the enemy—one noise too loud and you’ll literally be hunted down by a horrific monster. How does one survive in such a world? In A Quiet Place, we see this vision come into reality.

The film, extremely well directed by star John Krasinski (whose previous directing credits gave no hint as to his ability to handle horror and tension so well), follows one family’s existence in this new world—as they have an exceptionally bad day. In a world where any sound above the slightest of bare feet shuffling acts as a homing beacon for large predatory monsters, this family has somehow survived—thanks to their carefulness (such as painting paths across floors to avoid any boards that might squeak and spreading sand on walking paths) and the ability to use sign language to communicate. The family consists of Krasinski, Emily Blunt, Noah Jupe, and Millicent Simmonds. While the whole cast is excellent, both Blunt and Simmonds (who is deaf in real life) are exceptionally good.

What immediately stands out about the film is its extraordinary use of sound. The majority of the dialogue is in ASL and every sound that happens on screen is so carefully orchestrated that it feels engulfing. Rarely have I been so tense in a movie simply from imagining sounds that might be made by the objects that Krasinski makes sure to have the camera linger on just a beat longer than we would expect.

That technique leads to another quality to bring up—the extremely well built suspense in the film. It’s tense af in the best possible way. Every time I expected a sound, my whole body would flinch—this isn’t a film that solely provides tension through cheap jump scares, all of them felt earned to help build up the absolute terror the family would feel living like this.

And that tension and question-- how would you live in a world like this and would you want to—is one that hovers over the whole film. Blunt and Krasinski play parents determined to keep their children safe and have somehow created a life that can still contain moments of happiness and light. There’s something deeply hopeful about this film—that survival can go beyond merely surviving, that grief doesn’t have to consume us.

Bonuses: +1 for the sound design, +1 for the excellent use of anticipation and expectation to build suspense

Penalties: -1 for some logical inconsistencies

POSTED BY: Chloe, speculative fiction fan in all forms, monster theorist, and Nerds of a Feather blogger since 2016. Find her on Twitter @PintsNCupcakes
Posted by Chloe N. Clark at 12:00:00 AM