If you want to name great things about Westworld, you can start pretty much anywhere. The writing, acting, plot, set design... the list goes on and on. It is rich with small details, the kind of details which are more rewarding with repeat viewings- a feat, in and of itself, given the cyclical nature of the timeline within Westworld itself. And the best detail is one we see quickly, and often, and likely, never even notice it.

The first time we see it is in the main titles, the skeleton playing the piano. But in the course the titles, we are informed by that very instrument of what is in store, as the fingers lift off the keys, yet the keys play on. The player piano is an easily overlooked detail, yet it shows up at some of the most important moments in the entire series. 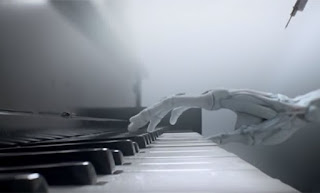 NOTE: from here on out, I assume you have watched all of Westworld. There will be no restraint on spoilers. You have been warned.

Player pianos are the sort of relic which belong in a place like Westworld - their use is limited, serving no real function outside of that era. You and I don't need to pretend to play the piano to impress guests in our age, and the Victorians would have actually known how, so its niche existed in that slice of history where someone could sit there and look like they were playing. A place like, say, an old west brothel.

This is where we find the player piano within Westworld, plinking away amidst the mayhem of tourists wreaking havoc. It's drawn some notoriety for the songs it plays- covers of No Surprises (Radiohead) and Black Hole Sun (Soundgarden), relevant to the show, certainly, but hardly adding immense amounts of gravitas to the show itself.

What does, however, is how they are played- or, rather, not played, since that is the whole point of the piano. Aside from the main titles, we don't see it played by anyone. We see the cylinder, turning, playing the notes it is programmed to play. And when- when- we see it is what really matters.

The first two times in the first episode- "The Original" we enter Mariposa's, we don't even see the piano. But later, as something is off with Maeve, we see the cylinder before she comes downstairs. In E02 "Chestnut", we see more, the cylinder, and the keys being depressed all by themselves. We pan out as Maeve says "You can hear it, can't you?" No Surprises here, by itself, would be something. But the phantom keys, Maeve's cryptic words, and the fact that the surprises have only begun makes it all the more significant. 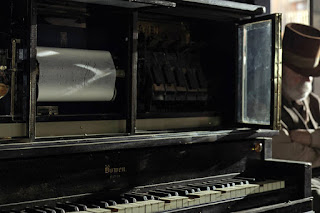 In 04, "Dissonance Theory" we get a slow pan across the working of the still unattended piano before cutting to Maeve, lost in thought. This was the point in the show it really grabbed me, because the point of a player piano is for someone to sit at it, work a pedal, and look like they are playing- not for it to be unattended, with no one playing it.

They are there to appear as if they are real- have real reactions, but they aren't. They gloss over references to the 'real' world, trips, visitors, and the like. Just like the piano, they are programmed. But someone has to pump the pedal.

Until the hosts begin to play themselves, as the piano has all along.

For all the brilliance in this show, the small cues it gives us, like the piano, are my favorite. In 05, "Contrapasso", when the Man in Black and Ford meet, Ford simply snaps his fingers and the piano starts playing, showing he is still in total control of the situation. Throughout the series, we see more of the piano the more the hosts learn. We hear it up close in 08, "Trace Decay", hear the poor quality of the dingy piano.

There is also, significantly, one in Ford's office- always with a host seated at it, ostensibly playing it. But, of course, he isn't. Or perhaps, he actually is, but is programmed to do so. We see this in 03, "The Stray". This time, the piece is on the nose- "Reverie" by Claude Debussy, the significance of which is impossible to miss. But we hear a string version in 06 as Bernard remembers his son- a true reverie. We finally hear a full piano version in the finale, behind Delores' narration, as we witness her creation.

And then we hear it, finally, as Arnold kills himself, playing over a gramophone this time, telling us it was Charlie's favorite, and repeats yet another phrase we have heard before- "these violent delights have violent ends". It sums up the show in so many ways, beyond the base violence which is its facade. Westworld is a story about storytelling about stories- that is a hard story to tell, and tell well. It adds another layer of difficulty, by that very cyclical nature, cylinders being used in the aforementioned player pianos. The same day is played over and over, with only sensitive to initial conditions (or more commonly, 'the butterfly effect') to change what happens. This means we see and hear the same thing over and over again. But Westworld embraces that challenge, that restriction, and uses it to its advantage, because we don't just see and hear the same things over and over again in the park, we hear phrases repeated outside it, about it, about the hosts and about humans. Their violent delights do indeed have violent ends.

The piano doesn't murder the player if it doesn't like the music, as Ford says. Season 2 - perhaps - will reveal if the hosts can change the tune, or if they continue being played - even if no one is sitting before the keys.