Westworld Wednesday: The Devils are Here

Welcome to Westworld Wednesday, your one and only source for me rambling about Westworld! I don't have a format, exactly, in mind for this - it's not a recap, because, well, watch the damn show. It's more of a discussion piece. Westworld is certainly my favorite show on TV right now, because it's so much more than the sum of its parts. And oh, what parts does it have. Let's jump in. 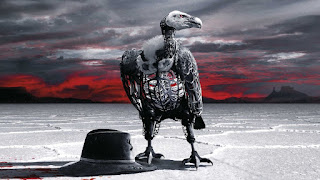 But the fearful, and unbelieving, and the abominable, and murderers, and whoremongers, and sorcerers, and idolaters, and all liars, shall have their part in the lake which burneth with fire and brimstone: which is the second death. -Revelation 21:8, KJV

We pick up right where Season 1 left off, with lots of violence and cryptic messages. My biggest question coming into this season was how they would keep the tension up, not just the omnipresent threat of violence that is the hallmark of so many HBO shows, but the mystery and disorienting time jumps.

Turns out, pretty well. If you watch a show about what Disneyland would be like with robots, sex and homicide, you sort of ask... why? How does this place stay in business? And why on earth would you use robots that can pass for human for... that? Season one did an outstanding job of tying up a lot of loose ends, while setting the stage for a robot uprising, and I am very impressed that they decided to nosedive into much deeper questions.

The first season spends a lot of time asking what it means, exactly, to be human, or sentient, anyway. It's a fascinating topic, and Westworld (for my money, anyway) does this better than nearly anything out there. Frankenstein does it best, of course, the original and the best, and that examination lies at the heart of so much science fiction.

But it's very hard to examine what it means to be human without examining what it means to be god, lowercase g. But there is always a price for tampering with capital G God's domain, if such a thing exists. Shades of Jurassic Park show up, the question of could and should, and one has to wonder if capital G God asked such things, if indeed he exists.


Interestingly, some of the hosts do believe in god, or God, but in either case, he is a fiction programmed in to them, as old William explains to his old friend(?) Lawrence. Meanwhile, Delores has taken it upon herself to introduce her Lancelot, Teddy, to their true Gods - or, at least, creators after, as she states, she killed God.

His reaction is rather similar to my own experiences with religion, but that's neither here nor there. What is relevant is that he is less than impressed with the reality - that what gods may be are not superior to him, physically or morally. In fact, in many cases, quite the opposite.

But Delores wages a crusade to purge and punish the gods for their many failings, while William seeks penance? Absolution? But it comes not from a higher power, but from his own creation. He is not the creator of the hosts themselves - those are sins Arnold and Robert have already paid for - but he is the one who made the park what it is, gave it purpose and meaning beyond simple indulgence of vice. So many questions are asked - what does it mean to be human? What does it mean to be god? The heart of this season lies at how we use whatever agency we have, and who we are as people, whatever form that may take. One thing is abundantly clear in the early going, though - there are truly no gods in Westworld.