Lara Elena Donnelly is the author of the vintage-glam spy thriller Amberlough and it’s forthcoming sequels Armistice and Amnesty (Tor). Lara’s other work has appeared in venues including Strange Horizons, Escape Pod, Nightmare, and Uncanny.

Right now I’m reading The Sky Is Yours, by Chandler Klang Smith. It’s weird and gorgeous and depraved, and unlike much other fantasy I’ve encountered. It reminds me a little of David Edison’s The Waking Engine. I heard her read from it at the KGB Fantastic Fiction series in March, opposite Kelly Robson. There was a blizzard that day, so the book vendor hadn’t been able to make it to the reading. She had two of her own author copies to sell, and you’d better believe I bought one immediately.

I’m also reading The Bone Clocks, finally. I’ve read my David Mitchell all out of order. But wow, that man can make stories.

I’m really excited for L.X. Beckett’s as-yet-unpublished novel, set in the same world as their upcoming novella “Freezing Rain, a Chance of Falling,” forthcoming from Fantasy & Science Fiction magazine. I got to beta-read it, and it’s a wonderful sci-fi solarpunkish thriller about politics, virtual reality, the singularity, and bouncing back from climate change that also deals very frankly but tenderly with trauma and mental illness.

I’m also looking forward to Blackfish City by Sam J. Miller and Social Creature by Tara Isabella Burton. Tara is one of those writers who moves between genres and styles with breathtaking ease; she’s painfully intelligent, but also glamorous, over the top, and delightfully bonkers, so I imagine her book will be all of these things and more. And with Sam, I know anything he writes is going to be heartbreaking, brutal, and totally original.

I read The Goldfinch by Donna Tartt last summer, and it was so huge and I tore through it so fast, I’m sure there’s a lot of gorgeous, painful stuff I missed. The plot grabbed me so hard and roared along at such a pace, I didn’t have as much time as I might have liked to appreciate the prose and characterization. I’d also like to reread Wolf Hall, because wow. Just wow. Let me bask in that genius again.

When I first tried to read Claire Messud’s The Emperor’s Children, I got about two chapters in, and I kept thinking, “I should like this book, but it is just not clicking with me.”

That was while I was living in Louisville, Kentucky, and in my early twenties. I tried it again once I’d moved to New York, had my heart broken, and landed pretty firmly in my late twenties (looking back at that sentence, it makes my life sound like a terrible literary cliché). Since The Emperor’s Children is a book about late-twenties, early-thirty somethings trying to claw their way through the difficulty that is New York, struggling with friendships and relationships that aren’t what they seemed on the surface, all of the sudden something in it clicked with me and I devoured the book in three days. 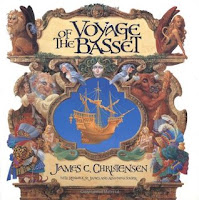 The Voyage of the Basset, by James C. Christensen, Alan Dean Foster, and Renwick St. James, in which a Victorian professor and his daughters take a sea voyage perpendicular to Darwin’s trip on the Beagle, delving not into hard science but into myth, magic, and the imagination. As a kid I was obsessed with mythologies of all types, and also entranced by Christensen’s opulent, richly-detailed paintings. As an adult, the deeper metaphors of the story have stuck with me. I have a tattoo now, in Christensen’s handwriting, of the Basset’s motto: Credendo Vides, which means “By Believing, One Sees.”

Armistice, the second book in the Amberlough Dossier, is packed full of twisted, tangled relationships. Sure, there are glamorous film shoots, clandestine meetings, and international arms deals aplenty, but the characters, and how they relate to one another, are my favorite part of this book. There’s a diplomat who’s illegitimate son is being held as collateral. There’s her ex-lover, the father of her child, struggling against the dictates of a society that has thwarted every one of his desires. There are people struggling with grief, anger, fear, and guilt. It’s a book about what happens once you’ve failed, and the strength it takes to try again.