Despite its flaws, this is still a satisfying close to an unusual and exciting trilogy. 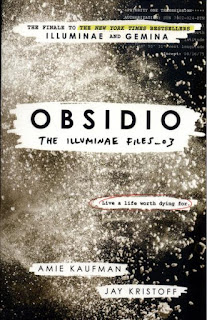 She’s a sharp, plucky, well-connected prodigy. He’s a hot, edgy outsider with a heart of gold. Together, they have chemistry, but their own history is keeping them apart. Will they end up together at the end of the book, and, on a related note, can they stop the constant stream of mass murdering invasions, spaceship malfunctions, alien horrors, terrible AI decisions and reality-destroying spatial anomalies which threaten the survival of everyone they know? The Illuminae Files – of which Obsidio is the third and final volume – delivers a highly satisfying response to these questions, blending teen romance with a tense, fast paced narrative that doesn’t let up until the very end.

The conceit of the Illuminae Files is the documentation of a corporate war in a remote corner of space by the mysterious “Illuminae Group”, which has collected everything from chat logs to ship specifications to images of company noticeboard in order to put together the story of BeiTech’s invasion of Kerenza Colony. Three spaceships of refugees flee Kerenza in Illuminae, heading for the Heimdall jump gate which represents their best chance of escape. A mysterious neurological plague and the increasingly unpredictable actions of the onboard AI turn that journey into a tense bloodbath, which can only be halted if Kady and Ezra get over (i.e. reverse) their recent breakup and use their teen prodigy skills to save the day. In Gemina, we discover Heimdall is having problems of its own, and its up to captain’s daughter Hanna, her drug dealer Nik, and his disabled hacker cousin Ella to save the day before Hypatia’s arrival. Death, destruction, double-crossings and formulaic but compelling heterosexual romance ensues.

Obsidio introduces yet another two teen heroes: Asha Grant, a survivor of BeiTech’s invasion who now works in the colony’s clinic while secretly working for the resistance; and Rhys Lindstrom, a BeiTech electronics specialist who has been newly sent to support the ground fleet and is (of course!) Asha’s ex-boyfriend from her pre-Kerenza days. Unlike the heroes of the first two books, Asha and Rhys have to share their entire narrative with scenes from the Mao, the ship carrying the survivors from the refugee fleet and representatives from Heimdall back to their absolute last hope on Kerenza. Mao's crew are struggling with their chain of command and the technological strain of transporting thousands of people the ship wasn’t designed for, and the ship is also home to our returning heroes from the first two books, who are key players in the events that follow.

Whether by accident or design, events on the Mao end up completely overshadowing the storyline on Kerenza, and Asha and Rhys are by far the least interesting leads; if you don’t care about their rekindling romance (which I didn’t), the Kerenza scenes serve little purpose beyond adding a deadline to Mao’s return and reinforcing BeiTech’s brutality still further. I suspect Kaufman and Kristoff could have completely redrafted this book to focus solely on the Mao with minimal impact on the overall plot, and it feels contrived to have yet another pair of heterosexual teenagers rehash a very similar dynamic to Kady and Ezra's in Illuminae. Romance is an integral part of this trilogy, but Asha and Rhys took the formula a step too far.

On the other hand, the returning heroes continue to be great fun. I would describe the Illuminae Files as YA competence porn, where realism matters less than wish fulfilment, and the characters are precocious, wisecracking archetypes. The neo-epistolary format is highly effective at conveying this: we go from characters effortlessly riffing off each other’s’ jokes in chat to reading transcribed security camera footage of them crawling through air ducts and saving the day, interspersed with frantic e-mails from adults wondering what to do about the hyper-competent, charismatic meddling kids screwing up their plans. The visuals get particularly interesting in sequences narrated by AIDAN, the aforementioned insane AI of the first book, whose text is presented in white-on-black pages with formatting that occasionally shifts into swirls and spirals representing the movement of the spaceships and characters he is describing.

AIDAN gets a fair bit of screentime again in Obsidio, with much of it alongside my favourite character, initially introduced in Gemina: Ella Malikova, daughter of Russian gangsters, unstoppable hacker and the sharpest wit on Mao. It is unfortunate that Ella – who is disabled following a childhood illness – is the only main character to have no love interest or romantic subplot. Although I didn’t personally miss it, it sends a poor message in a series where romance is otherwise so prominent that the only disabled character is also the only character where the authors chose not to explore that aspect. Even AIDAN falls in love...

Perhaps because its scope is wider than the first two volumes, I found Obsidio less effective at building tension and selling me on some of the plot’s big twists, especially towards the end where fake-outs in a few of the sub-plots end up diffusing the tension in rather anticlimactic ways. While all three books have occasionally pulled their punches to give their heroes a fighting chance against overwhelming odds, these moments felt more frustrating in Obsidio; perhaps because the twist in Gemina was so left field and inventive that the rather more mundane deux ex machinae here feel more like cop-outs, especially when compared to the even more fatalistic tone and scale this book is trying to develop.

It's always a bit sad when a closing volume doesn't reach the heights of its predecessors. We want our finales to represent the absolute best of a series, and several aspects of Obsidio - not least its lacklustre new characters - fall short in that regard. Despite its flaws, however, this is still a satisfying close to an unusual and exciting trilogy, and it certainly doesn't prevent me from recommending the series as a whole.

Bonuses: +1 My inner teenager wishes I were this cool, +1 all AIs should speak in spirals from now on.

Penalties: -1 Uninspiring new characters who add nothing to the overall plot.

POSTED BY: Adri is a semi-aquatic migratory mammal most often found in the UK. She has many opinions about SFF books, and is also partial to gaming, baking, interacting with dogs, and Asian style karaoke.