Microreview [book]: The Lady of the Lake by Andrzej Sapkowski

All great things must come to an end. 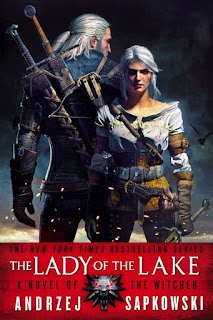 I've agonized over how to write this review, of the final chapter in a fantasy series that I can say without hesitation is the best I've ever read. To be frank, I'm not even sure I could adequately summarize the plot--not without giving something away that's best left to the joy of discovery. But here goes nothing.

The Lady of the Lake is the fifth and final volume in The Witcher Cycle, a series first published in Polish and then translated into Spanish, French, Russian, etc. Though an international sensation, English readers are getting it late. The only reason we are getting it at all is because CD Project Red adapted the series into a successful game franchise.* As they say, though, better late than never.

The book begins with Geralt on the trail of his erstwhile protege Ciri, the prophesied "destroyer of worlds." She is also being pursued by agents of the Nilfgaardian Empire, who seek to marry her off to the Emperor; renegade sorcerer Vilgefortz and his henchman, Bonhart, who seek to harness her power for their own nefarious ends; and the Lodge of Sorceresses, who seek to restore a balance of power between the Empire and the Northern kingdoms (presently in the midst of a cataclysmic war). Ciri enters the Tower of the Swallow and promptly disappears...

...and ends up in an Elven dimension that exists in parallel not only to the Witcher's world, but also to our own. The elves have their own designs on Ciri, namely, to give birth to the child that will restore elven greatness. She escapes, with the help of interdimensional telepathic unicorns, who help Ciri discover that her true gift is, essentially, the power to melt spacetime.

Yes, you read all that correctly.

Once back in the real world (not ours, but the Witcher's), the main actors in this drama begin to converge on Stygga Castle, where Vilgefortz holds both Ciri and Yennefer captive. As this unfolds, the Imperial and Northern armies meet in a battle so intense and bloody that it makes the Blackwater look like a back alley slap fight. I'd say more, but you really should just read the damned thing.

The Lady of the Lake is an immensely gratifying yet deeply unnerving conclusion to the series. There are moments when it is touching, romantic, funny and just plain fun. At others, it is unbearably sad and utterly terrifying. It is a deeply political book, as I've discussed earlier. Sapkowski deconstructs the archetypes of good and evil that Tolkein modeled for the genre, but without resort to the tired "everyone is terrible" canard. Racism plays a central role in the narrative, as does misogyny. In both cases, it feels like Sapkowski is way ahead of the curve for 2017; then you remember that these books were written 15 years ago.

Another appealing element of the book, and the series, is the moral ambiguity of its powerholders. Nilfgaard is an oppressive, autocratic and megalomaniacal power; yet the Northern kingdoms--which would be coded as "Western" (and thus "good") in traditional fantasy, are monstrously violent and cruel places, where nonhumans are forced to live in ghettoes where they are defenseless against pogroms and other, more mundane indignities. Meanwhile, the Elven Scoia'tael, who resist by force of arms, are straight-up terrorists who seemingly take joy from violence against defenseless civilians. Does this dynamic sound familiar? It sure does to me.

Sapkowski clearly draws from the darker side of Polish and European history, using his fantasy setting to explore various aspects of human behavior (sociological, psychological, etc.) in a strikingly sophisticated manner. Like I said, this is a smart book.

The Lady of the Lake is not, however, the kind of monotonically grim fantasy that has proliferated over the past decade. There is goodness in the world, as well as in all but the very worst actors in this drama. And people surprise you--just when you think you've got things figured out, someone does something unexpected. It may be an unexpected kindness from a character who has hitherto appeared cold and calculating; or someone Geralt or Ciri came to trust demonstrates why trust, in this world, should be conferred selectively.

The overarching theory, then, isn't that the world that is inherently dark and foreboding, and human nature irredeemable in the face of naked self-interest. Rather, it is of corruption by ignorance, jealousy and the pursuit of power, and redemption through personal bonds of friendship, love and loyalty. These are timeless concepts, and by no means original to the series; yet they are striking nonetheless, by virtue of their flawless execution, and the degree to which we come to care about what happens to Geralt, Ciri, Yennefer and the others.

The Lady of the Lake is also stylistically daring. As in The Tower of the Swallow, narratives are often fragmented across several timelines and character perspectives. However, it works better this time. The epic Battle of Brenna shifts between the perspectives of various combatants, and the doctor running a field hospital in its midst. Throughout Sapkowski intersperses vignettes, often centered on peripheral characters, which themselves may link back to events occurring elsewhere. Keeping everything straight can be a challenge, but when the book concludes, the payoff is considerable.

The book ends on a curious note, which I will not mention. But suffice to say it raises as many questions as it provides answers. I have my theories, but will have to read the cycle again in order to see how they are borne out.

I could go on, but in the interests of brevity, let me just say this: The Lady of the Lake is, without any doubt, the best and most profound fantasy novel I have ever read. It is hard to put down, yet also a challenging and deeply rewarding book. And it is genuinely moving. I have never read a fantasy series like this, and suspect I never will again.

*Note: the games have a different plot from the books. It has been suggested that they are a sequel to or alternate version of the Saga, though Sapkowski says this is not possible.

Bonuses: None. You can't top perfection.

***
POSTED BY: The G--purveyor of nerdliness, genre fanatic and Nerds of a Feather founder/administrator, since 2012.