A stunning science fiction novel of family, choices, and a quarantined planet 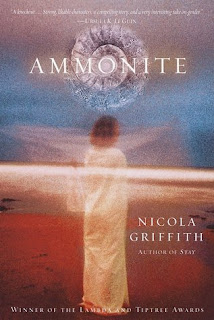 The incidence of infection of Company personnel was one hundred percent. Eighty percent of Company’s female personnel recovered; all of the men, including Courtivron, died. The planet was closed; no one on, very few off.

Welcome to Jeep, the setting of Nicola Griffith’s debut novel Ammonite. The opening pages give a sense of claustrophobia as Marghe Taishan, in a quarantined part of a station orbiting Jeep, readies herself to be inoculated with a vaccine against the virus. Marghe is an anthropologist working for the Settlement and Education Council of the Durallium Company. Her contract is to travel to Grenchstom’s Planet and “study over a million people who had been out of contact with humanity for two or three hundred years” (pg 6). Jeep was a former colony planet, but the virus closed the world and the people of Jeep are now unknown quantities to the Company. The Company, perhaps as any company would, sent Marghe as a test subject for the vaccine and probably to find what Jeep can be worth to the Company. Marghe is there for the opportunity as an anthropologist. She carries some emotional baggage with her relating to her previous stint working for the Company. Nicola Griffith explores Marghe’s history as a natural part of the storytelling of Ammonite, and manages it without infodumping the reader.

Now, it would be perhaps an attempt to avoid the elephant in the room if I didn’t bring up the fact that this is a novel featuring a planet populated entirely by women – and moreover, that all female population manages to reproduce without males, and further – that all men die from some strange virus on the planet.

It is only after the fact that we realize just what it is that Nicola Griffith did here. She twisted a number of conventions of science fiction and she did it so skillfully that if you don’t look closely, you might have missed the mechanism because you were caught up in the show. This “sort” of novel of discovery and exploration tends to be male focused and male dominated and here, the women are not simply men with female names. They are women. The idea of the all-female society doesn’t look like the various cultures and tribes of Ammonite because the idea of the all-female society is a broken cliché that doesn’t treat women as actual people. Griffith gets at this in the essay that follows the novel. If you think this was all some great accident that Griffith just happened to write into the novel, think again. This was intentional and it was skillful and it was seamless with the actual storytelling.

We will feed you, and clothe you, share everything that’s ours with you, without reservation, without condition. You in your turn must do the same. Will you do that?

As much as it is about anything else, Ammonite is a novel that questions what family and identity really means. To Griffith, or more accurately – as presented in Ammonite, family is about what is chosen and what the responsibilities and consequences of that choice are. Most novels don’t really get at this in such a clear way. There are families, and sometimes characters get to choose a family, but seldom does what that acceptance of family means come across so succinctly. Sometimes it takes different cultural norms to spell it out and have it not feel like a lesson. Taken out of context, the above passage is a good explanation of what a family is. Taken in the context of Ammonite, it is a beautiful and powerful moment.

You know those books you finish reading and you know you must read everything else the author has written? Ammonite is that book.

This review was originally published on June 9, 2009 at Adventures in Reading.