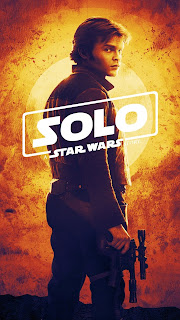 Han Solo. Smuggler. Scoundrel. Hero. Rogue. You know him; odds are you love him. If you don't, you... probably have never watched Star Wars. Harrison Ford's portrayal of the character that is, arguably, the heartbeat of the franchise is incomparable and nearly unparalleled.

Which raises the question of why this movie exists.

I'll be honest with you: I don't know. I mean, I do know, and that is because Disney bought Star Wars for FOUR BILLION dollars, which sounds like a lot of money until you realize it is A WHOLE LOT OF MONEY, and Solo is a bankable name, so here we are.

For those reasons, among several others, my expectations for this movie were... I had a whole metaphor here, involving corpses and actions generally deemed unfit for polite society, and this is nothing if not a classy establishment, so I'm going with the "so low" pun. I expected absolutely nothing.

The good news: it doesn't suck! I mean, there's some forgettable stuff, and Han Solo isn't, like, Han Solo, but if you're willing to watch it for the sake of itself and not expect Harrison Ford, it's fine. It tries a little too hard for quips, and his against-odds/I-don't-actually-have-a-plan moments come across a little forced, but, again, we're measuring this against complete disaster, so I'll take it.

What is apropos, however, is the fact that Han is/was a supporting character, and it's the supporting characters that steal the show here. The hilarious droid that is apparently now the staple of Star Wars movies is there, Woody Harrelson and Thandie Newton are predictably fantastic, but let's talk about Donald Glover. My god. He is a very recognizable actor, in a very recognizable role, and he straight up disappears. He drips with charm and oozes charisma, and may be the best casting since Heath Ledger in The Dark Knight. I literally don't have enough to say about how great he was.

Other things I liked: not killing the girl off, the cameo was earned if you watched Clone Wars/Rebels, although if not, it may have been lost on you. (POSSIBLE SPOILER ALERT) when the inevitable betrayal happens, set up by a line that was in the trailer, it pays off via other lines, and also feels earned, instead of formulaic and boring.

Overall, was it a great movie? Probably not. But it was fun, tense (in spite of the fact that you knew who was never in mortal peril), clever and entertaining. Overall, a decent addition to the Star Wars universe.

PS to griping fanboys- Did you watch the prequels? The HOLIDAY SPECIALS? For crying out loud, EVERYTHING we have now is solid gold. Get over yourselves and the fact that girls are in movies now and enjoy things for what they are, or get the hell out of my fandom.

-1 for (I forgot to mention this earlier) not picking what it wanted to be. Gangster movie? Smuggler movie? Action movie? I feel like it would have been better with a more solid heading.

Overall: 7/10: an enjoyable experience, but not without its flaws - yeah, that feels right

Dean is the author of the 3024AD series of science fiction stories. You can read his other ramblings and musings on a variety of topics (mostly writing) on his blog. When not holed up in his office  writing, he can be found watching or playing sports, or in his natural habitat of a bookstore.