It might just be me, but it feels like 2018 is really flying by and I am getting closer and closer to sharing San Diego Comic Con with my son.  My son, who will be nearly 11, will join me this year and we are starting to plan our trip and I can't wait to experience and cover this event with him in tow. We have started discussing creators he would like to meet (Jeff Smith) and figuring out what type of panel works for someone his age. Should be an interesting and educational experience. 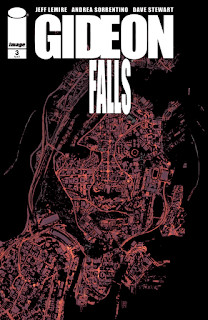 Pick of the Week:
Gideon Falls #3 - The mystery of the Black Barn is starting to come together, but a lot of questions remain. Thanks to DNA evidence, Father Fred is now cleared of the murder charges he faced, but has to reconcile the fact that it looks like the priest he is replacing is the guilty party. Meanwhile, Norton becomes more paranoid as it appears as if someone has stolen evidence from his apartment. Dr. Xu, recovering from her experience with the Black Barn, confides in Norton and isn't sure what to do moving forward. There are clearly supernatural elements at plan and the connection between Father Fred and what Norton and Dr. Xu are experiencing at the end of this issue leads me to believe that there is a whole lot more to Gideon Falls than meets the eye. Jeff Lemire paints a supernatural picture wrapped in mystery that has been an absolute delight to pour through.

The Rest:
Ether: The Copper Golems #1 - Boone Dias is returning to the Ether in an exciting development from Matt Kindt. Dias is sprung from prison with a mission of stopping the Copper Golems who is punching holes into Earth's dimensions. In a stunning twist, the agent briefing him is his daughter who he long abandoned in his first ventures into the Ether. It will be interesting to see the role Dias' family plays in this series, which starts with a jail break and some pretty cool magic. Artist David Ruben really knocks it out of the park with his illustrations in the Ether in this trippy book that has me delighted to return to this world.

Kick-Ass #4 - I did not expect Patience to figure out a way to escape from the trap she was in, but explosive balloons is something I never have experienced. The violence in this issue takes it up and the readers are treated to an action scene straight out of a John Woo film. I was impressed with the cover Patience came up with, but her actions impacted family members in a way that really drives home the heart of this series.