Microreview [book]: Down Among the Dead, by K.B. Wagers

K.B. Wagers Down Among the Dead, second in her Farian War series, puts her main character of Hail Bristol, Empress of Indrana, through hell and beyond as a civil war in an alien race leads to her capture, and to some very dark places. 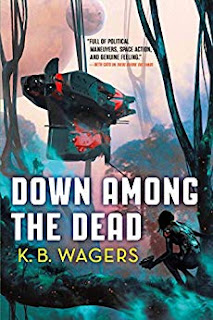 K.B. Wagers first book in her Farian War series, There Before the Chaos, was a change of pace from the previous Indranan War series, by trading a lot of the action-adventure of the first series for a book that was a lot more focused on politics, political maneuvering and concerns of galactic polities. It took the Gunrunner turned Empress who is used to deal with things in a direct fashion and put her in an unfamiliar political environment where she was pushed into an unfamiliar and role not only for the character but for the series as a whole.

In Down Among the Dead, we follow right on from the catastrophic finale of the first book. Hail and several of her companions have been captured, and many others, including her closest companion, her bodyguard (Ekam), Emmory, have apparently been killed. Wracked by guilt at this horror, and her own captivity, Down Among the Dead follows her mental descent, even as her remaining companions plot an escape from the Farian faction that holds them, and has plans for them. However, even wracked, and under mental strain, underestimating the Star of Indrana, and those who would fight for her, is never a wise policy.

If the first book, as mentioned, is Political Thriller, book two in the Farian War series continues to do something different, and it is a Prisoner of War novel, with a strong helping of psychological delving and strain on its protagonist. Hail is broken down, on a number of levels during her captivity, even as her captors have a Plan for her and her future that she might actually agree with--if they hadn’t murdered a bunch of her people and held her captive for the first place. Wagers explores Stockholm Syndrome, Survivor Guilt, and even darker ideas like Self Harm and psychosis come up in the plot, and Wagers is willing to go there and do horrible things to her character, and plunge the reader into a fracturing mind. The title is stunningly apt, and shows where Hail is, mentally, in this novel.

The book, being an unnerving and challenging and sometimes unpleasant book for me to read, second in a series, does have some challenges for a reader to tackle. There are some middle book syndrome issues with the book, with a relatively narrow focus on an environment and a headspace that for its unpleasantness is rather challenging to spend time in, any way, shape or form. It’s a challenging scenario--the author is trying their best to show what the experience of capture and being convinced that many who she cares about are dead breaks the character of Hail Bristol down in a fundamental way. The PTSD and issues from the first series, in retrospect, are far less damaging to Hail than what she goes through, here. Wagers puts the effort in, and the page count. I had expected, going in, that time would pass quickly and Hail would, in terms of page count, get out of her situation in a relatively straightforward manner. This is not what the author did, as easy as that might have been. We spend a lot of time with Hail imprisoned,.and crumbling under the weight of events and her situation, and as said before we see the results of that.  This was not a pleasant book to read, but I can see why she did it this way. The damaged, fragile, changed Hail really resonated with me and I could and did buy in completely to her mental state because of how much we spend in breaking her down.

The issue of course is that on top of being a book for itself,  this is a bridge book to book three and in a sense its a book that “needs” to be gotten through in order to read the third book. Given my experience with the first trilogy, the emotional beats, particularly will really influence and inform Hail’s decisions in the third book, and so from that perspective, I do think it is good for readers of the first book to read this one and not jump to the third, if they can.

If I didn’t make it clear, for all of its unpleasantness and tough subject matter, it is excellently written. I am not sure that this would have worked as a novel without four previous published novels under her belt. Now, with the confidence and experience of those novels, Wagers is able to write this book, and write the book that needs to be written for this part of Hail’s story.

Ultimately, Down Among the Dead painfully shows the costs and consequences of war and privation, in an intense and abiding way. It’s not a book that I am eager to ever read again, but it is a book that the author can take pride in. I AM looking forward to the third book in the series and where she takes Hail and this universe.

Bonuses: +1 for an unflinching look at a character with a less than healthy mental state and having the guts to take that on.

Penalties: -1 for a book that is essential in the series but not very pleasant to read
-1 for some middle book syndrome issues, especially given the plot.

Nerd Coefficient: 7/10: An enjoyable experience but not without its flaws