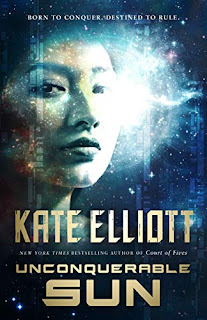 In Kate Elliott’s long career, her work has mainly conquered vast realms of fantasy. From the Crown of Stars series, treading ground familiar to readers of A Song of Ice and Fire, to the Crossroads series (including the recent Black Wolves) with Demons, intrigue and Giant Eagles, to the gonzo Icepunk Alternate History Fantasy Spiritwalker series featuring delights such as lawyer dinosaurs, the inventiveness of Elliott’s fantasy work is unmistakable. Oh and then there is the YA Court of Fives Trilogy, too, with a fantasy world inspired by Ptolemaic Egypt.  However, she has written Space Opera too, earlier in her long and storied career, in the Jaran Tetralogy and the Highroad Trilogy.

Now, in Unconquerable Sun, Kate Elliott returns to the realm of Space Opera with perhaps one of the best elevator pitches I’ve ever read: Genderflipped Alexander the Great, in Space.

Readers of Elliott’s work know that her worldbuilding is deep and infused with real world inspiration, given a fantasy turn and Elliott’s eye for societies that either are more egalitarian, or look long and hard at the role of marginalized members of society, particularly women. So what does a Genderflipped Alexander the Great story in space actually MEAN in a Kate Elliott novel? We are introduced to the Republic of Chaonia, ruled by Queen-Marshal Eirene. The titular Sun is her daughter. In this, Elliott genderflips the relationship between Philip II of Macedon, and his son, Alexander. Sun’s father, Prince João maps in some ways to Olympias, Alexander’s mother, especially in being a relative outsider to the Republic’s court. Given that he is not Chaonian, Sun’s status as Heir to her mother is something that could be under theoretical threat if, say, Eirene were to marry a full blooded Chaonian and have a child by them. Even with her heroics at a recent battle, Sun is keenly aware of the political threat when her mother does indeed announce that she is going to take a wife, Manea Lee. The Lee Family, in addition to having a long and storied place in Chaonian history and power, also are the spymasters of the Republic This allows Elliott to use Sun’s considerable temper, a notable and well used character flaw in the novel, to help propel the plot.

The use of Manea as a stand in for the real life Cleopatra Eurydice of Macedon, and the apparatus of Lee House gives Elliott a chance to use her other main point of view, Persephone Lee (or as her chapter titles call her, The Wily Persephone). Persephone is, when we meet her, under a false identity at a military academy, having gone on the run from her own family, not wanting to be part of their endless political machinations, and as a way to honor her dead older sister, Ereshkigal Lee. (see the name parallel?) . Persephone soon finds that her family has known where she was for some time, and “just when she thinks she’s out, they drag her back in” to Lee House and their machinations. Persephone provides an interesting contrast to Sun, both in her own individual thread and when events bring them together. Sun is confident, bold, strong, dynamic and grasping and very wilful. Some of the DNA of her Highroad series protagonist Lily Ransome (as well as of course Alexander himself) are definitely within Sun. By comparison, Persephone is a child of her House even when she is trying to make it that she is not--educated, calculating, intelligent, cerebral, and cunning, living up to her author-given epithet of Wily.  Sun has understandable trouble in trying to trust Persephone, given events. While Sun is definitely a Sun in that many characters orbit her (especially her Companions, a way to rework the Companion Cavalry into a Household system of giving important nobles official “friends”), Persephone, too, proves to be a leader and pole for the novel, although in a lesser way.

And while a lot of the personal plot and conflict are forged in the Eirene-Sun relationship and that provides a lot of the drive of the novel, the Chaonians are not alone in this universe. On their borders are the Phene Empire. The Phene once vassalized Chaonia (as the real life Persian empire did so to Macedon) and seek to put the bootheel back on the Chaonians once more, and perhaps go further and avenge their defeat at the hands of the Yele League (the Greek City State analogue). Their machinations, both the overt military threat and more subtle plots and plans they have in motion are the external pressure on the characters and the plot.

And there is just so much goodness here in the world that Elliott has built. There are some things about Alexander and his world that seemingly would not map well onto a FTL interstellar civilization. Elliott gives us multiple methods and challenges of interstellar travel, finding a solution to the problem of how fleets of ships can plausibly have conflict in the vastness of space. The Beacon system reminds me of the Alderson Points in the Pournelle/Niven Empire of Man verse, although Elliott’s universe has additional surprises in store in how her beacons can work,their origin, and how they can be circumvented. The space battles themselves are not Star Wars dogfights, and they are not the hard SF relativistic space battles of The Risen Empire, but occupy a middle ground that gives somewhat of a WWII Carrier fleet action feel, with broad tactics and strategy emphasized over individual broadsides and single ship actions  (More Jack Campbell than David Weber) . There is also ground actions and tactics, and again, Elliott is either interested in the personal costs and struggles, or the broad strategies than so much individual unit tactics (although there is a very clever use of an improvised weapon that helps save the day in one situation, it must be said).

Elliott’s worldbuilding goes far beyond the warfare and into every sphere of the world that she has created. One I want to mention is her use of the idea of Channel Idol. How does one try and come up with an interstellar idea of Arete (excellence) in a way to mirror Alexander’s rise to power, fame and reputation? Easy. Create an interstellar network of news and entertainment called Idol. Add in a Eurovision like contest called Idol Faire. The fact that Handsome Alika, previous winner of Idol Faire, is one of Sun’s companions makes the next steps obvious--of course Sun would manipulate Idol to burnish her reputation. It’s a fascinating mirror at our own society, sometimes obsessed with celebrity, gossip and trivia, and shows how someone as driven as Sun can and would use such a system to her own advantage. In some ways, Sun’s relentlessness makes her a character that often pushes very hard indeed, even into spheres where you would not suspect. And there is much more, the novel having plenty of references and allusions outside of Alexander’s life that bore into the worldbuilding to various depths, from the role and use of religions, to the history of how man got here and plenty more. I could write an entire review just focused on all of the bioengineering, genetic manipulations and how they are used to worldbuild, create characters, and drive the narrative. (Really, that in itself is a whole strand of the novel that intersects in very different and interesting ways with Sun, and with The Wily Persephone).

Going in I wasn’t sure where in “Alexander’s life” that Kate was going to set this. Even in a short life such as Alexander’s, I think the woman on the street’s conception of Alexander the Great, if dimly remembered from school or maybe the Oliver Stone movie is that he “conquered Persia” . There is plenty of life before then and setting it in the time frame she does, Elliott provides plenty of interpersonal conflict and character interaction for the reader to sink their teeth into, The novel proves that an Alexander the Great story doesn’t have to be about the tactics and battles (although they certainly there) and that Sun’s personal life, drives, goals, desires and how they mesh with her family, her Companions (really a form of found family--another theme the novel works with) are as compelling as fighting the Phene.

A new Kate Elliott novel for me is always a moment of joy for one of my heart authors. Unconquerable Sun IS the first in a series and doesn’t provide any easy escapes for someone who wants to try Kate Elliott and have a complete story in one go. It would make an intriguing place to start your reading of Kate Elliott, though, if you have not tried her work before, but do know that it ends on a note of “more to come” and you will have to wait impatiently like me for the next volume in the series (on the other hand, you will have time to dive into her oeuvre in the meantime).

Bonuses: +1 Strong use and understanding of tropes and genre conventions; +1 Clockwork plotting and page-turning layout of events

Penalties -1 No offramp for readers who want a one book experience (which is something that Elliott doesn’t generally write, to be fair)