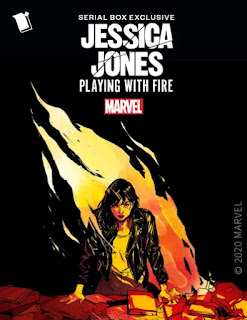 "The safe choice? Walk away. But when has Jessica Jones ever played it safe?


Jessica Jones has made an art of ignoring her particular brand of super-powered trauma. But these days, she's giving the whole "self-care" thing a try. Seeing a therapist, finding healthier coping mechanisms (read: no business-hours drinking), working toward not wanting to punch things all the time. Maybe even taking the occasional case that won't eat her alive. A simple missing persons case seems like just the ticket. But when a boy's body turns up under an overpass in what looks like a cut-and-dried OD, Jessica can't let it go and dives headlong into an obsessive search for answers."

Marvel's Jessica Jones: Playing With Fire launched on Serial Box on May 28th, with new episodes available every Thursday.   Jessica Jones' dry sense of humor,  her brand of "self care", and a simple missing person case, what could possibly go wrong? (well, everything of course, and that's what makes this so addictively entertaining!).

The 16 epsisode season was written by Lauren Beukes, Vita Ayala, Sam Beckbessinger, Zoe Quinn, and Elsa Sjunneson, and narrated by Fryda Wolff.   When the publicist reached out to see if I'd be interested in interviewing Beukes and Wolff, I jumped at the chance.  You know Lauren Beukes from her novels Afterland, Broken Monsters, The Shining Girls, and Zoo City.  You know Fryda Wolff from her voice acting work in the video games Darksiders Genesis,  Bloodstained: Ritual of the Night, Fortnight, and many others. She's also the voice of Moxie, an AI companion for kids.

Beukes and Wolff were kind enough to answer my questions about writing for audio, getting to write in the Marvel Universe, home audio recording, collaborating with other writers, and so much more. Because they both have drasically different roles in the creation of Marvel's Jessica Jones: Playing with Fire, I was able  to ask each of them different questions. 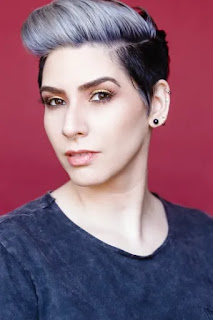 NOAF: Some voice actors and audiobook narrators will study the material closely before doing the recording, others barely look at ahead of time in hopes of recording their authentic reaction. Which is your preference?

Fryda Wolff: For audiobooks it's always recommended the actor read the material in full before recording, because otherwise you'll find yourself reading page 300 and suddenly you see " . . . he said, in his strong French accent." And oops you've been performing that character in your natural accent because you didn't have this information before. Luckily for me, Jessica Jones: Playing with Fire was written in short, digestible chapters, so I had plenty of time to go through the script before we got to work.

NOAF: Were you a Jessica Jones fan before recording this show for Serial Box? Did you do any special research to make your voice match Jessica's world?

FW: I had seen the first season of Jessica Jones on Netflix, and found it so intense I could only watch maybe 20 minutes of an episode at a time, but I did eventually get through it. The acting was top notch, which is why it put me on edge. I started season two once I was confirmed for this serialized fiction, and it put me right back in the world. My personality's baseline is to be cynical and jaded so playing Jessica's not a stretch for me, which helps.

FW: The opening scene (which is available to preview) where Jessica’s fighting thugs in an ice cream truck sets the tone for the story. Absurd things might be happening but Jessica's gonna Jessica and tell you what's up in a flat tone, as she's the unflappable straight woman. Getting to say absurd things with a straight face is always a fun challenge.

FW: With real estate prices being what they are in Los Angeles (single family homes in my neighborhood start at around $1.5 million), I rent a two-bedroom apartment. There are loads of options you can find online if you're in the market for a prefabricated vocal booth. Mine happens to be from VocalBooth.com, though I would rather have purchased from Studiobricks.com. Traditional vocal booths made from wood require a team of people with muscles and power tools to assemble and disassemble, they're an enormous hassle. My 4x6 vocal booth weighs about 1700 pounds and so it must be on the first floor or it will crash through a second floor. Whereas Studiobricks are lightweight panels made from foam and can be hammered together with a mallet. Having a vocal booth is a job requirement for a voice actor. I bought the booth originally so I wouldn't have to record during a certain time of day or night, or wait for the sounds of lawnmowers and barking dogs to stop, so I could ensure my auditions would be high quality.

The investment has since paid itself off many times over, and now that we're in a work from home scenario due to the COVID-19 pandemic, I was already prepared to record studio quality audio for clients from home.

NOAF:Your previous career was in video game design, and video game sound design.  In your opinion, how have video games evolved over the last ten years? Where do you think they'll be 15 or 20 years from now?

FW: I think art and media evolve together as they’re a direct reflection of what artists were feeling in the time they were made. Now that some game companies are making the effort to have more diverse hiring, we see better inclusion in the writing. Technology has always pushed towards the cyberpunk aspiration of making the virtual more real, so we see expanding tech and titles in the VR space. We also have accessibility for tools, like free or subscription-based game engines and middleware. Many universities as well as specialized vocational schools teach various facets of game development. You can also now crowdfund to finance your project, rather than be solely at the mercy of a publisher’s investment.

Ten years ago, some of these advantages were just a dream. Years from now, I expect we’ll see even more interesting, stimulating and diverse storytelling. VR tech will be cheaper and perhaps most households can afford a set, maybe schools will issue them to kids for distance learning and homework. Maybe coding and game development will be taught in primary schools as a standard. Performance and motion capture tech will also get cheaper over time; maybe you'll be able to mocap and animate your own game at home, even if your budget is small. I think accessibility and diversity are the keys to expanding games as a medium, and if those principles are supported then the artistry can only adapt and grow. 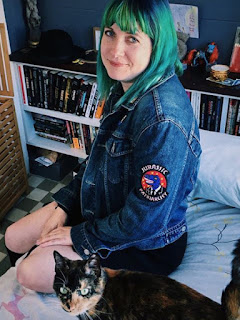 NOAF: Were you a Jessica Jones fan before you worked on this project?  What kind of research did you do, to really get into Jessica's mind?

Lauren Beukes: I'm a huge fan of the original Bendis comics and the TV show, but I also have a deep love for noir, which does not, nearly, have enough troubled female detectives, so it was a thrill to be able to play in her universe and her head.

NOAF: What was it like, to collaborate with so many different writers, and to write in someone else's world?

LB: I love collaborating. It's possibly my favourite thing. Other minds are amazing and surprising, and it means you might get stuck sometimes, but you're never stuck alone. I loved working with these brilliant people, their unique perspectives and voices and insight. It was very much gestalt – more than the sum of our parts.

NOAF: How did the team decide who was going to write which episodes?  Any funny stories about how particular scenes were plotted out or designed?

LB: We settled it with an old-fashioned rage-in-the-cage, home-made weapons, anything goes, no backsies. No, that’s not right. We used our words and talked it out. What was interesting was how particular episodes really resonated with different writers. It was very organic and democratic. Elsa was excited to write the Matt Murdock chapters because it's the first time the blind Daredevil has been written by an actual blind writer. Vita called dibs on the big fight scene, and Zoe wanted to delve into the psychological trauma and head games. I wanted to kick it off, set the tone and then we brought in another wonderful South African writer, Sam Beckbessinger, post-writers room, to write some of the later chapters.

NOAF: Did the episodes you wrote have to be a specific length? Did this cause any unexpected challenges?

LB: Serialized fiction is not for scaredy cats. We had to ensure the chapter were short and punchy enough for audio, but also end on a high note, or a low one, that will propel the audience to the next chapter. It’s about telling compelling and compulsive stories.

NOAF: Knowing that the final product would be an audio recording, did you need to make any changes to your writing style to accommodate the change in medium? How (if at all) was writing for audio different than writing a novel?

LB: I've written for animation and most of my novels are in audio too, so I'm used to thinking about the weight of words and how things sound, but I did have to suppress my natural instinct of going on for a full page of dialogue with no breaks.