One constant that has been keeping me sane lately has been the fact that there is a strong contingency of great individuals who come together for positive change in the face of darkness. Back in April I wrote about how we can work together to help the comic book industry during a pandemic, and this week flipped the script as the industry rallied to raise money for Black Lives Matter. Fans have the opportunity to secure some very special pieces while supporting a great cause.

The Black Lives Matter foundation describes itself as "a global organization in the US, UK, and Canada, whose mission is to eradicate white supremacy and build local power to intervene in violence inflicted on Black communities by the state and vigilantes. By combating and countering acts of violence, creating space for Black imagination and innovation, and centering Black joy, we are winning immediate improvements in our lives."

#ComicWritersChallenge:
Comic Book author Gail Simone is currently rallying her fellow creators to auction off a piece of beloved art to raise money for Black Lives Matter.  Her first auction raised over $7,000 and if you follow the hashtag #ComicWritersChallenge on Twitter you will find a host of auctions that are all for an amazing cause.  Author Greg Pak offered up an original page from Incredible Hercules #126, and artist Sandy Jarrell has an auction for an original page from Bombshells United 6 featuring the first appearance of Bombshell Bumblebee.  The amount of new auctions that have been popping up are overwhelming so a kind fan created a Google Doc to track bids that you can check out here.

Birth. Movies. Death.:
While not entirely comic book related, but swimming in the same lane for the most part, Birth. Movies. Death is following up a successful fundraiser for the Texas Civil Rights Project with another amazing fundraiser benefiting Black Lives Matter.  Every donation of $25 to BlackLivesMatter.com gains you an entry for one of 15 stellar prize packages.  My most wanted is a set of Tyler Stout Star Wars posters from Mondo, but others might prefer the Blade Runner Blu-Ray set, the Doctor Strange print from Daniel Danger, or the Criterion Godzilla Blu-Ray set to name a few. 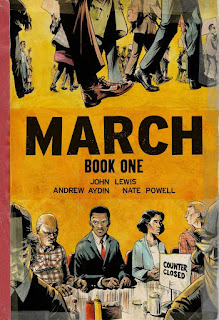 Recommended reading list:
March by John Lewis and Andrew Aydin:
This book is an autobiographical comic about the Civil Rights Movement told from the perspective of John Lewis. Lewis is a current member of the U.S. House of Representatives and this series chronicles his role as a civil rights leader starting with the "Bloody Sunday" incident in Montgomery Alabama.  The collaboration of Lewis and Aydin will hopefully introduce these stories to a more widespread audience.