I haven't had the best reading month in June, and coupled with this being the earliest possible "Last Thursday", I am in the sorry position of having not read enough short fiction for a normal roundup. Not to worry, though, because it turns out there's been some fabulous novellas to keep us all entertained, so consider this an impromptu "Questing in long shorts". Questing in fabulously tailored capri pants, if you will.

I've got some treats lined up on the short fiction front, so I may be back with a special edition in the middle of next month, or you may have to wait for a bumper edition in July. Either way, let's get to what we've got this month: 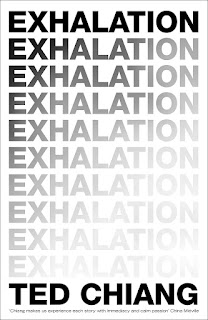 Ted Chiang's authorial output is famous both for its relative sparseness, and for the fact that almost every individual story hits it out of the park in their exploration of various science fictional concepts. This collection, of nine mostly longer stories, definitely lives up to the hype, with a number of stories that focus on free will, religious belief and tests of faith, and our connections across the boundaries of species and life-altering technology

The reason I read this now, of course, was for its Hugo nominated pair: "Omphalos" is the story of an alternative earth in which the evidence of divine creation a finite period of time ago is evident all over the natural world, from ancient trees which stop containing rings eight thousand years ago to human skeletons which show no evidence of having grown form childhood. In a world where religiosity is therefore far more prevalent going into the 21st century, a discovery by an astronomer threatens to overturn humanity's confidence in itself at the centre of creation. It's a story that thematically pairs nicely with another free will explanations in here, notably "The Merchant and the Alchemist", an Arabian Nights-style nested story about time travel in an immutable timeline; in both, characters have the foundations of their beliefs about humanity challenged, but we come out with a feeling that the potential of their future is undiminished. "What's Expected of Us", one of the collection's flash-length pieces, offers a far less optimistic view.

The Hugo nominated novella, "Anxiety is the Dizziness of Freedom", also looks at free will, this time in a world where a technology, "prisms", exist to allow communication between two diverged quantum timelines, letting people try different, branched-off lives but also opening up a host of new ways for people to feel anxious, dissatisfied or unhappy about their lives (I appreciated that a significant part of this story happens in group therapy, normalising the fact that envy between life paths is something to be taken seriously in this world). The storyline of the novella follows a minor con artist and his assistant, who discover they have access to a prism that could be hugely valuable to the right buyer. What really makes this story tick, though, is not how that story plays out, but all the meetings and partings and intersections with other people trying to live their lives in a world where humanity's concept of our individual choices have fundamentally changed. It's understated and quietly powerful and, quite simply, an excellent story to round off an excellent collection. 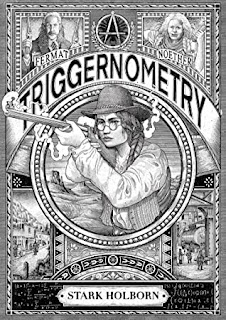 Triggernometry is an alternate history Western in which, by some mysterious quirk of history, mathematicians have been outlawed and pushed into criminality, shunned for their wanton ways;  are now wandering around the Wild West trying to stay one step ahead of the law. When "Mad Malago Browne" is approached by her old partner Fermat (yes, that Fermat) for one last job, it draws her into a heist which could set them up in comfort for the rest of their days - except, when does that ever work? What follows is a series of double crossings, dangerous old friends, stand-offs, and plenty of nitroglycerine fun, as Browne and the crew attempt to win (or at least survive) the day.

The Weird Western setting isn't new to author Stark Holborn, who previously wrote the Nunslinger series, and the worldbuilding here is not deep, but it sure is fun. It's not entirely clear how maths became associated with sin and degeneracy, but Holborn leans into the ways it might be considered an unsavoury profession when it comes to the gunfights and other battles: characters calculate angles, defy odds that they know better than anyone, and even pull out their protractors in ropey situations to line up the perfect trick shot. Balanced against this is just enough backstory about Browne and de Fermat, and the other mathematicians (many of whom live in the outlaw town of Faculty) to make them sympathetic despite all the shooting and backstabbing. There's a sour note here in that I'm not sure the Western genre needed speculative elements that skew it more towards whitewashing, but this isn't a book that's setting out to overturn every stone of genre. All in all, I respect Triggernometry for doing what it says on the tin: zippy, fun adventures with bandit mathematicians. 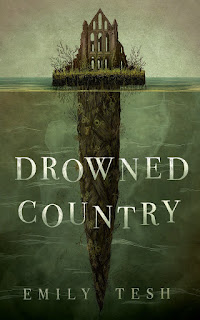 Drowned Country returns to the world of the Hallow Wood, two years since we last left Tobias Finch and Henry Silver after confronting the dark forces of the forest. The experience has brought them together, but it's also left them both in a very different situation to the one they were previously in (spoilers ahead!) - Tobias has now been freed of his position as the keeper of the wood, but has instead passed it to Silver, who is now contemplating life as an immortal forest spirit and speculating on when, exactly, he ought to give up on his humanity and accept his decline into otherworldly madness. When his mother marches back into his (crumbling) house and demands his help with her latest monster hunting mission, Silver finds himself reluctantly back with Tobias - who now works for Mrs Silver - and agreeing to help face down a 900-year-old vampire in a nearby town. Except, the vampire isn't the real story here, and the woman he's captured has grand schemes of her own to put into motion.

I'm unusually deep in my feelings for romance at the moment, so Silver and Tobias' journey was very compelling to me, especially as the circumstances surrounding the pair's separation come into focus, and we realise what a challenge the ending of Silver in the Wood left them both. This continuation lets us see the difference between Tobias' tenure as the forest guardian and Silver's, and the different ways they cope with becoming something powerful and not-human against their will. Inevitably, Tobias has quiet but strong feelings about how Silver uses his power and their quiet longing and distrust makes for a beautiful exploration that underpins both the supernatural and the irritating human side of Drowned Country's story. While Silver and Tobias' story feels like it's now been told, I hope this isn't the last we've seen of this queer iteration of faerie, and especially not of Mrs Silver or her brilliant new assistant.


POSTED BY: Adri, Nerds of a Feather co-editor, is a semi-aquatic migratory mammal most often found in the UK. She has many opinions about SFF books, and is also partial to gaming, baking, interacting with dogs, and Asian-style karaoke. Find her on Twitter at @adrijjy.
Posted by Adri Joy at 12:00:00 AM