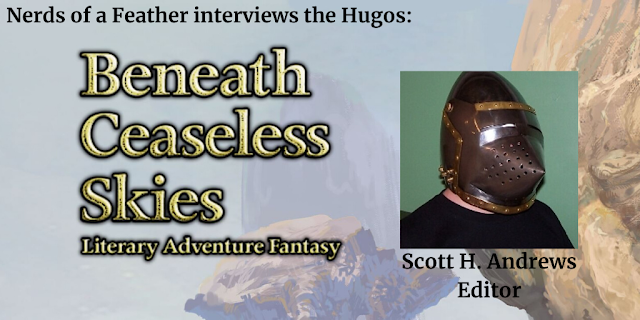 Congratulations to Beneath Ceaseless Skies for their Hugo nomination for Best Semiprozine!

Beneath Ceaseless Skies was started in 2008, and since then the magazine has published original fiction every two weeks, along with artwork and audio podcasts. Full issues are available as ebooks as well.  Dedicated to literary adventure fantasy, the magazine has become famous for character focused fantasy and for showcasing first sales by authors who went on to become best sellers and award winners. Authors who have appeared in Beneath Ceaseless Skies include Seth Dickinson, Aliette de Bodard, Troy L. Wiggins, A. Merc Rustad, Tony Pi, Yoon Ha Lee, Rich Larson, Benjanun Sriduangkaew, Rachel K. Jones, and so, so many more.

Scott H. Andrews has been the Editor in Chief and Publisher of BCS since the magazine's start. He lives in Virginia with his family, overflowing bookcases, and hundreds of beer bottles from around the world.   His short fiction has appeared in Weird Tales, On Spec, and Space and Time. You can learn more about him at his personal website ScottHAndrews.com, and by following him on twitter, @Scott_H_Andrews.


Let's get to the interview! 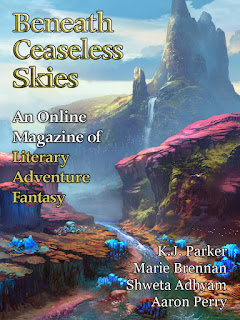 NOAF: Why did you start Beneath Ceaseless Skies?

Scott H. Andrews: I started BCS back in 2008 because there was no magazine that was publishing what I wanted to read--character-centered fantasy set in other worlds. There was character-centered literary fantasy, but most of it was slipstream or fairy-tale retellings, which for me didn't have the awe that I feel in otherworldly settings. There was secondary-world fantasy, but most of it was swords & sorcery or purely adventure. A few magazines would publish one or two stories a year that were character-centered fantasy set in other worlds, but there was no go-to venue for that sort of story, for writers to submit to or for readers to read. But I knew many writers of literary fantasy who loved to read epic fantasy novels or who had grown up playing D&D, so I expected that there would be an audience for character-centered literary fantasy set in others worlds and there would be writers who would love to write it. I'm delighted that, twelve years and over 650 stories later, that was the case.

NOAF: Beneath Ceaseless Skies publishes fantasy with a literary bent, “literary adventure fantasy”. What exactly does that mean? As an editor, what are you looking for?

S.H.A.: "Literary adventure fantasy" is my tagline for character-centered fantasy set in other worlds or secondary-world settings, as Tolkien called such settings. The character-centered part is crucial for me. The major thing I value in fiction is "the human heart in conflict with itself," as Faulkner put it in his Nobel Prize acceptance speech. Fiction affects me most intensely and profoundly when it features a character who is dealing with some sort of conflict, whether an external struggle like plot obstacles or an internal one like trying to overcome flaws or to grow in relationships, or ideally both. A Realist focus on character, and set in some paranormal historical world or invented world that's different from our primary, real world and makes me feel awed and engaged. Another way I articulate it is "Realism in worlds that aren't real." I want to be moved by the character and awed by the setting.

S.H.A.: The Science-Fantasy Month special issues are stories that mix fantastical things with futuristic technology or societies. For me, a classic example of that mix is Dune. The setting has futuristic technology, but most of its science is so far beyond our real-world realities that it's fantastical. Despite the futuristic technology, those stories for me share a lot with secondary-world fantasy. Dune to me has a lot more in common with Lord of the Rings than with most science fiction of its era. Their futuristic settings are just as awe-inspiring as fantasy worlds. Character-driven stories set in such worlds can be just as breathtaking as literary adventure fantasy and can comment just as profoundly on what it means to be human. So every two years, we run special issues of "literary adventure science-fantasy" if you will--character-centered stories sent in settings that are futuristic and fantastical. Many of those stories have been among our most popular. 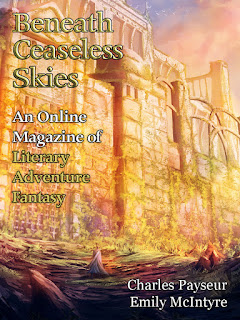 S.H.A.: My favorite thing about running BCS is finding a gem in the submissions; finding an amazing or brilliant story totally unexpectedly from someone I'd never heard of. I still remember where I was when I first read stories like that, such as Seth Dickinson's "The Traitor Baru Cormorant, Her Field-General, and Their Wounds," which Seth later expanded into a major fantasy trilogy. I also love building a relationship with writers, working with them on successive stories and watching them level-up as writers.

The hardest thing for me about running BCS is making sure that everything runs smoothly and on time. BCS has four first readers - Kerstin Hall, Deirdre Quirk, Rachel Morris, and Beth Horn - who reply to most of the submissions, with every rejection personalized, but everything else is handled by me--the editing, the sorting of submissions, the audio podcast, handling the artwork, running the website. The hard part for me is not just doing all that stuff but making sure that everything gets done and on time. I'm not perfect, but I do think I'm able to do a pretty good job.

NOAF: Some magazine editors/publishers have a large staff of associate editors, slush readers, social media editors, etc. From what I can tell, you do nearly all the heavy lifting at BCS yourself, including sending personalized rejection letters. I’ve got to ask - where do you find the time? What is a typical BCS week like for you?

S.H.A.: I do indeed serve as the entire main staff of BCS. Other than the four first readers, I handle everything else myself. One way I find the time is that I don't write my own fiction anymore. I don't recommend that, but it's how things turned out.

The major elements I face on a weekly basis are handling submissions, handling the publishing, and running the BCS Audio Fiction Podcast. For the handling of submissions, I read the opening of every sub that comes in, 250-300 a month, and assign it to one of the slush readers or pass it up to myself. I read all the pass-up stories and decide which ones to buy. I write personalized rejections, acceptances, or rewrite requests. (All the rejections from BCS are personalized, to every submission; all the rejections our first readers send are personalized too.) I edit the accepted stories and work on revisions for the rewrite stories.

For the publishing, I do all the line-edits and format the manuscripts for the website. I plan the schedule. I handle the contracts and payments. I do all the communication with authors, requesting author bios, etc. I source and buy and format all the artwork. I make the ebook files and distribute them to ebook vendors. I manage the website, all the posting and scheduling. I do the Facebook & Twitter posting and press releases, send out review copies, submit stories to juried awards.

For the BCS Audio Fiction Podcast, I do all the audio engineering, editing, and mastering. I'm an amateur musician, so I have more audio experience than most magazine editors or podcasters. I narrate some of the podcasts myself, and I try to use the audio medium to augment aspects of the narrator or the story's format or structure whenever there's a way that the audio format can do that.

NOAF: How has Beneath Ceaseless Skies evolved over the years? What directions do you see the magazine going in the future? 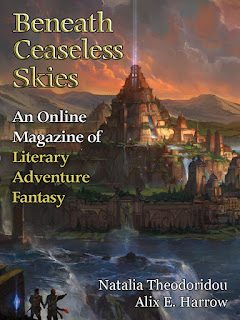 S.H.A.: The Science-Fantasy Month special issues are one way that BCS has evolved over the years. Those special issues were not in my original plan, but I was receiving in the submissions stories that were great literary adventure fantasy but set in futuristic worlds. So I had to buy the stories, then figure out a way to publish them. I always try to stay open to being stretched as an editor, beyond what I would previously have thought would be the edge of what I'm interested in.

I don't know of new directions that I could see BCS going in the future. The fortnightly consistency of over 300 issues in twelve years is a big enough task for me. I'm continually delighted that writers and readers enjoy BCS a great deal as it is, so my focus is on continuing to deliver great character-centered secondary-world fantasy stories.

NOAF: What will winning the Hugo for best Semiprozine mean for you?

S.H.A.: BCS winning the Hugo for Best Semiprozine would mean to me that the world has truly gone upside down, because I think it's very unlikely to happen.  I don't think a fantasy magazine has ever won Best Semiprozine, and there are so many great zines in the category, every year of the eight years BCS has been a finalist. It's an honor to be nominated for a Hugo; it's an honor to be considered among all of those great finalist zines and their great stories. It's an honor to have readers reading BCS every year; some of them new readers discovering it for the first time or reading it in the Hugo Award voters' packet. We often get tweets from readers and thank-you notes from writers, which is wonderful, to hear from people who love and appreciate what we're doing.

I bet that winning the Hugo would be like a thousand of those tweets or emails, all at once!

NOAF: Thanks so much Scott!