Aliette de Bodard writes speculative fiction: she has won three Nebula Awards, a Locus Award and four British Science Fiction Association Awards, and was a double Hugo finalist for 2019 (Best Series and Best Novella). She is the author of the Dominion of the Fallen series, set in a turn-of-the-century Paris devastated by a magical war, which comprises The House of Shattered Wings, The House of Binding Thorns, and The House of Sundering Flames (July 2019, Gollancz/JABberwocky Literary Agency). Her short story collection Of Wars, and Memories, and Starlight is out from Subterranean Press. She lives in Paris. Visit https://www.aliettedebodard.com for more information 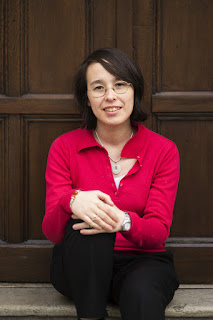 Today she shares her Six Books with Us

I'm currently doing comfort reads, which means I've embarked again on a reread of Alexandre Dumas The Count of Monte Cristo--Gothic quest for revenge is the best.

Kate Elliott's Unconquerable Sun¹, which is a huge space epic with a female version of Alexander the Great, fascinating and deep worldbuilding, and nailbiting action scenes. Also Perse (short for Persephone), the daughter of the House in charge of the secret police, is sheer delight: opinionated, resourceful, and very unimpressed by her own family.

Every few years I reread the Terry Pratchett books from start to finish, and I really want to do that again this year. It's become a bittersweet tradition since he died, and I'm not sure I can bring myself to reread The Shepherd's Crown at all, but all the other ones are sure to bring me joy and much sense of wonder (and much sharp commentary on life).

I bounced off Dorothy Sayers pretty thoroughly as a child: I thought her books were hard to read and the characters hard to get to grips with. But then I rediscovered them as an adult, and they're so great! (also it's scary how young Lord Peter is, I always thought he was in his forties but it turns out he's 33!) I love the Lord Peter/Harriet Vane relationship, and I'm now struck by how witty and how well written they are, and how they capture the mood of the years between the war in a really evocative way.

I think Ursula K Le Guin's A Wizard of Earthsea remains a major influence on me, especially its last scene when Ged finally realises that the shadow he has unleashed is his, and the darkness he thought was malice is also his malice--that moment of self-realisation had a huge impact on me.

My latest book is Of Dragons, Feasts and Murders. Dragon prince Thuan brings his brooding ruthless husband back to his childhood home in the imperial citadel: Thuan has braced himself for tense family reunions, but instead what they find is a corpse whose death they have to investigate.

It's Asian court drama meets High Gothic aka "husband and husband investigate a murder amidst court politics, and it looks like *family* is involved", aka "the diplomacy/MURDER pairing have to work together". There's kissing, sarcasm, and stabbing. I had a lot of fun writing it and putting together all my favourite tropes, and I hope you enjoy it too!

POSTED BY: Paul Weimer. Ubiquitous in Shadow, but I’m just this guy, you know? @princejvstin.
.
Posted by Paul Weimer at 12:00:00 PM