Mike Underwood’s Annihilation Aria melds the author’s deep and abiding knowledge of tropes and science fiction with an entertaining and rollicking adventure well suited to our time and moment. 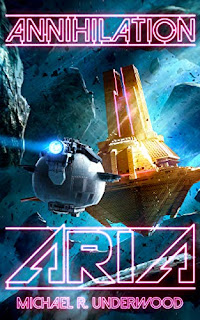 Max has a big problem. He’s an archaeologist  on the wrong side of the universe from Earth, amongst a variety of aliens,  having gotten there in an accident he hasn’t figured out how to reverse. Lahra has a big problem, too. She’s a out-of-bubblegum kickarse warrior of a species whose world was devastated by the top dog species in this galaxy, and is seeking retribution for what was done to her people. Both seem insurmountable problems, but this married couple have a potent and abiding ally in each other. They’ll;need each other, too, as Max’s latest archaeological find plunges them into intrigue, adventure and conflict that just might be the solution to their problems--or get them killed.

This is the matter of Annihilation Aria, by Mike Underwood.

Mike Underwood’s academic and writing background are very wedded and deep into genre theory and the use of tropes in literature. His Genrenauts universe is a set of stories about a group of researchers who quite literally walk into worlds governed by the laws of story, in order to improve life here on Earth. Thus, when the author comes up with a novel and starts using tropes and story constructions, I pay attention and look at what he is doing and how he is using the tools of tropes and genre to tell his story, because his use is careful, measured and deliberate.

Thus, Annihilation Aria has resonances, deliberate ones, with a lot of genre properties. Guardians of the Galaxy and Farscape are the two major influences one can see right away-- ordinary Earthling is on the far side of the universe with no good way to get back. Said Earthling does have some significant skills but the main thrust of people do not even know he’s from Earth or know what Earth is, and in some ways, he’s way in over his head. The way that the Earthling got to the far side of the universe is very plot relevant, now. He’s also genre-savvy and as an audience point of view provides an entry point into the verse we can relate with.

That’s Max. By comparison, Lahra is a “proud warrior race” character, in the mold of Aeryn Sun or Gamora (her skin is blue, so the Gamora resonance is strong). She has a complicated relationship with the rest of her kind. Her abilities contrast very well with the rest of the team, she’s the muscle, and also is bemused at best by the Earthling. Mike changes things up, from having her just be the possibly overdone “dour” type for warriors of all sorts. Keying into the title of the novel, Lahra has abilities that Max reads as a form of magic, the ability to buff her abilities by means of particular songs. “Sahvro’s Embrace” for example, boosts a Sergeant and her squad’s strength and resilience. Showing a keen sense of character, Max, it turns out, is about as unmusical as they come.

Showing his humor, there is a third member of the crew, a cybernetic augmented pilot who is cunningly named Wheel. While they seem like a “third wheel” at first, and they do run the ship (being the “Wheels” of the team)  they do have a personal plot and a background of their own that, in the course of novel, gets revealed. I don’t think Wheel, or some of the other characters in the novel quite rise to the level of Max and Lahra, but the author has clearly crafted Wheel and his characters to have depth and range and surprises.

The next genre reference shows Underwood’s craft. He could easily have set this early as a meet-cute, having Lahra and Max just getting to know each other, feeling each other out, animosity, sparks flying. Instead, Underwood goes for not the Mummy, but the Mummy Returns. Lahra and Max are already married, have been married for a time when the novel opens and they have a well developed but yet still evolving relationship. Underwood leverages the tropes of a married devoted couple who are seemingly mismatched in terms of skills and interest, but do work very effectively together. An early establishing scene shows just how well they do their thing in exploring ancient ruins, which stands in good stead for a shorthand and a model for subsequent similar events in the novel. The author is a fan of “explain how it’s done, summarize the next is done a similar way, and then show when carefully laid plans go pear-shaped, and now.

The inventiveness of Underwood’s worlds are another highlight of his writing, and once again, Underwood is leveraging the funof the novel’s inspirations and making them his own and his own twists on them. From the Wreck, the homebase of Max (which has resonances to Knowhere), to giant space whales/turtles, to ancient ruins,  secret resistance bases, and the dangerous Vsenk all show the author’s effectively envisioned imagination. For it being a full on space opera with some fantastical elements, the novel I read most recently that has a similar sort of vibe in the worldbuilding is Joseph Brassey’s Skyfarer, which if readers read and enjoy Annihilation Aria, might turn to reading afterwards for a more fantastical take on some of the elements of this novel.

So with all of these tropes and worldbuilding, what IS the story, and does it work? The author’s understanding of the mechanics of story is comparable to his knowledge of tropes. There are surprises, and unexpected turns, but the clockwork execution of the story and its beats is a joy to read. Max and Lahra start off in desperate straits, financially strapped, friends of theirs under threat by her as well. This squeezes the two of them and their cybernetic pilot, Wheel (think Pilot from Farscape but with a technological not a biological connection to their ship) to take riskier than usual missions in a set of  xenoarchaeological sites to try and come up with sellable items to get out from under Jesvin’s wings. This leads them to a site being monitored by the Vsenk (and an introduction to an antagonist point of view) and the novel launches into chase sequence mode, as Max works to try and find out what they have found and why it is so important, Lahra works to protect him, and Wheel has plans of their own. It’s an excellent engine for conflict and moving the plot along and the novel hums. It keeps the relatively light and fun tones of its genre inspirations in telling its story. Even as Max, Lahra and Wheel get deeper and deeper into trouble, the fun and lightness and character beats keep the pages turning. Max and Lahra have a supportive but not perfect relationship, and there are challenges to that relationship, and Max in particular worries  about its future, but it is not a constant downbeat through the narrative.

Annihilation Aria, then is for readers looking for a light and fun space opera with a strong genre-savvy vibe to it, a set of characters who interact in ways both familiar and interesting, and a clockwork plot that combined with the characters and tone, keeps the pages turning. The novel is clearly the first in a series, but the story as depicted in the pages is a complete one, down to the last paragraphs which draw a curtain around this tale for readers who do not want to continue on the adventure. I value offramps in first books of series, since in this age of so many works clamoring for attention, I want the option for “one and done” to be there. I for one, however, want to continue to follow the adventures of the crew of the Kettle and see more of the world and the characters Underwood creates.

Bonuses: +1  Strong use and understanding of tropes and genre conventions
+1 for clockwork plotting and page-turning layout of events

Penalties: -1 the characters other than Max and Lahra are not quite as strong as the incandescent pair at the center of the story.