Savage Legion is a stunning jump from shorter urban fantasy novellas to full on epic fantasy for Matthew Wallace, telling a multibraided story of Empire, Resistance, and Class conflict. 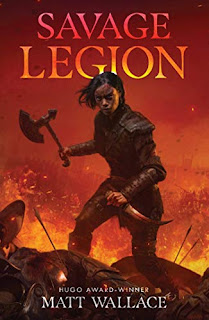 In a world where, Crache, a city and an expanding Empire fights against the dire threats that are far from the door but are ever present,.Evie has a problem. Living in the bottoms, a destitute and low class section of town, she is vulnerable to forced conscription. It is not even into the regular armed forces, the Skrain, either. Instead she is destined to the Savage Legion. The Savage Legion are treated poorly, given cast off equipment and are used as literal cannon fodder in human wave attacks softening up the enemy for the real army to demolish. Their lives are of so little worth that disciplinary methods including launching the still living Savage Legionnaire bodily by catapult into the ranks of the opposition. It’s a brutally unfair system, but Evie has a plan. For you see, she meant herself to be press ganged into this force, in order to stop it.

This is the world of Matt Wallace’s jump into Epic Fantasy, Savage Legion

The promotional matter of the novel that I received with this novel, and what I have seen on the Internet is more than a little misleading in suggesting that is the ONLY story.. I was going in expecting a focused narrow story of the front and center Evie, as she is inducted into the titular cannon-fodder Savage Legion and works her way to ending the mass conscription of the destitute and powerless in this endless drive for conflict and expansion. A major strand of this novel is exactly this--Evie is press ganged into the Legion and slowly starts to work within it, looking for her chance to blow the corrupted and twisted system apart. This thread is perhaps the one with the most verve, and power, and Evie’s story is strongly compelling.

The novel, however, is much more than this, much to my delight. A second strand involves the physically disabled Dyeawan who is caught up in the same sweep as Evie. Rather than being sent to the Savage Legion, she winds up in the diametric opposite of Evie’s situation, instead inducted into the halls of a secret society who are the true movers and shakers of civilization. It is here that she is tested, in mind, not body, and we get a behind the scenes glimpse as to what this society really is doing. Wallace respectfully and with care writes the struggles of a disabled protagonist very well here, not sugarcoating her real physical challenges, and showing how such a person can strive to become a person with agency, goals and power.

The third strand involves someone holding firm to a slipping position, Lexi. Her family has for years represented and given voice to the residents of the Bottoms, who else have no one to speak for them in the clan based (Gens) society that dominates this world. However, her husband, the previous Pleader, Lexi’s husband Brio, has disappeared, and so the status of not only Gen Stalbraid’s  ability to represent the Bottoms is in question, but their status as a Gens, a Clan itself is threatened. And so in courts and halls of government, Lexi strives to find out what happened to her missing husband, and to continue to give a voice to the otherwise voiceless. And of course, try and find out what happened to her husband.

Thus, the novel is a much more complicated and inventive novel than the title, cover and promotional matter led me and might lead you to believe. There are potent themes here that Wallace is exploring, the writer’s ambition to write a story that talks about some fundamental and difficult subjects, even in a secondary world setting far removed from our own, is done with verve, nuance and burgeoning skill. The role and power of the poor in society. Oppression, control of news and information, and endless war. The horror of war,environmental degradation, resource extraction and the uses of power. It’s a heady cocktail that Wallace plays with. It’s even more impressive with the savage and bloody battle scenes, the slice of life character moments, and the nuanced relationships that develop between various characters in the novel. While I am annoyed and call out again the novel is not what it seems to be, the action sequences are top notch, pulse pounding, and excellently done, a real highlight of the book.

One more thing I want to call out in the book, as implied above, is the diverse range of characters. In addition to numerous strong female characters, and a disabled protagonist among the three, we also have a nonbinary major secondary character. Taru’s life is not wine and roses, however, and Wallace gives a lens into oppression and bigotry toward nonbinary characters. It's a really clever bit of worldbuilding, not showing a society where people like Taru are universally accepted, but rather a world where there is the full range of acceptance, tolerance and dislike of those who are different, giving a lens onto our own world thereby.

Savage Legion is most definitely the best work from the pen of an author whose skills, to my eye, are growing by leaps and bounds.

Bonuses: +1 for strong use and exploration of themes
+1 for excellent action beats

Penalties: -1 for the promotional and other matter giving a strongly false impression of the book