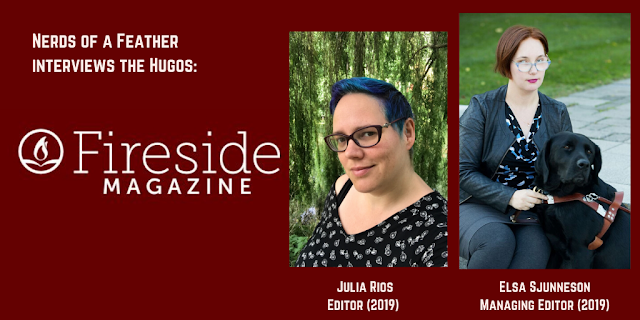 Congratulations to Julia Rios and Elsa Sjunneson at Fireside Magazine, for their Hugo nomination for Best SemiProZine!

Fireside Magazine started in 2012, and since then has grown into a monthly magazine, a website with weekly fiction and non-fiction, a podcast, and a quarterly digest, among other accomplishments.  Fireside prides themselves on their two major publishing goals: To find and publish great stories regardless of genre, and to pay their artists and writers well.

Fireside may have started small back in the day, but the magazine has grown quickly. In 2016 they added a third goal to their mission: To resist the global rise of fascism and far-right populism; and later that year the magazine published the eye-opening #BlackSpecFic special report. Fireside has featured fiction, essays, and poetry by Nghi Vo, Karen Osborne, Brandon O'Brien, Izzy Wasserstein, Sheree Renée Thomas, Jacqui Talbot, and Charles Payseur, to name just a few.

Elsa Sjunneson won a Hugo in 2019 for the Uncanny Magazine special issue Disabled People Destroy Science Fiction, and she has also won the Aurora and British Fantasy award. Sjunneson's work has appeared in Uncanny, Tor.com, The Boston Globe, and elsewhere. She has taught workshops with Clarion West and Writing the Other, and has presented work at The University of Chicago and The Henry Art Gallery. Her debut memoir, Alone in the Light, will be released in 2021. You can learn more about Sjunneson and her work by visiting her website, snarkbat.com or by following her on twitter, @snarkbat.

Julia Rios won the Hugo in 2017 and 2018 for her work with Uncanny Magazine, and she co-edited Kaleidoscope: Diverse YA Science Fiction and Fantasy Stories, which won the Aurelius Award and the Ditmar Award.   Rios' work has appeared in Apex Magazine, Daily Science Fiction, Lightspeed, and elsewhere. She is a co-founder of FuenteCo, which fosters hybridity in writing and other arts. Julia is a co-host at the Hugo nominated Skiffy and Fanty Show, and if you've listened to Podcastle, Cast of Wonders, Pseudopod, or the Strange Horizons podcast, there is a good chance you heard her voice as the narrator. You can learn more about Rios at her website, juliarios.com, or by following her on twitter, @omgjulia.

Elsa Sjunneson and Julia Rios were kind enough to answer my questions about their editorial voices, their own editing, special issues and important essays, among other fascinating topics. Let's get to the interview! 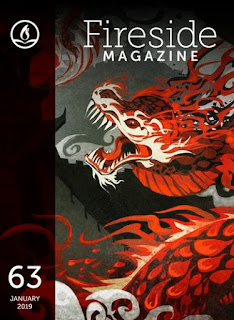 NOAF: Can you tell us about your role at Fireside Magazine? How did you get involved with the magazine?

Elsa Sjunesson: I started as a slush reader for Brian White back in I think 2014? I was there a long time! I then moved on to being the Assistant Editor, and when Brian White stepped down in 2017 I was promoted to Managing Editor. In all these roles I was a part of maintaining the voice and values of the magazine. I learned so much at Fireside and I’m proud of having spent the time there becoming the editor that I am today.

Julia Rios: I took over as Fiction Editor in 2017 when Brian White stepped down, and I edited all the fiction and poetry and essays (with the exception of those essays Elsa edited!) through the end of 2019.

NOAF: You are both award winning editors, for your work with anthologies (among other projects). How is editing a monthly magazine different from editing an anthology?

ES: As a managing editor it's a very different process. My job was less to edit (in the places where I did edit it was non-fiction work), but to help shepherd the magazine through the editorial process, from submissions, to the editorial selection process, and through copyedits. I was the person who kept an eye on the piece all the way to publication.

JR: Anthologies are complete units and have their own specific needs and voices and so on. Magazines are ongoing, so while they tend to have distinct voices, there is also room to explore and evolve over time. You can do a theme issue in a magazine without making a definitive statement about what the magazine is as a whole. For instance, in 2019, I did a Mexicanx theme issue for the month of September and a ghost theme issue for the month of October, but Fireside is not all ghosts or Mexicanx content all the time the way that an Ellen Datlow ghost story anthology is or A Larger Reality, the Mexicanx Initiative anthology edited by Libia Brenda was. 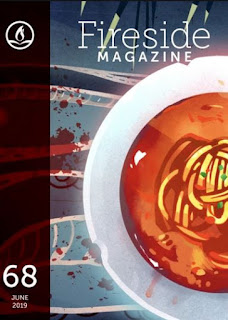 JR: When I came on board, Brian told me that he always wanted the stories to be gripping stories with beginnings, middles, and ends. I started from there, but as I stayed on the editorial voice evolved to include things like poetry. Elsa was invaluable as managing editor because she understood what kinds of things I was looking for and helped me choose stories. We had a shared vision for uplifting underrepresented voices. I’m not sure what the next editors' visions are, but I respect their other editorial work.

ES: Julia said everything I wanted to say, but I'll add this: at Fireside the goal from my first day to my last day was to give underrepresented authors a chance to shine.

NOAF: What pieces in Fireside are you particularly proud of?

ES: I want to step away from my direct editorial work to talk about the writing I did as an editor for Fireside for a second. One of the most important conversations that I started in our industry is the conversation about the use of the word "blind" as a publishing term. My piece "Blind Reading Is in Braille or Large Print" resulted in a lot of changes to the submissions statements of several magazines and I'm proud of using the space Fireside afforded me to create change.

JR: I genuinely love all the pieces I worked on. One of the great joys of editing is getting to work with awesome writers and share stories you love with the world. Of course I was extremely proud of Phenderson Djélì Clark's "The Secret Lives of the Nine Negro Teeth of George Washington" winning awards. Phenderson is an amazing writer, and we have seen more from him since then and I am sure we will see a lot more in the future. 2019 was the first year that Fireside provided audio versions of the texts, something that Elsa and I had advocated for because we cared a lot about accessibility. It was also the first year the magazine published poetry, which happened because Meg Frank, our marketing director at the time, shared my love of poetry and advocated for including it. We started out with an incredibly strong poem by Sabrina Vourvoulias. "Teeth" is … dare I say… biting? Okay, but seriously, it's a hard and sharp examination of the Latinx immigrant experience in the United States after 2016. On top of that, "Teeth" is beautiful and musical in its language. In 2019, I did my first translation work, translating a few stories from Spanish into English. I mentioned the September 2019 Mexicanx theme issue, and I am very proud of that one. I'm also proud of the essays by Layla Al-Bedawi (on losing native language fluency) and Elsa Sjunneson (on becoming a guide dog handler). I could go on indefinitely here. I was incredibly lucky to work with many brilliant writers, all of whom honored me by trusting me with their words.

NOAF: How is Fireside different from other projects and magazines that you have been involved with?

JR: Every publication is unique. I can't really find a good way to compare them to each other. Fireside was the first print magazine I worked with, though, so I suppose that is the easiest measure. 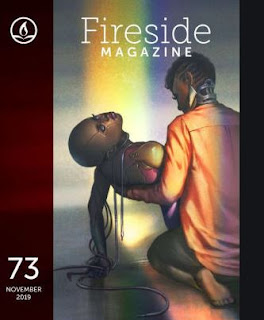 ES:  Right now I'm working at Uncanny Magazine as the non-fiction editor, which is very different because I am not dealing with the magazine protocols so much as my authors' words. It's definitely a different job, but one I'm enjoying!

NOAF: Four times a year, Fireside publishes a gorgeously designed print edition. How do the editorial and design processes differ, if at all, between the digital and print editions?

JR: I never handled anything to do with the design. My job was to select the texts and work with authors to refine them until we all agreed they were as strong as we could make them. The biggest difference came when Fireside started publishing a print issue each quarter because that was a change from the monthly issue ebooks that were available. This meant I had to think about how the contents of each month fit together (as usual), while also thinking about how each three month period worked.

ES: One of the challenges for me on print was that I am blind, so I definitely struggled with print, and the ability to navigate what was on the page versus what was on the site. I stayed on the site side of the process as a result. We did do a couple of pieces that were designed to do different things in print and online, notably Sarah Gailey's "STET" and Fran Wilde’s "Choose Wisely". We had discussions as a team about how to articulate a vision of each piece effectively for our audience, with varying degrees of success.

NOAF:  Thank you so much Julia and Elsa!